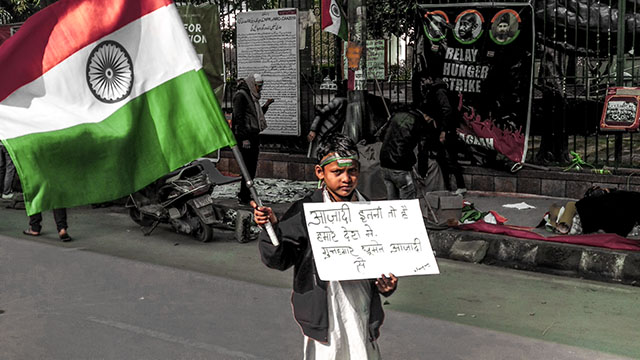 Jair Bolsonaro, the fascist dictator of Brazil, is the chief guest at India’s 71st Republic Day celebration on 26 January 2020. Bolsonaro juxtaposed along with President Ramnath Kovind, Vice President Venkaiah Naidoo and Prime Minister Narendra Modi — all three with their roots in the Hindutva fascist Rashtriya Swayamsevak Sangh (RSS) that despises the concepts of democracy, liberty, equality and secularism — can become the ideal frame to canvass the unity between fascists of different shades globally.

It’s the misfortune of Indians that on India’s 71st Republic Day, someone like Bolsonaro, who is severely criticised and opposed in Brazil and the entire world for his anti-people, pro-corporate policies and his attempt to burn down the entire stretch of Brazilian Amazon forests to help big corporations profiteer from the land and the mineral resources, will become the chief guest of a programme that celebrates India becoming a Republic, a dream that remained unrealised in the last seven decades at the grassroots.

On India’s 71st Republic Day, people will not just see Modi and Bolsonaro standing side by side and rejoicing India’s military might, which is used to suppress the democratic aspiration of the Kashmiri people and to farther the Hindutva fascist agenda of the regime, it will also see the rise of the alternative, the people’s struggle to reclaim their right on the Republic, long denied to them. On India’s 71st Republic Day not only the world will see two infamous fascist leaders waving before the camera, the world will also see the people of India, millions of them, on the streets, from Shaheen Bagh of Delhi to Lucknow’s Clock Tower, from Mumbai to Kolkata, demanding the rights guaranteed to them by the Constitution and preventing the Modi regime’s attempt to turn India into an official Hindu Rashtra (Hindu theocratic state). Two republics will face each other this morning, one gloating the repression of people, with military might, another upholding the cause of democracy, secularism, liberty and freedom. Two republics, one that despises the idea of Azadi (freedom), the idea of equality and is extremely bigoted, will face the one that despises bigotry, exploitation and oppression. This is the speciality of India’s 71st Republic Day, unprecedented in its history.

There is a clash between two ideologies on the occasion of India’s 71st Republic Day; the ideology that Bolsonaro and Modi represent, and the ideology that’s represented by the democratic and progressive forces from South America to South Asia. The people of India opposing the Modi regime’s conspiracy to divide the people and disenfranchise the poor may be geographically separated from the Brazilian poor and aboriginal people fighting for their rights and democracy, but they are connected with the spirit of democracy and freedom that they jointly aspire for. This international coalition of the oppressed masses can’t be defeated by the repressive state machines of Bolsonaro or Modi. At the end of the day, the idea of republicanism triumphs on the ruins of a fascist and tyrannical empire. The millions on the streets are taking that oath today. The people of Brazil and India will defeat the tyrants like Bolsonaro and Modi.