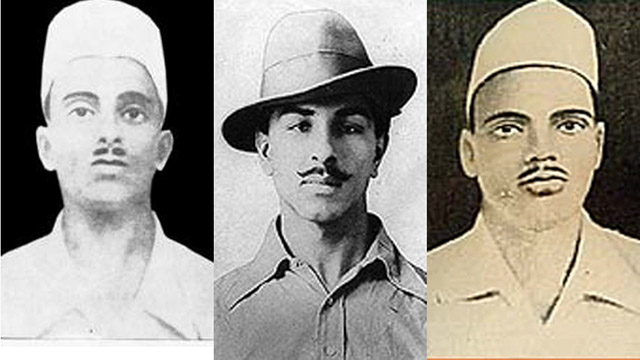 Bhagat Singh remains one of the most sought-after characters, the folklore hero of the Indian anti-colonial struggle, whose legacy is bitterly contended by the left and the right equally in Indian mainstream polity to gain credibility and milk people’s emotions. A lot has been said on the Rashtriya Swayamsevak Sangh (RSS)-led Hindutva fascist camp’s attempt to usurp the legacy of Singh, who was hanged on this day, March 23 1931, in British India’s Lahore Jail.

What’s left unsaid is how would one commemorate the martyrdom of Bhagat Singh, Sukhdev Thapar and Shivaram Hari Rajguru in the times of Coronavirus (COVID-19)? How to commemorate the martyrs of India’s freedom struggle when the word “freedom” is facing visceral hatred in Indian polity? How to uphold the ideals of Bhagat, Sukhdev and Rajguru when their ideals are mocked and trampled upon by feral Hindutva fascism-incensed mobs that go on berserk and massacre poor and hapless Muslims?

Prime Minister Narendra Modi‘s regime is using the panic over the global pandemic Coronavirus to push its own obnoxious agenda. Be it evicting the women protesting against the new citizenship matrix at Shaheen Bagh of Delhi and other locations using lockdown, or be it using the hullaballoo over the Coronavirus pandemic to lift crisis-ridden big corporations from the mire of economic uncertainty using money from public exchequer, the actions of the Modi regime validates what Bhagat anticipated for India in case it doesn’t go through a revolutionary reconstruction of the society.

Singh was only 23 when he was hanged along with Sukhdev and Rajguru. His words were far mature than him, so was his resolution. In modern India, in Modi-fied India, Bhagat won’t find a worthy place for himself as he would loath to see the middle class, the so-called educated section of the land, clanging utensils, blowing conchs and clapping from their balconies to scare off the Coronavirus outbreak. He would’ve been angry to find supremacy of mediocrity in the society. Bhagat, Sukhdev and Rajguru would despise the fact that thousands of Muslims are left to fend for themselves in relief camps after they were rendered homeless due to a state-sponsored pogrom targeting them.

Forget socialism, for which Bhagat and his comrades fought and devoted their lives, present India, ruled by utmost fascists, can not even guarantee the rule of common sense as fascism’s efforts to manipulate public opinion and actions through psychological domination and titillation continue unhindered, unapologetically. So apart from the reign of extreme economic inequalities, modern India under Modi also makes extreme the social inequalities by depriving the Muslims, the marginalised castes and communities the access to a dignified human life. Could Bhagat and his comrades stand this utmost capitulation of sense and sensibility to fascist whims? They wouldn’t have tolerated it for a moment.

Moreover, at the time of an epidemic when the ruling Modi regime is passing the buck of safeguarding public health to the court of the people themselves, without allocating enough resources to check the spread of Coronavirus and the RSS-led Hindutva fascist camp is keen to promote pseudo-science to peddle its obnoxious agenda of Hindu supremacy, and when the educated, privileged, upper-caste Hindu middle class has shown how its inanity and visceral hatred against the marginalised Muslims and ostracised dalits make it a puppet of the regime, the inept and nonchalant attitude of those in the left regarding the simmering global healthcare threat posed by Coronavirus outbreak and their cocooning due to fear for life, is leaving the poor masses in greater distress and in an absolutely disarrayed state. Could Bhagat or his comrades tolerate such cowardice?

While Bhagat and his comrades remained at the forefront of movements against communal violence and helped people in distress, they wouldn’t have retreated from serving the people, from helping the poor during the hours of an epidemic like Coronavirus. By leaving the people at the mercy of the RSS-led thugs and Modi’s utensil-clanging nincompoops, the present-day left is actually abandoning the very class that could have given it the required momentum to overcome all adversities and wage a successful struggle to establish a society that Bhagat and his comrades dreamed of while kissing the hangman’s noose. Can we really invigorate the slumbered cells of Bhagat Singhs in ourselves? Or “Aye Bhagat Singh tu zinda hain” (Bhagat Singh you’re alive) will only remain a song? It’s time for the left to overcome fear and support the poor survive the Coronavirus epidemic because without them Bhagat’s dreams won’t be realised.