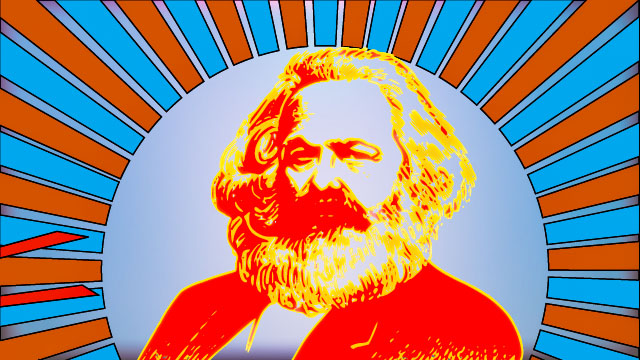 Karl Marx is 202 today and after celebrating the bicentenary of his birth two years ago with much hullaballoo, the academic Marxists, who are divorced from the practice of class struggle, do not remember him any more now. They probably even don’t remember (or care) that it’s the bicentenary of Marx’s life-long comrade-in-arms and friend Frederick Engels. Celebrating Marx is a cosmetic affair in the present scenario, where even the utmost anti-Marxist liberal democrats hail him, and a batch of so-called left eulogise him and locks his theoretical gems in the sanctum sanctorum of their academic temple, denying the marginalised, exploited and oppressed people access to the man who lived and worked for them tirelessly.

Being a Marxist has been, of course, a fashion since Marx’s time, yet, a very little number of his followers could grasp his theory and practice it effectively to bring forth a major change in the world. From the industrially rich Germany, France and England, Marxism reached a backward Russia, in the era when free capitalism reached the stage of monopoly-finance capital due to capital’s inherent character of centralisation and concentration in the hands of a few, which Marx predicted during his lifetime. It was in Russia that VI Lenin – incidentally it’s also the 150th year of his birth – protected, enriched and developed Marxism to a completely new stage, the stage of Leninism, ie, the Marxism of the era of imperialism and proletarian revolution. Yes, it was in Russia, an industrially backward country of peasants that the proletarian class could seize power, albeit 46 years after the Paris Commune of 1871, which was the first state of the working class in the world, and 34 years from Marx’s death.

The experience of Russia not only inspired the west but more than that it aroused the people of the colonial and semi-colonial global south and thereby triggered massive anti-colonial movements. The Chinese revolution under Mao Zedong became an iconic moment of pride for the world’s colonised people, as Marxism-Leninism opened China’s gate towards a prosperous red future, where Marx’s dreams were realised as much as were Lenin’s. Even though the Soviet Union, the state built by Lenin himself, or China, where Mao fought for socialism all his life, changed to their opposites, in words and deeds, and succumbed to capitalism, the spirit of the Marxist ideology and the teachings of these extraordinary Marxists didn’t turn antique. Rather, they have become more relevant as these countries validated the predictions made by Lenin and Mao regarding the recapture of power by deposed capitalists.

Marxism is irrelevant when the theory is divorced from practice and from the class it represents. It can’t be academicised when it should be more proletarianised. The core of Marxism is neither surplus value, nor class struggle, rather, it’s the scientific realisation and forecasting that the capitalist system, as the last stage of a labour-appropriating and exploitation-driven socio-economic order, can’t survive for a long time if the attempt is honestly made to change the world by using class struggle as a weapon. Capitalism isn’t just fallible, it’s destructible as well if one can correctly apply the science of Marxism, as per their peculiar socio-economic condition.

The lack of political weakness exhibited by a bunch of self-styled Marxists and the endless divisions and subdivisions within the left, more over the question of ego than over the question of ideology, can’t be counted as a failure of Marxism or its developed versions by Lenin or Mao. It’s the failure of those who are supposed to carry forward the theoretical work and integrate the theory with the practice of revolution through the class struggle of the poor. Rather than innovating solutions to the problems posed by all-out aggression of monopoly-finance capital, rather than creatively integrating the theory of Marxism with the concrete practice, the so-called academic Marxists are globally bootlegging their spurious theories that aim at one thing – discombobulate the masses. It’s high time that Marx and Marxism must be protected from such dangerous Marxists.