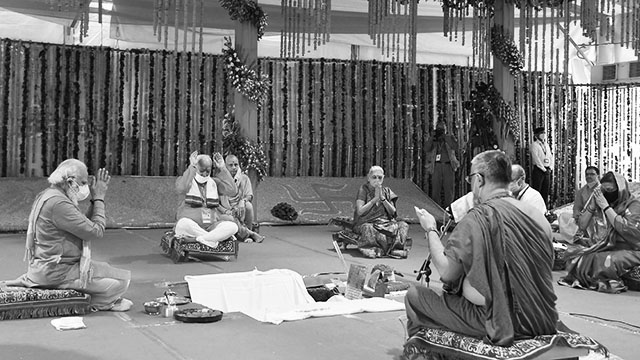 The beginning of the construction of a grand Ram Mandir (temple of Lord Rama, a Hindu deity) in Ayodhya last week, on August 5th, marked the beginning of a new era in Indian polity. Though the focus of both supporters and opponents of the Ram Mandir in Ayodhya, at the site of the now-demolished Babri Masjid, a 15th-century mosque, has been on the optics created by Prime Minister Narendra Modi‘s presence, the actual issue, which indicates a clear victory of the Rashtriya Swayamsevak Sangh (RSS)––the paternal body of the ruling Bharatiya Janata Party (BJP) and fountainhead of global Hindutva fascism––remains absent in the discourse.

While a lot has been said and discussed on the issue of Babri Masjid demolition by an RSS-led feral mob since 1992, and that it’s generally accepted by the opponents of Hindutva fascism that the incident was an act of crime, a waging of war against the secular values enshrined in brighter, yet bleak, words in the Indian constitution, there is a very less discussion regarding the real underlying reasons behind the gargantuan event earmarking the beginning of temple construction, whose foundation stone was laid actually on November 9th 1989.

Modi’s participation in the much-hyped bhumi pujan at the site of the demolished Babri Masjid, where the Indian Supreme Court’s controversial order allowed the construction of a Ram Mandir due to the faith of Hindus, isn’t merely for creation of the optics of Hindu domination in Indian politics, which has been there since the British colonial rulers handed over the power baton to their Indian collaborators in 1947. Rather, it’s a moment of the RSS’s political victory in the Indian polity and the fulfilment of the cause for which it made the BJP a separate party in 1980.

The beginning of the construction of a Ram Mandir at the disputed site, where a 15th-century mosque existed until 1992, and whose demolition the apex court termed as “criminal act”, served a lot of purposes of the RSS and the Modi regime. From diverting the people’s attention from the epidemically blistering COVID-19 pandemic to the mainstreaming of Hindutva fascism as the dominant theme of Indian polity transcending party lines, the grandeur killed many birds with one stone.

One of the best things this bhumi pujan event at Ayodhya did is it exposed the hidden Hindutva fascist self behind the veil of––what the BJP has been calling––pseudo-secularism practised by most of the mainstream political parties. While the Congress party, with its notorious Sikh-genocide manager Kamal Nath, Gandhi-Nehru family scions Rahul Gandhi and Priyanka Gandhi Vadra, and other leaders hailing the Ram Mandir construction, didn’t have to prove anything new, the excitement shown by the likes of Aam Aadmi Party, the Samajwadi Party, etc, exposed how these forces have duped the common people, especially minorities, since years.

Though the Bahujan Samaj Party (BSP), unlike its foe-turned-friend-turned-foe Samajwadi Party or the Congress party, didn’t display its jubilation over the issue, Mayawati’s tweeting made her line clear. The BSP supremo credited the Supreme Court for the Ram Mandir construction, said the party supports the judgement and thanked the court. The chieftain of parliamentary left, the Communist Party of India (Marxist), didn’t remain mum either. In a statement, the CPI (M) criticised the government for taking part in the grandiose and suggested that the trust formed according to the judgement should do its task.

Apparently, through this display of a bile-inducing bonhomie with the BJP and RSS at the moment of the creation of an optics of literal subjugation of the Muslim community and trampling over their constitutional rights by the Hindutva fascist camp to bamboozle the common people to keep them aloof from fighting for their rights and resist the draconian National Population Register that threatens to take away their citizenship, laid threadbare the political hollowness of the Indian mainstream political parties.

Constructing a baroque Ram Mandir as a sign of Brahminical gloating at the plight of the Muslims was never the main agenda of the Hindutva fascists. All they wanted was to make Hindutva the dominant theme in Indian polity so that the focus and discourse revolve around the religion and its appeal, rather than the harsh realities of the economy and the people’s material condition. The RSS has won this game, as of now, with the mainstreaming of Hindutva fascism. It’s to be seen, for how long it can retain this hegemony.