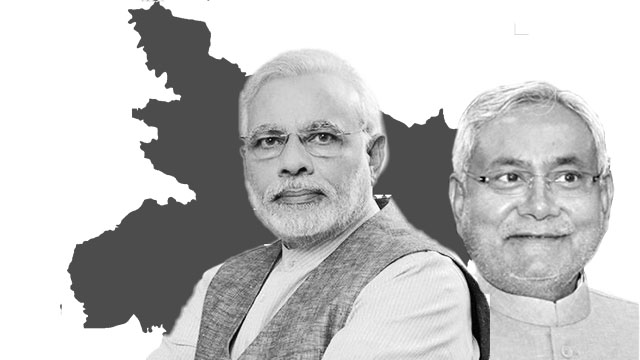 The majority of “migrant workers” who walked for hundreds of miles from big cities––where they worked––to their villages, due to Prime Minister Narendra Modi’s sudden lockdown announcement, belong to Bihar. Their mood may reflect in the Bihar Assembly election as Modi’s Bharatiya Janata Party (BJP) has marginalised its long-term ally, Chief Minister Nitish Kumar-led Janata Dal (United) [JD(U)] and became the omnipotent political entity. This Bihar Assembly election will be between the BJP and the others.

The acrobatic stunt undertaken by Kumar, who returned to the BJP-led National Democratic Alliance (NDA) in July 2017 after a brief tryst with his bête noire Lalu Prasad Yadav-led Rashtriya Janata Dal (RJD) and the Congress party, has downgraded his image from the erstwhile “Susashan Babu” (good administrator) to a political chameleon searching for a warm abode of security.

Thus, his claims of protecting Bihar from Yadav’s “jungle raj” isn’t cutting much ice now. The BJP, driven by its performance in the 2019 Lok Sabha election, is keen to clip Kumar’s wings and render him as a pawn, ventriloquising the Modi regime’s agenda using his eloquence. Yadav is trying to milk this opportunity by bringing close the anti-BJP entities and pulverising Kumar’s “secular” image in the state.

The data of the 2019 Lok Sabha election shows that out of 118 parties that contested the polls, the BJP scored the maximum, ie, 17 seats, with 24.06% votes, while the JD(U) was relegated second position with 16 seats and 22.26% votes. The RJD got no seats despite getting 15.68 votes, while its ally, the Congress party, managed one seat with 7.85% votes. The BJP’s surge as a dominant party and narrative setter in Bihar’s political arena has shown that the JD(U) may be counting its days.

After Lok Janshakti Party (LJP) founder Ram Vilas Paswan’s death, the BJP has got an opportunity to tighten its grip on Chirag Paswan, the late all-weather Union minister’s heir. Paswan Jr recently claimed that he’s an ardent Modi fan to woo the BJP. Paswan Jr had fired salvo against Kumar as he aspires to become a prominent player in Bihar.

Though the LJP won six seats with 8.02% votes in the 2019 Lok Sabha election, much of it was due to the BJP. The party, with the ability to command the allegiance of ostracised Dalits, can be an asset for the Rashtriya Swayamsevak Sangh (RSS), the BJP’s ideological parent, in its “social engineering” operation in rural Bihar to consolidate the rule of upper-caste Hindu feudal landlords.

In the 2015 Bihar Assembly election, the JD(U) won 71 seats in its alliance with the RJD and the Congress party. The RJD won 80 seats, while the Congress won 27, bringing the total tally of the alliance to 178 out of 243 seats. The BJP alone won 53 seats.

This year, the BJP, powered with more zeal and money, aims to sweep more seats and is keen to demote the beleaguered and bankrupt JD(U), which didn’t baulk to be relegated as the BJP and RSS’s vassal. Therefore, the real threat to Kumar’s career isn’t posed by the ailing RJD or the disarrayed Congress party. Even LJP, which keeps threatening him, isn’t a threat. But the BJP poses a serious threat to Kumar’s hegemony.

For the BJP’s aggrandisement, it’s important that as a political entity, the JD(U) is gradually decimated. This will help the BJP to carry out Hindutva fascist propaganda and proselytization in Bihar with utmost impunity. Gradually, Kumar and his JD(U) will be casted in Bihar’s political oblivion. That will make it BJP vs no one in the electoral arena of Bihar.

The Bihar Assembly election 2020 won’t be a game-changer, as it’s difficult to defeat the BJP’s juggernaut through polls. The RSS’s cancerous Hindutva fascist ideology’s roots have penetrated deep inside the society. It’s only the workers’ and peasants’ political struggle against the big corporate capital––both foreign and domestic––and the feudal landlords, who form the core support base of the BJP, that can turn the tide. Bihar needs a reawakening soon to do away with what the ruling BJP has been sowing. For this, the struggle by the poor for political power is quite imperative at this juncture.