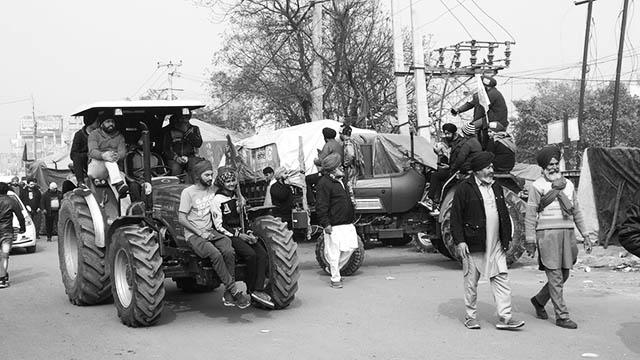 Since 2020, the Republic Day celebrations on January 26th are increasingly becoming optics of ignominy for Indian Prime Minister Narendra Modi’s regime. While over a hundred thousand people assembled and celebrated the 2020 Republic Day at Shaheen Bagh, southeastern Delhi, protesting Modi’s contentious citizenship matrix, in 2021, a large number of farmers plan to take out a tractor march that will show their prowess to the world—while Modi will attend the official celebration at Rajpath—to protest against Modi’s pro-corporate farm reforms. The announcement of farmers’ tractor march on Republic Day against Modi’s farm laws has panicked the government.

The Modi regime has made elaborate security arrangements to prevent the farmers, mostly from Haryana and Punjab, from entering the capital city. More than a million farmers are camping at seven entry points of the capital city, blocking the roads to it. While most of Punjab farmers’ organisation leaders and tractors are camping at the Singhu Border, at Tikri Border, which is 20 km away, many farmers from Haryana and Punjab are growing restless to enter Delhi and occupy its streets to draw the attention of the sclerotic Modi regime. The government has not only remained obstinate in its position to push forward the disastrous farm reforms, but it’s also cracking the whip on the movement to stop the farmers’ tractor march on Republic Day.

During the Supreme Court’s hearing on the contentious farm laws, the government’s counsel complained against the farmers’ tractor march on Republic Day, calling it a handiwork of “anti-national” elements. Recently, the National Investigation Agency (NIA), which is a pawn of Modi’s Bharatiya Janata Party (BJP), summoned farmer leader Baldev Singh Sirsa for questioning over a complaint filed against the outlawed Sikhs For Justice (SFJ). It’s likely that the NIA, infamous for being a Hindutva fascist docile tool, will use the questioning to frame Sirsa and link the farmers’ tractor march on Republic Day with Khalistani separatism. Moreover, since the farmers’ began their journey towards Delhi on November 26th 2020, the BJP and its parental body Rashtriya Swayamsevak Sangh (RSS) have tagged them as Maoists, Khalistanis, Pakistan and China-sponsored, etc, to vilify them and their valour. The RSS even propagated that these protesters aren’t farmers but “middle-men”.

At this juncture, the farmers are quite determined to successfully carry out the tractor march on the Republic Day. The farmers, especially those who are from Punjab, have achieved success in drawing the attention of the global audience to their cause. One of the results of the vigorous campaigning is Canadian Prime Minister Justin Trudeau’s criticism of Modi’s farm laws. Also, many are ascribing the recusing of British Prime Minister Boris Johnson from the chief guest’s role in the Republic Day ceremony apparently to the pressure exerted by the Punjabis in Britain, who have roots in rural Punjab.

The sight of farmers taking a spectacular protest rally against the nonchalant government will further isolate the Modi regime at a time when it’s constantly losing its popularity among the masses, which it gained through vitriolic Islamophobic propaganda and jingoism. While the RSS-BJP would need either a large-scale anti-Muslim pogrom or a border skirmish with neighbouring China or Pakistan to distract the people and titillate them with the saffron version of crooked nationalism, the vigil of the farmers and their refusal to fall in any trap is causing larger and unforeseen problems for the government.

The farmers know that they will lose everything that they have if the government wins in this issue. It’s a factor that has made them resolute and there is no scope of compromise from their end on the core demands of the movement, which include the repealing of the three farm laws and a legal guarantee to minimum support price (MSP) following the Swaminathan Commission’s recommendation. The Modi regime’s arrogance and corporate servility are exhibited in its determination to not heed to the demands of the farmers, which has further agitated the farmers.

If the farmers’ tractor march on Republic Day breaches the barricade, the atmosphere of fear that the Indian ruling classes create around each Republic Day shall be shattered and it will be one of the unique incidents when the Indian farmers, supported by the workers, will take the control of their lives in their own hands. This will be the beginning of a new phase of workers’ and farmers’ struggle against the ruling classes for their rights. Its success is essential for effectively defeating the BJP’s fascist reign.