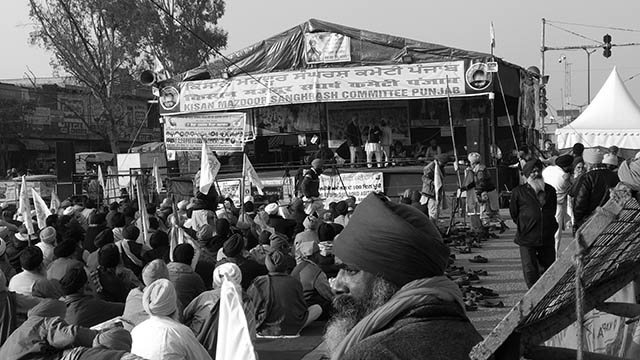 Prime Minister Narendra Modi’s regime has intensified its attack on India’s activists, remnants of independent journalism and common farmers who are participating in the nationwide protest movement demanding the repealing of three contentious farm reform laws passed by it in September 2020. As Bharatiya Janata Party (BJP) faces a strong setback in Haryana, Punjab, Rajasthan and Uttar Pradesh (western parts), the Modi regime is using state violence and persecution to suppress the people’s genuine movement.

It’s not a new thing to see that the Modi regime is involved in the brutal crackdown of people’s movement. Since ascending to power with an absolute majority in 2014, Modi and his BJP have repeatedly revealed utmost fascist modus operandi and their desire to turn India into a theocratic dictatorship of Brahminical upper-caste Hindus. It’s infantile to expect that the Modi regime or the BJP will show a penchant for democratic values and ethics.

While at one point in time, the BJP and its parental body—the Rashtriya Swayamsevak Sangh (RSS)—managed to titillate the majority Hindu community using its Hindutva fascism-laced jingoistic and xenophobic propaganda, targeting the Muslims by using extreme vitriolic campaigning, it couldn’t save its fortress in most places due to the rising tides of the farmers’ movement. The failing economy, rising unemployment and inflation has dilapidated its bastion in most states.

Yet, the Opposition, due to its disarrayed state, can’t resist the BJP’s Hindutva fascist juggernaut effectively as most of these parties are complicit in the same crime that the BJP has committed, either directly or indirectly. The Congress party, which is projected as the principal opponent of the BJP, has never ideologically opposed the RSS’s Hindutva agenda and follows the same neo-liberal economic policy that the BJP subscribes to.

While the Congress party opposes the BJP’s servility towards Gautam Adani’s conglomerate Adani Enterprises, its governments in Rajasthan and Maharashtra connives with the same crony capitalist entity. The Congress party’s hobnobbing with Reliance Industries Ltd, owned by India’s richest man Mukesh Ambani, is well-known as well. One may even recall Mr Ambani asking for votes in favour of the Congress party in the South Mumbai constituency during the 2019 Lok Sabha election. Congress can’t resist the BJP, and the same applies to other allies as well.

The ineffective and fractured Opposition can’t do justice to the people. The Modi regime isn’t surviving the mounting people’s resentment with any magic wand but due to the Opposition’s inability to turn them into massive tides of democratic movements to change the government. The ineffective Opposition has been working as the Modi regime’s fulcrum.

Now, as the assembly elections in Assam, Kerala, Puducherry, Tamil Nadu and West Bengal approach, the BJP will try to utilise this advantage and bulldoze the Opposition in Assam and West Bengal, it’s imperative to develop a real alternative to the BJP at the grassroots, which will combat the Hindutva fascist ideology of the RSS. Without combatting the RSS politically and defeating it at the grassroots, the BJP’s political hegemony can’t be demolished.

At present, when the police state is cracking the whip on civil rights activists, jailing journalists, abusing human rights of farmers, the classical Opposition can’t play its role effectively. Due to their bankrupt ideology, tryst with communalism, utmost corrupt ranks and files, and a questionable credential regarding democratic values and ethos, the existing so-called Opposition can’t become the alternative to the BJP.

The BJP will eventually demolish them either using Modi’s communal demagogy or by playing the jingoism card. But the farmers’ resistance against the agriculture reforms has provided an unprecedented template for those genuinely opposing the Modi regime. It shows that by being outside the influence of the mainstream Opposition, the working class and the farmers can build up a tempo for a total change. Maybe this model can’t be replicated to-to in all parts of the country, but new templates can be built and developed by utilising the learnings from the farmers’ movement, capitalising on the principal contradictions in each region to arouse the masses against the BJP.

By steadfastly sticking to the path of uncompromising resistance to the BJP and the RSS’s Hindutva fascist juggernaut, the democratic and progressive forces can win the victory. But at present, it’s important to form an alternative bloc and provide an alternative model to the people, which can guarantee them political freedom and economic development. The days to come are testing times. The faster a real alternative is built and consolidated, the swifter shall be the BJP’s downfall.