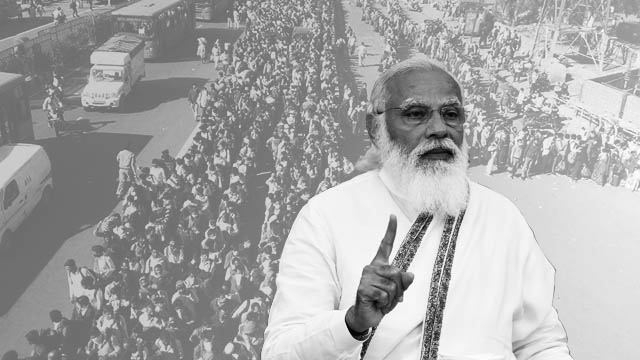 It’s the day! March 24th once again! A year ago, Indian Prime Minister Narendra Modi declared that a nationwide lockdown will be imposed from March 25th 2020 midnight for 14 days to curb COVID-19, which was then declared as a pandemic by the World Health Organization (WHO). A year later, the COVID-19 lockdown’s anniversary haunts the memories of millions and will remain as a negative turning point, as a catalyst of a catastrophe for many more.

Hundreds of thousands of workers, who lost their jobs, had to travel on their foot to their native villages, often hundreds of miles away. Men and women, old and young, the pregnant and the sick, everyone walked for miles, many succumbing on the road, or getting slaughtered on the railway tracks when their tired bodies slept on them, creating the most flabbergasting optics for human memories. Such horrible memories, which often seem surreal, refresh themselves on the COVID-19 lockdown’s anniversary.

Lockdowns in Europe and the US, or, for that matter, in China, had their own stories of sufferings. However, nowhere the lockdowns were as inhuman as in India. Modi and his coterie pejoratively labelled the shrilling wailing of the poor, the working class who are the producers of the society’s material needs, as collateral damage and uttered a few hollow words of sympathy for them. But none of those men and women received any genuine help from the Modi regime or the ruling Bharatiya Janata Party (BJP). The latter was busy lambasting the Muslims for spreading the COVID-19 virus.

The doll, that a child who was killed on the railway tracks in Maharashtra may be carrying, and a few leftover chapatis at the scene mocked the indifference with which “New India”, ie, Modi’s chosen 10% of the super-rich and rich upper-caste Hindus and their lackey urban upper-middle class from the same caste group, treated the predicament of the labouring classes. The COVID-19 lockdown’s anniversary obstinately brings out the skeletons that Modi tries to hide inside his closet.

Today, as we reached the COVID-19 lockdown’s anniversary, it’s the apt time to ask what are the benefits of this inhuman war against the poor people, their lives and livelihoods? How the poor, who were sprayed with chemicals, which the government won’t even use on the cattle, on the street, benefitted from the lockdown? Who is telling their stories?

Today, despite a two-month-long lockdown in 2020, the COVID-19 cases are resurging in India as the country tails only the US in the global race of the virus’s cumulative infections. On March 24th 2020, when Modi declared the lockdown, there were a little over 560 active cases in India. Now, on the COVID-19 lockdown’s anniversary, India has 11.69m cumulative cases, of which 345,377 are active and 160,166 have died. These are those who were diagnosed. In a country like India, one can’t expect to get all cases registered. Let this data ask– what was Modi’s “masterstroke” all about?

The lockdown devastated people’s lives and livelihoods. Many would take another generation to revive their fortunes. India’s economy was already ruined when Modi declared the lockdown, or maybe that ruined condition was the reason the lockdown was announced at the first place. But eventually, the entire economy suffered, and millions went home without a job. Worst of all, the poor children, who were availing primary and secondary education amid hardships, were left with no choices but to quit their studies due to their inability to invest in online education.

When the global pharma giants utilised the fear created by the WHO’s hyper-activism regarding the flu that can’t kill anyone on its own but only when there is comorbidity, they created a “vaccine” market. The fear drove the need for a vaccine and the paranoid, hyper-consumerist global middle-class, including India’s typical upper-caste urban middle-class, became its principal customers.

When the poor were starving to death, when the people were walking hundreds of miles to their homes, the pharma giants made a kill in the stock markets by playing the “vaccine” card. The vaccine is a safe play as it doesn’t guarantee cure from a disease, unlike a medicine, and therefore, it can be sold to governments, who will use public money to buy and initiate vaccination drives, even with 60% effectiveness.

It’s not just the pharma giants. Amid the inhuman lockdown, when millions lost their livelihoods, Mukesh Ambani of the Reliance Industries, the BJP’s principal sponsor, became the sixth richest man on earth, thanks to the Modi regime’s policies that helped him amass immense foreign investment in his JioMart venture, which is all set to become a major retail company. Gautam Adani, another top BJP sponsor, managed to earn the highest wealth in the world in 2020, surpassing even billionaire Elon Musk.

On the COVID-19 lockdown’s anniversary, if we must commemorate something then it’s the state-sponsored killing of hundreds of ‘migrant’ workers, who were forced to undertake an exodus from the cities to the villages and died on the roads. We must commemorate thousands of those who died due to poverty. Those who lost their livelihood, education and the compass of their lives. Extreme poverty to millions, gifted by Modi in the name of saving them from a disease that has spread faster ever since then, helped extreme wealth concentration by a few and that was the sole purpose of the inhuman lockdown.