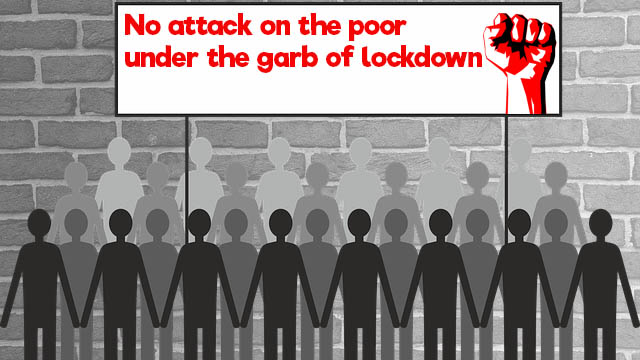 As India suffers asphyxiation due to lack of oxygen amid the grotesque COVID-19 second wave, the poor await bigger devastation. Not only the public healthcare system’s collapse due to Prime Minister Narendra Modi’s deliberate apathy is killing them but also a rigorous second lockdown, imposed arbitrarily by the States, as per the Union’s diktat, is going to destroy them economically, the second time in a row.

Neither Modi is taking the responsibility for the chaotic situation caused due to his regime abdicating its responsibilities nor announcing any effective fiscal stimulus scheme to boost the crumbling economy and to help the working class and the poor to tide over the crisis. Last year, under the garb of the ‘Atmanirbhar Bharat’ plan, Mr Modi only rolled out a liquidity infusion programme. There was a minimal allocation towards fiscal stimulus in the Rs 20-trillion-worth package. This year, even that’s not offered.

In this scenario, most of the so-called ‘left’ and ‘anti-fascist’ forces have started providing the people in need with support. They are running COVID-19 SOS groups on social media, WhatsApp, etc, and providing voluntary services to the sick and the needy. This resembles their actions during the 2020 lockdown when they ran relief programmes to help the migrant workers returning to villages and the poor with food and essential supplies.

Though such Good Samaritan activities may be applauded in galore, they relinquish the state, the ruling clique, from the constitutional responsibility towards the people and their needs at the hour of crisis, especially when a lockdown is imposed, as it’s not a natural disaster but a man-made decision. Such charitable work may look good during natural disasters when even the state’s infrastructure is damaged, but during a lockdown, it’s the responsibility of the government, both Union and state, to compensate the poor for their losses.

Can one allow the Modi regime to recuse itself from the responsibility of providing the poor with food, essentials, a minimum monthly income and health services during the lockdown? Can the so-called ‘left’ and the democratic forces allow the government to sustain the prevalent rule of anarchy? Can the forces representing the working class, the farmers and toiling people allow the government to leave everything on the citizens and evade?

These so-called ‘left’ and ‘anti-fascists’, who aren’t building up mass movements against the Modi regime, its Hindutva fascist enterprise and corporate sponsors, by raising demands for a minimum monthly income for each poor family, especially those who are unorganised sector workers without any fixed income and farmers, nationalisation of healthcare, subsidised government-controlled fair and transparent distribution of oxygen and relaxations for the working class and the poor people during the lockdowns, are ending up as accomplices of the regime. They are providing a breathing space to the government by shielding it from the people’s wrath.

On May 1st 2021—International Labour Day—the Indian mainstream press remained mum on the issue of the labour class, especially the unorganised workers, who are all set to suffer a severe tribulation if the lockdown restrictions are re-imposed with state violence in different parts of India. On International Labour Day, none of the media houses spoke about how the labourers are at loss due to the paranoia of the urban elites and middle-class, who have the option to work from home.

Leave alone the corporate-controlled press, none of the so-called mainstream ‘left’ and ‘anti-fascist’ forces had hit the streets on May Day to raise the essential demands of the working class. The labourers, on whose blood and sweat the official ‘left’ forces build their existential castle, are left to fend for themselves and no one from this camp took any initiative to force the governments, at the Union and state levels, through real movements. Their activities, including a ridiculous demand for Modi’s resignation, remain confined in the social media. This is providing oxygen to the crisis-ridden sclerotic regime.

It’s the task of the representatives of the working class, the farmers and the toiling masses to use the sheer crisis of the ruling classes to strike hard by mobilising the masses against tyranny. The crisis unfolded due to the COVID-19 second wave is an opportunity to amplify the exploited people’s demands. It’s time to force the government to nationalise healthcare, provide subsidy on oxygen, provide minimum monthly income guarantee per family, and food-cum-essentials through public distribution system to the poor, unconditionally. If the so-called ‘left’ can’t do this, then it will earn the ‘right’ label soon for itself.