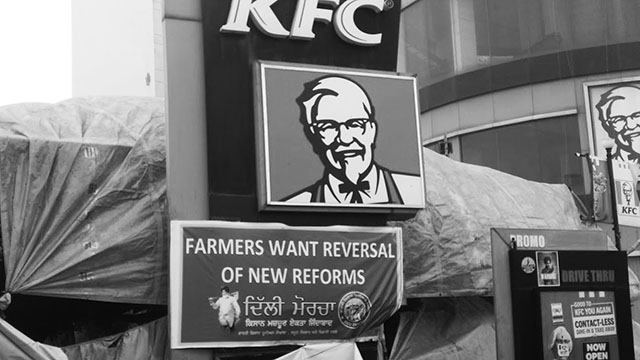 On June 26th 2021, the farmers’ movement against three farm laws passed by Prime Minister Narendra Modi’s government turned seven months and added another feather of achievement to its cap. This movement at Delhi’s three main borders, where farmers from Haryana, Punjab and Uttar Pradesh reached braving police atrocities, was underestimated from day one by Modi and his ruling Bharatiya Janata Party (BJP). Now as the farmers made a world record in sustaining one of the longest-running sit-in demonstrations, which has been largely peaceful, the Modi regime is running out of ammunition to fight it.

On June 26th, thousands of farmers from Haryana and Punjab rallied, especially in Chandigarh, to highlight their demand and indomitable spirit. In different states, the farmers submitted memorandums to President Ram Nath Kovind, through state governors, opposing the three farm laws that threaten not only the farmers’ livelihood but also India’s food security.

In Kolkata, Indian Secular Front (ISF) legislator Md Nawshad Siddiqui was arrested by the police under the Disaster Management Act, 2005, when he tried to demonstrate peacefully in favour of the farmers at the pedestal of MK Gandhi’s statue at Mayo Road. This act exposed Chief Minister Mamata Bandopadhyay’s hypocrisy on the question of the farm laws. As she allowed her police to arrest an elected representative of the people agitating against the same laws she claims to oppose, it showed her desperation to curtail the Opposition’s right to fight democratically against the BJP in the state.

Seeing the farmers’ movement against three farm laws complete seven months, the BJP is in deep trouble. Moreover, iconic farmer leader and Bharatiya Kisan Union (BKU) head Rakesh Tikait said that he will ensure that the BJP is defeated in the forthcoming Uttar Pradesh Assembly elections. Earlier, Tikait and other BKU factions participated in the “No Vote to BJP” campaign in West Bengal and that stopped the BJP’s juggernaut in the recent assembly polls. If a similar exercise is undertaken by the BKU even in western Uttar Pradesh, then the BJP will be in an abysmal crisis as it was the new Hindutva laboratory.

Even Punjab, the epicentre of the farmers’ movement against three farm laws, will go to the polls in 2022. The BJP has lost its oldest ally, the Akali Dal, which helped it rule the state from 2012 onwards, due to its shameless vouching for the farm laws. Still, accepting the risk, posed by the pro-corporate farm reform laws of the Modi regime, the BJP is trying to traverse through the treacherous terrain by antagonising the farmers.

Can the BJP win against the farmers’ movement against three farm laws? Can the big corporate sponsors of the Modi regime defeat the farmers’ perseverance? Or will the farmers of India, who are reeling under the neoliberal economy’s juggernaut, deliver the final verdict and seal the fate of Modi’s sclerotic regime? To know that one needs to wait for a few more months. The zeal with which the farmers are consistently sustaining their historic movement shall pay richer dividends to them. It will also mean the total decimation of the Hindutva fascist forces at the grassroots of northern Indian villages. This template must be followed by the farmers of the other parts of India to maximise the effects of their blows on the BJP and the pro-corporate Modi regime.