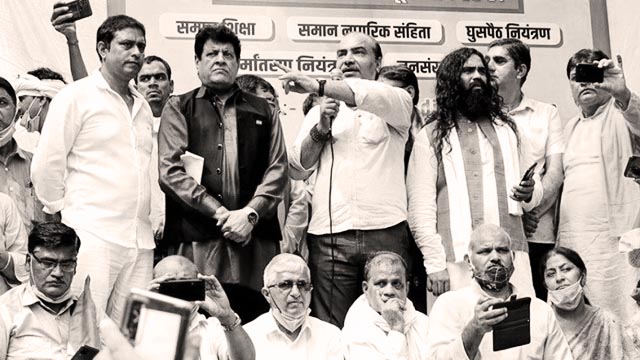 The Rashtriya Swayamsevak Sangh (RSS), the BJP’s parent body, seems eager to stoke communal violence in north India to titillate hardcore Hindutva supporters. As the farmers’ movement against Prime Minister Narendra Modi’s three anti-farmer laws has been growing phenomenally since the last eight months, the BJP-RSS are finding their carefully manufactured communal polarisation scheme in western Uttar Pradesh doomed. The renewed communal unity, fuelled by the farmers’ rage against the Modi regime and the BJP, drove Hindutva fascists out of several villages in Haryana, Punjab and western Uttar Pradesh.

Amid this, the farmers, who have been demonstrating at the borders of Delhi for the last eight months, have sent a contingent of representatives to organise a parallel farmers’ parliament or “Kisan Sansad” at Jantar Mantar. Two days before the infamous Hindutva rally at Jantar Mantar, parliamentarians belonging to 14 opposition parties reached the venue of the Kisan Sansad to show solidarity. Following that, the Opposition has been raising the issue of repealing the farm laws in the Parliament as well. Due to this, organising a counter-rally in Jantar Mantar became imperative for the RSS-BJP.

Though the Delhi Police’s Parliament Street Police Station is located a few hundred metres from the site where Upadhyay and Chouhan organised the rally without seeking the mandatory police permission, unsurprisingly, the men in uniform remained mute spectators and enjoyed the show of Islamophobic vitriol. Thanks to Modi’s right-hand man Amit Shah, the Union home minister to whom the Delhi Police reports, no cognisance of the offence was taken until the National Commission for Women (NCW) wrote a letter to the police. Even the first information report (FIR) was lodged against “unknown people”.

Later, the Delhi Police detained Upadhyay and four other Hindutva fascists, though they are not arrested, and no formal charges are levelled against them. Controversial police officer Rakesh Asthana’s ascension as the Delhi Police’s commissioner has ensured that before the Uttar Pradesh Assembly elections, the Delhi Police can function as the BJP’s stooge with absolute impunity.

Following Sunday’s high-voltage hatemongering under the leadership of the BJP leaders, the capital’s Muslims, who suffered macabre atrocities during the 2020 Delhi anti-Muslim pogrom, have been living under perpetual fear of majoritarian violence. As a socio-economically marginalised community and ghettoised due to Brahminical discrimination for ages, the city’s Muslims can see signs of an approaching catastrophe for them. The Union government and the city’s government led by Chief Minister Arvind Kejriwal didn’t provide them with any assurance of safety and security.

In this scenario, the centrist liberals have been asking the Muslims to visit Jantar Mantar and oppose the call to violence by Upadhyay’s men. However, that will not serve the purpose. The Muslims didn’t organise a rally to demand a Shariat-based Islamist theocratic state, they didn’t bay for the blood of any other community. Rather than mobilising the Muslims, who mostly oppose the BJP-RSS, it’s the responsibility of the majority community’s leaders to mobilise the Hindus against the Hindutva fascist thugs. Only this can crack the BJP-RSS’s pot and help to weaken the Hindutva omnipotence.

The Muslims are India’s declared “other” and these open calls for genocide shows the fragility of the much-hyped Indian “secularism” that the liberals swear by. There is no way, under the Modi regime, that the Muslims will get their due respect and will be treated as equal citizens in India. There will be far bigger communal troubles on the way, especially with the Uttar Pradesh polls around the corner and history shows that the police and the administration will only act against the minority community and hound its members, rather than Hindutva thugs.

For the sake of secularism, it’s the Hindus, especially the backward classes and the ostracised Dalits, who must come out and build up a massive movement against the Hindutva fascists. Unless Hindutva fascism is delegitimised by the north Indian Hindus, whom the BJP tries to woo with its baits, the Muslims won’t be safe. Upadhyay and Chouhan, along with their men, won’t be behind the bars for long. The RSS won’t sit idle either. Time is a luxury; the farmers’ experience must be used to thwart Hindutva immediately.