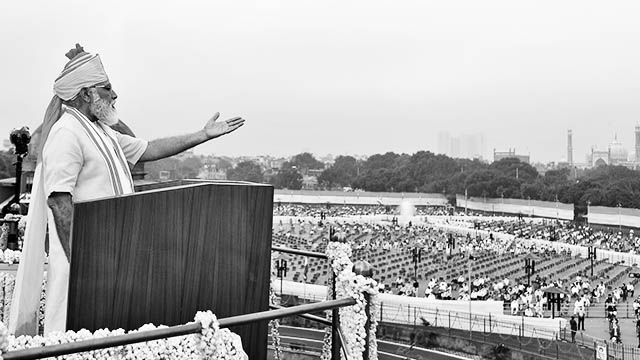 The 75th Independence Day is around the corner and New Delhi’s iconic Red Fort is experiencing an unprecedented security build-up, which far surpasses hitherto exhibited quintessential hysteria around the occasion by the Indian state. Before Prime Minister Narendra Modi’s annual flag hoisting and rhetoric mongering from the fort’s podium on August 15th 2021, a large number of shipping containers are heaped at its entrance to barricade the area. What’s driving Modi’s Bharatiya Janata Party (BJP) to display such a high degree of paranoia?

On January 26th 2021, on the occasion of India’s 72nd Republic Day, farmers protesting Modi’s three pro-corporate agriculture laws organised a tractor’s march to highlight their plight. Though their march was peaceful and tried to enter the heart of New Delhi to ensure that the government stop treating them with negligence, the Delhi Police under the BJP’s order unleashed macabre atrocities against them. The clashes between the farmers and the police turned Delhi into a war zone and finally, by the afternoon, the farmers managed to capture the iconic Red Fort and hoist the Sikh religion’s sacred banner, the Nishan Sahib on top of it.

The farmers’ heroic resistance against state atrocities and them hoisting the Nishan Sahib as a symbol of their victory against the brutality, terrorised the BJP and the Modi regime. This made them accuse the Sikh farmers of being Khalistani separatists. The state unleashed violence against the farmers and tried hard to evict them from the borders of Delhi. However, no such attempts could succeed due to the perseverance shown by the farmers as they continue their movement, uninterrupted, for eight months.

As the farmers have sent their delegation to Jantar Mantar and organised a parallel Kisan Sansad (farmers’ parliament) to oppose the Modi regime’s anti-farmer policies, and as the Opposition reached out to the farmers to express solidarity without participating in their movement, the BJP is frightened that the farmers may attempt to encircle the prime minister on August 15th, when he will visit the Red Fort. This is the reason that these huge shipping containers are used by the security agencies to barricade the Red Fort.

During the Republic Day celebration, the prime minister and other statesmen attend the military parade at Rajpath that connects the president’s palace with the India Gate, which kept Modi aloof from the farmers who rushed to Red Fort from three borders to lodge their protest. The eight-month-long movement and its indomitable spirit are unmatched in the history of India’s anti-government protests. The BJP, which once underestimated the farmers’ potential, is now worried about the challenge their movement throws at its hegemony and how it breaches the hallo of invincibility built around Modi.

Can the shipping containers frighten the farmers who are fighting an unequal battle and are ready to die rather than capitulating to the government’s muscle-flexing? If the BJP thinks that such barriers can immunise the Modi regime from the wrath of the people, then it’s residing in fool’s paradise. Even after more than 350 farmers losing their lives at the protest sites, the agitating farmers didn’t turn weak or plead with the government. Rather, they have shown how peaceful and democratic struggles can also cause insecurities in the power corridors of New Delhi.

While the Indian elites and urban middle-class celebrates Independence Day annually with cliché “patriotic music”, films and social media posts, the Indian government under Modi’s government continues to curb “freedom” or whatever was left of it for the majority of the people. Chanting the “Azadi” (freedom) slogan is now considered illegal in India and even the usage of the term can provide an opportunity to the state to book anyone under colonial sedition law. In the last seven years, the Modi regime has jailed numerous activists, journalists, students and opponents on sedition charges, whenever they tried to oppose the government.

At a time, when the opponents of the government are branded as “anti-nationals” and using “Azadi” as a political slogan can bring the state’s wrath, it’s normal that the unpopular and anti-people government, which is selling India, piecemeal, to big corporates, will erect barriers to thwart a people’s struggle for real freedom and democracy. The 75th Independence Day celebration is the best exhibition of how fake the “freedom” the ruling classes cherish is for the common people. However, as the country lacks a strong Opposition that can fight fascism effectively, there seems no quick rescue for the people reeling under the BJP’s juggernaut.