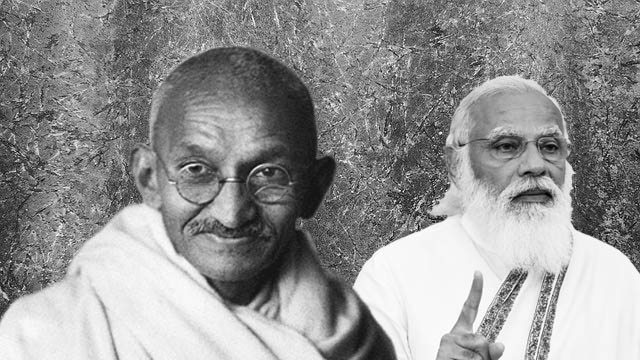 For years, to woo foreign capital, the Indian rulers have marketed the country as the haven of ‘nonviolence’ by using the image of Mohandas Gandhi, whose ideology sells like hotcake in the west. However, at the same time, Indian rulers have promoted militarist machoism as the epitome of ‘nationalism’ in India. The rise of militant Hindu nationalism under Prime Minister Narendra Modi’s ultra-right Bharatiya Janata Party (BJP) isn’t a deviation during India’s 71-year-long democracy, rather its inevitable outcome. The rise in violence against the farmers and marginalised minorities in India show the grotesque face of the monster.

In recent weeks, while the world, especially the western media, focused on magnifying the Taliban’s alleged atrocities in Afghanistan, India has experienced a new lease of violence, both by Hindutva fascism-incensed vigilante mobs and by the state machinery against the Muslims and the farmers. From a hapless Muslim bangle seller in Indore, in the BJP-ruled Madhya Pradesh to the attack on Muslim dosa and biryani sellers in Uttar Pradesh, from police atrocities on farmers in BJP-ruled Haryana to arrest of Muslim activists protesting atrocities against the community in Madhya Pradesh, the list continues to grow.

After the video, which showed a feral Hindutva fascist mob thrashing a poor Muslim bangle seller for daring to sell his stuff to Hindu women, went viral, the Madhya Pradesh government under the BJP levelled charges against the victim to ensure the upper-caste Hindu perpetrators remain aloof from the law. This is done according to the template that the BJP has been following in different states that it rules. Even when a group of Hindutva fascists raised genocidal slogans, calling for the massacre of Muslims, at the heart of capital New Delhi, no stringent action was taken against the culprits, rather the top-most accused managed to secure bail within a few days of his arrest.

This is at a time when critics of the Modi regime and the BJP continue to languish behind the bars on false charges. Muslim activists, who came out to protest the Hindutva fascist attack on the poor bangle seller in Indore, were also arrested and the Madhya Pradesh home minister accused one of them of having a “Pakistan connection” without elaborating what does that mean. For three years, several activists, lawyers and writers have been imprisoned under the infamous Elgar Parishad case related to the Bhima Koregaon violence during a Dalit rally on January 1st 2018.

A social activist, Father Stan Swamy, who was accused in the case, was killed due to the state’s apathy in custody. Many journalists face state repression for simply doing their job. The BJP leaders and their boisterous internet troll army call for the death of anyone who dares to criticise the government. The BJP even didn’t spare the students who opposed its discriminatory and bigoted policies. The Kashmiri people’s voices are silenced using the muzzle of New Delhi’s assault rifles.

Since Modi’s ascension to power in 2014, riding on the popularity he gained due to his complicity in the 2002 Gujarat anti-Muslim pogrom, the incidents of violence against the Muslims increased manifold in India and got unapologetic state sponsorship. The Modi regime and the BJP didn’t even spare the farmers of northern India when they came out to oppose Modi’s pro-corporate farm laws. The farmers repeatedly faced state violence for protesting.

This rise in violence against the farmers and marginalised minorities in India didn’t bother the western world. Except for a few mellowed notes of criticism, the west remained nonchalant regarding India and remained focused on countries that oppose the US’s hegemonic quest. A market-friendly India, even under the sclerotic Hindutva fascist regime with an obnoxious apartheid agenda, isn’t bad for the west. What’s worse is when a country denies the west unrestricted access to its resources and market. Under Modi’s BJP, the western big monopoly-finance capital has unrestricted access to India’s market, resources and labour.

Gandhism is India’s PR tool while the government has no penchant for nonviolence. Under Modi and his Hindutva fascist coterie, the marginalised will be gagged severely. The rise in violence against the farmers and marginalised minorities in India will continue unabated as the global community will abet it and work as its apologists rather than taking affirmative actions to stop human rights violations in India. The Muslim bangle seller in Madhya Pradesh and the farmers killed and injured by the BJP’s government in Haryana will remain in oblivion as the market forces will laud Indian Gandhian democracy’s worth.