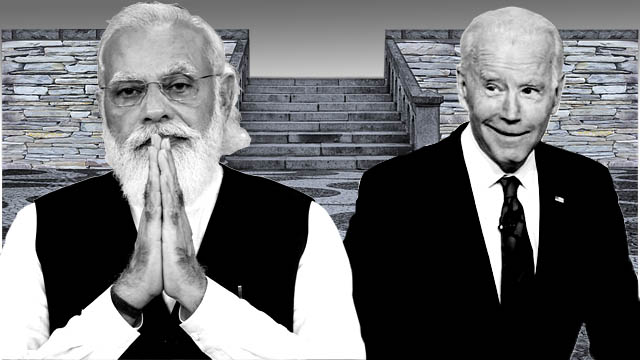 Prime Minister Narendra Modi’s first visit to the US after Joe Biden took charge became remarkable in two aspects. On the one hand, it showed how India remains an important pawn for the US against China in its new “Indo-Pacific” war theatre and, also, how Washington DC uses the issue of “human rights” violations solely based on its geopolitical interests. Modi’s meeting with Biden and Vice-President Kamala Harris showed how the Indian premier is enjoying a bonhomie with the new administration even after openly campaigning in favour of former president Donald Trump during his last tour in 2019.

The entire US-India bilateral relationship is now based on India’s partnership with Washington DC and its allies in containing China militarily. India has been a crucial partner in the American military pursuit in Asia-Pacific and that’s why New Delhi has been continuously stressing its role as an anti-China crusader in the “Indo-Pacific”, albeit with caution taking into consideration the unreliable character of the US, which is infamous for dumping “allies” at crucial hours. This is a reason that the India-US bilateral trade pact didn’t move ahead an inch, while their military cooperation in the so-called “Indo-Pacific” grows daily.

While the US considers itself the self-appointed guardian of the world and takes a potshot at its global opponents, accusing them of violating human rights, promoting dictatorship, etc, it keeps its eyes shut to the ghastly crimes against humanity, the utmost sclerotic tyranny unleashed by the American allies. This is a reason why the US remains indifferent to the human rights violations, trampling of the minority rights, censorship of the press, etc, in India under Modi. Therefore, neither Biden nor Harris spoke of the injustice meted out to the Indian poor, the marginalised and the minorities by Modi’s Bharatiya Janata Party (BJP)-led administration.

Only a few days ago, visuals from the Indian state of Assam, which is ruled by Modi’s BJP, showed the world how the minority Muslims and internally-displaced people (IDPs) are persecuted. Two, including an 11-year-old, was brutally killed by the state machinery while forcefully evicting people from a large tract of land where the BJP wants to roll out a corporate-controlled farming project. The visuals of how the policemen shot one protester—Moinul Haque—who was armed with a stick, how the policemen rained batons on him and an enraged photographer, hired by the state, stomping and punching him seconds before his death, quivered the conscience of those who still have it.

However, Mr Biden and Ms Harris, who coupled as champions of ‘libertarian’ values during the elections, remain indifferent to the plight of India’s fall into the abyss of totalitarian rule under their protégé Modi and his Hindutva fascist camp. While Modi’s bonhomie with Trump didn’t go down well with the Democrats, the reason Biden and Harris won’t speak against Modi is his ‘market-friendly’ image. Modi is opening all sectors of the Indian economy, especially access to its mineral resources, cheap labour and a vast market to the US and its western allies. Moreover, India is working as a military outpost of the US and serving Washington DC’s geopolitical interests in South Asia and the “Indo-Pacific”.

Due to this, the brutal killing of Muslims, jailing of rights activists and opponents, the censorship imposed on the press, etc, in India, aren’t noticed by the US. Unlike Russia and China, the US has no obstructions in exploiting the resources, labour and markets of India and, hence, it won’t criticise it for the crimes against humanity.

Farmers, who have been protesting Modi’s anti-farmer agriculture reforms for the last ten months at New Delhi’s borders are appealing Biden to take up their plight with Modi. However, the farmers have not realised that it’s for the sake of the US and its western allies that Modi has introduced his anti-farmer laws. It’s for the interest of the big American and European corporations, along with their Indian comprador lackeys like Mukesh Ambani and Gautam Adani, that the Modi regime has brought the controversial laws.

So, as the western world—usually vocal about human rights— will keep its eyes shut to India’s crimes against humanity, from Kashmir, Uttar Pradesh to Assam, as Modi is “market-friendly” fascist, it’s the working-class and the farmers who have to fight the fascist rule on their own. Their self-reliance model will be different from Modi’s “Aatmanirbhar Bharat” scheme and can become a lethal force for the Hindutva fascist tyranny if it perseveres in its pursuit and resists the neoliberal economic model consistently.