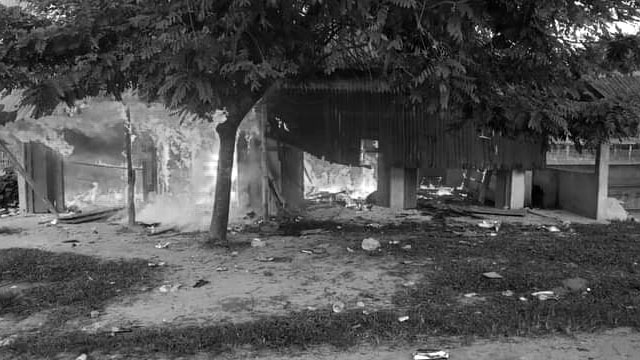 Tripura violence is a topic that’s cannibalised in the Indian mainstream press by the hullaballoo over the alleged drug abuse by Hindi film actor Shahrukh Khan’s son Aryan Khan, his arrest, an expensive legal battle and a bail order. The hyper-reactive urban elites and middle-class, who belong to upper-caste Hindu society, are quite happy to discuss the case and its dramatic twists, but none would care a lemon about Tripura, where the Muslim community is facing an institutionalised pogrom.

More than a week has passed, apart from the meek response from the mainstream political parties on Tripura violence, no major upheaval has been visible. Except for a few Muslim organisations and student organisations holding a protest at Delhi’s Tripura House, no political movement has taken place against the Hindutva fascist assault on the Muslims of Tripura. None of the political parties, including the self-styled left Communist Party of India (Marxist) [CPI(M)]-led Left Front, which ruled Tripura for over 25 years, have mobilised their supporters or their organisations to combat the communal menace.

As 9.2% of the total population of Tripura, the minority Muslims are simply politically expendable for the parliamentary parties and none of them, including the Trinamool Congress (TMC), which is trying to occupy the principal opposition party’s status in the northeastern state by marginalising the left, could muster the courage to strongly oppose the Hindutva fascism-led Tripura violence. They did not want to irk the consolidated “Hindu” vote bank in the state.

The façade of secularism that these political parties wear to hoodwink the masses, and to dupe the minorities and marginalised people during elections, has fallen off, once more, following the Tripura violence against the minority Muslims. Their deafening and conspicuous silence not only bolstered the ruling Bharatiya Janata Party (BJP) and its parent body Rashtriya Swayamsevak Sangh (RSS) to continue the rioting spree in Tripura but also exposed how these “secular” parties are hand-in-gloves with these rioters.

The BJP-ruled state had no history of Hindu-Muslim dichotomy or violence in the past. Earlier, the antagonism between the Hindu Bengali refugees from neighbouring Bangladesh and the indigenous tribal people flared conflagration in the state. However, with the RSS-led communal polarisation drive, which created a consolidated “Hindu” vote bank transcending caste and class identities, the Bengali Hindus are now mobilised en masse against the largely Bengali-speaking Muslims.

Moreover, the leadership of these Hindutva fascist mobs are in the hands of the Hindi-speaking, upper-caste Hindus from northern parts of India, whose settlement colonies in Tripura have expanded manifold. Interestingly, a section of Chakma tribal refugees from Bangladesh have also joined hands with the Hindutva fascists against the Bengali-speaking Muslims.

A new equation is formed by the Hindutva camp to farther its goal of consolidating a support base and helping the BJP win the 2023 elections in the state, riding on the Hindu polarisation. The so-called “secular” outfits like the CPI(M), the TMC and the grand old Congress party are trying to woo this largely Hindu vote bank to seize power in Tripura and, hence, they are avoiding taking any proactive stand on resisting the aggression on the Muslims.

More than 21 incidents of violence have taken place in Tripura. Panisagar experienced the worst in the current phase of Tripura violence. The mosques are vandalised, Muslim homes are ransacked, Muslim men are injured and the women have been threatened with sexual violence. Yet, nowhere in India, these gory atrocities are creating any furore.

While anti-Hindu violence in Bangladesh caused many so-called “seculars” and liberals to come out and protest, the Tripura violence against the Muslim community has sealed their lips and conscience. This shows the reality of India and its so-called Opposition. Except for their votes, which the so-called “secular” parties take for granted, there is no value for the Muslims in their land.

The RSS and the BJP are doing what they are supposed to do– promote communal carnages. But the betrayal of the secular bloc and the total obfuscation of the Tripura violence against Muslims by the mainstream press proved once more that the parliamentary politicians of all shades, orientation and ideological schools, along with the mainstream press with diverse editorial tonality, are servile agents of the Brahminical order and won’t ever stand up against it or stand in solidarity with the persecuted and repressed people. When it comes to Muslims, they will show solidarity with the rich man’s son Aryan Khan only.