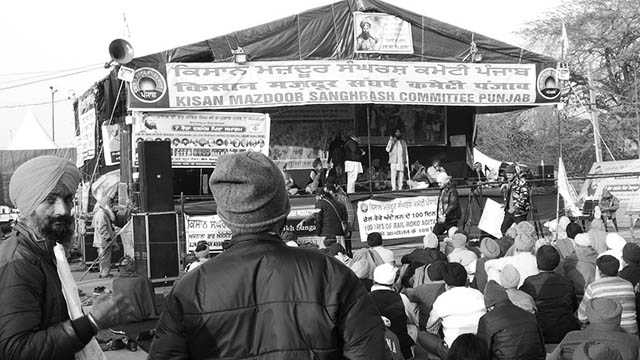 The Indian farmers’ sit-in protest movement against Prime Minister Narendra Modi’s contentious farm laws at capital New Delhi’s borders completed one year today. With this, it became one of the longest-running and most successful mass movements of post-colonial India, which isn’t led by any mainstream political party. This is a historical milestone set by the agrarian community that refused to bow before the might of the Indian state.

While the mainstream Opposition and several intellectuals, who have supported the movement conditionally, entered a jubilation spree after Modi announced on November 19th 2021 that his government will repeal the three controversial farm laws during the forthcoming winter session of the Parliament, the farmers have been cautious in their response.

Rather than showing an iota of faith in Modi’s promise, they have called on to intensify their movement to ensure that the government doesn’t get a chance to become selective in accepting the demands put forward by the farmers. They have asserted that their movement will continue until all their demands are met.

The farmers have been demanding the unconditional repealing of the three farm laws, the enactment of a new law to guarantee minimum support price (MSP) for crops, withdrawal of false criminal cases against protestors and compensation for all victims killed during the movement.

While the government held 11 rounds of talks with the farmers, during which both sides remained obstinate on their positions, Modi’s announcement came as a unilateral decision. He didn’t consult the farmers before declaring that the government will be repealing the laws due to their opposition.

Rather, Modi retained his hubris and informed that the government is retreating only because the farmers “didn’t understand the benefits” of these reforms. The farmers saw this as a tactic, which is used to defuse tension and wean away the lost support base of Modi’s ruling Bharatiya Janata Party (BJP). They have decided to wait and intensify their protest movement until the laws are repealed and their other demands are officially met.

Earlier, the Modi regime had postponed the implementation of the three laws for 18 months. The repealing of the laws will not culminate the threat of corporate aggression on agriculture at all. Without a legal guarantee of MSP for crops, the farmers can’t even survive as they can’t even recover their input costs. But the Modi regime is trying to push this issue to oblivion and focussing only on the repealing of the three laws.

The BJP ardently needs the farmers by its side, at least in poll-bound Uttar Pradesh. As the ongoing agitation has bridged the communal fissure created by the BJP and its parent body Rashtriya Swayamsevak Sangh (RSS), the quintessential communal template has not been working for the saffron camp. This has compelled Modi to take a step towards repealing the acts so that the movement can be stalled until the elections are over.

It will be easier for the BJP to introduce the farm laws in different avatars at the State level as agriculture is a state subject. Therefore, if the several BJP-ruled States bring similar legislations, then the farmers’ struggle can be easily divided into smaller movements, which will act within those States and won’t assume an all-India character, threatening the hegemony of Modi.

With this intent and to ensure that his government’s international standing isn’t impacted due to the ongoing farmers’ movement, the Modi regime has decided to repeal these laws. But the farmers couldn’t be fooled. They have intensified their movement to ensure that the government accepts their other demands as well.

The Modi regime has killed around 670 farmers in the last year. Some through apathy and some through the BJP’s goons, like the son of Union Minister of State for Home Affairs Ajay Mishra “Teni” who massacred farmers in Lakhimpur Kheri of eastern Uttar Pradesh recently. There can’t be an end to the movement until the victims receive justice and their families receive adequate compensation.

As the farmers’ sit-in protest movement at Delhi’s border celebrates its first anniversary today, it leaves an impressive trail mark for other movements to follow. How long can the BJP survive the farmers’ movement? Modi’s partial retreat—even though tactical—certainly added a fillip to the farmers’ morale. As the farmers’ movement intensifies and defeats the government’s obnoxious agendas, one by one, soon, the wait will be for the BJP’s Armageddon at its strong turf in northern India. The farmers are surely the harbingers of change. Their yield is rich and promising for democracy.