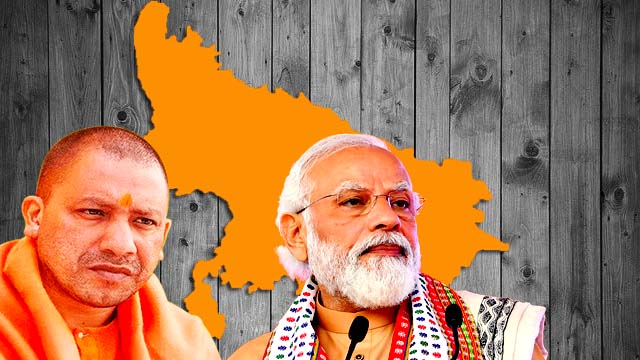 The Uttar Pradesh Assembly elections have always been a centre of attraction for journalists, political pundits and the news consumers of India, as the old proverb says that the road to the throne in New Delhi is through Lucknow. The 2022 Uttar Pradesh Assembly elections are quite interesting for the observers for several reasons, the most important of them is Prime Minister Narendra Modi’s political future.

The fortunes of Modi and incumbent Chief Minister Yogi Adityanath are intrinsically connected with the state polls. If the ruling Bharatiya Janata Party (BJP) can’t retain Uttar Pradesh, then it will be a major setback for the entire Hindutva fascist universe led by the Rashtriya Swayamsevak Sangh (RSS), which has turned the northern province into a laboratory of bigotry and state-sponsored militancy. It will also be an ignominy for Modi, who happens to be a member of the Parliament from Varanasi.

Though the political vitals of the BJP are stronger in Uttar Pradesh, thanks to a gigantic organisation, the backup provided by a plethora of armed militia of the RSS-led Hindutva fascists, and a firebrand rabble-rouser like Yogi at the helm, however, the Party is still suffering due to severe internal and external crisis caused by its policies and the people’s disenchantment with the monk-turned-chief minister.

For the onlookers, who will get the absolute majority in the 2022 Uttar Pradesh Assembly elections is a crucial question. The answer could’ve been the BJP until early 2020 when the saffron camp was deriving mileage from the Muslims protesting Modi’s citizenship matrix, which helped the Party to polarise a paranoid Hindu vote bank infected by Hindutva-incensed Islamophobia. But the situation didn’t remain favourable for the BJP for long.

The inhumane lockdown by the Modi regime, the constant police atrocities on the poor people under the garb of enforcing Covid-19 restrictions, the unbridled rapes and murders of the ostracised Dalits and the members of the other backward classes (OBCs), especially the grotesque Unnao and Hathras incidents, and the massive farmers’ movement against Modi’s pro-corporate farm reforms jolted the BJP’s political prospects throughout Uttar Pradesh, especially in the rural areas.

In the May 2021 Panchayat elections, rural Uttar Pradesh saw a massive people’s outburst against the BJP, which forced Yogi’s men to unapologetically rig the elections to the mid and higher tiers of the Panchayat system using sheer violence. Though the terror unleashed by the BJP helped it sweep other rounds of the election and save its face, the people’s resentment couldn’t be subjugated.

The continuation of the farmers’ movement until the government accepted the demands in writing proved a major setback for the Yogi regime in Uttar Pradesh. The farmers of western Uttar Pradesh, mostly Jat farmers who were lured into the Hindutva fascist fold by the RSS in 2013, using the Muzaffarnagar anti-Muslim pogrom, have been at the forefront of the farmers’ movement against Modi’s farm reforms.

Now, realising how the BJP has cheated them for years using religion as a weapon, the Jat farmers have been opposing the BJP and Yogi vehemently. In eastern Uttar Pradesh, though the BJP retains a tight grip over the urban and semi-urban Hindu voters, the BJP is facing anti-incumbency waves in the rural areas. The brutal massacre of four farmers in Lakhimpur Kheri in October 2021, allegedly by the son of a BJP leader-cum-deputy minister in Modi’s cabinet, stirred people’s outrage.

Apart from the Muslims, other minorities like the Buddhists, the Christians and the Sikhs have been irked by Yogi’s sclerotic rule as well. Moreover, the Dalits, the OBCs and the tribal people, who have faced the heat under Yogi’s unapologetic Brahminical supremacist rule, are now manifesting their frustration with Modi and the BJP’s habit of using these people as pawns against the Muslims during communal pogroms.

The anger within these communities triggered an exodus of turncoat leaders from the BJP. Sensing the growing discontent among the Dalits and OBCs, several Uttar Pradesh ministers and members of the legislative assembly (MLAs) have quit the BJP recently and are joining hands with the Samajwadi Party. Most of these politicians had joined the BJP in 2016-17 and are now quitting the ranks after enjoying the cake for five years.

Can the BJP win the 2022 Uttar Pradesh Assembly elections using its time-tested communal template? Can the Opposition manage to topple the Yogi regime and undo the damages done by it? All these will be known in March when the results will be out. Until then it’s to be seen whether the Opposition can hammer the nail at the right spots by utilising the BJP’s acute crisis–within the Party ranks and outside.