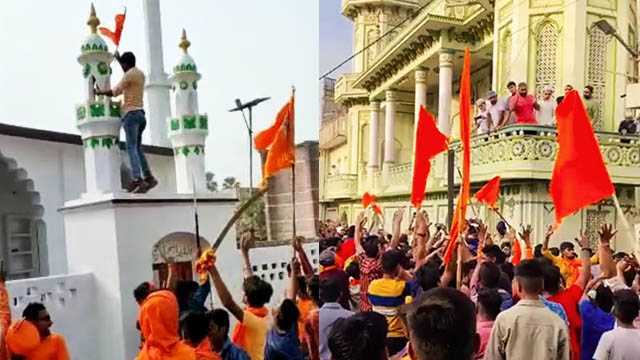 The North Indian Hindu festival Ram Navami returned after the COVID-19 restrictions prevented gatherings for the last two years. However, the occasion was used by the rabid Hindutva fascist forces to target the Muslim localities and places of worship. Bihar, Goa, Gujarat, Jharkhand, Madhya Pradesh and West Bengal experienced a surge in anti-Muslim violence during Ram Navami celebration.

The trend of rallying to Muslim localities while brandishing swords and hoisting the saffron flag of the Rashtriya Swayamsevak Sangh (RSS)—the parent body of India’s ruling Bharatiya Janata Party (BJP)—atop mosques raises questions regarding the real motive behind Ram Navami celebration. Rather than religious rallies, these have turned out to be occasions to assert Hindu hegemony by the BJP-aided feral armed men on the streets.

Are these rallies religious? If they are religious rallies, why do they need to brandish swords, play anti-Muslim lewd songs, raise abusive slogans and threaten Muslims in the Muslim localities? Also, what role does a mosque play in the Hindu religion that Ram Navami rallies always reach one of the mosques in its route where the saffron banners are unfurled?

It’s needless to mention that the Muslims have suffered due to the violence during Ram Navami rallies. Even in states ruled by the BJP’s opponents like Trinamool Congress (TMC)-ruled West Bengal, the Ram Navami rallies targeted mosques and Muslim localities, especially in Bankura’s Machantala and Howrah’s Shibpur. At the same time, the feral mob raised anti-Muslim slogans in the presence of the police and administrative officials, who remained meek spectators.

The same administration didn’t spare the Muslim youth who resisted Hindutva fascist attacks on their mosques, houses and shops. After suffering loot, arson and violence, the Muslims found their homes demolished by the police in Gujarat and Madhya Pradesh because they were accused of “stone-pelting”. Yet real perpetrators of fuelling communal tension and hate speech operate with sheer impunity.

A self-styled Hindu seer was found threatening the Muslims with genocide in Uttar Pradesh. However, the police have been nonchalant to ensure the majoritarian fascist conscience isn’t affected. The police, however, arrested two teenagers for listening to “Pakistani songs”. The situation no more bedazzles the Muslims, and most of them have stopped believing that there can be institutional justice, thanks to the unconcealed biases exhibited by the Indian state apparatus.

In these circumstances, the only relief the Indian Muslims have is that there will be no new anti-Muslim violence during Ram Navami until a year. However, there will be other forms of violence against the minority community over what its members wear, eat, do and wherever they go. The Jahangirpuri violence proved that in Delhi on Saturday, April 16th 2022, after an RSS-led Hanuman Jayanti procession tried unfurling saffron flags atop mosques.

Also, the poor and hapless Muslim vendors will experience vandalism and lynching. Muslim workers can lose their jobs, Muslim-owned shops will have to relocate from prime, mixed community markets to Muslim ghettos, etc.

When such a scenario is prevailing, India didn’t stop amusing the marginalised minority community by celebrating the birth anniversary of Dr BR Ambedkar with much fanfare. Seminars were organised, renowned people spoke about the man who was one of the architects of the Constitution of India, and many, including the bigoted government’s officials, pledged to make his dreams “come true”!

While Ambedkar’s dream of empowering the ostracised Dalits and other marginalised people—despite his problematic views about Islam and tribal communities—using constitutional provisions as weapons stand shattered, the Brahminical hegemonistic Hindutva camp, which he loathed all his life, has turned the Dalits into its foot soldiers.

These foot soldiers serve the upper-caste Hindu elites to form a theological-feudal Indian state where they will be treated as subhuman beings. Paradoxical, yet that’s how the situation has been. Ambedkar merely retains a place in the pantheon of modern India’s founders, whose words and wisdom have been flushed out of the system by the same Brahminical classes he feared would keep the Dalits enslaved.

From the current situation, all Hindutva-incensed bigots, backed by the Indian state, will continue to turn each Hindu festival into an occasion of Muslim bashing. Like the anti-Muslim violence during Ram Navami, more incidents will occur in the country, as the perpetrators are emboldened due to the state’s indifference towards the victims.