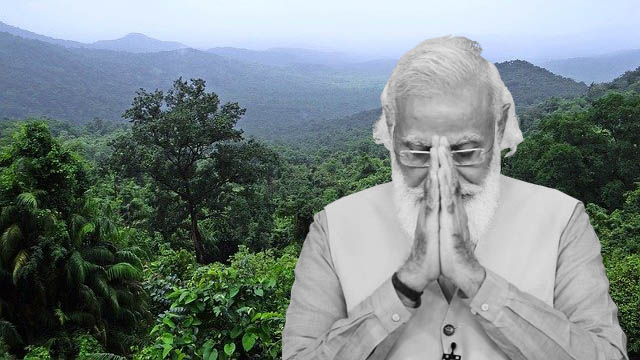 While celebrating Goa Liberation Day, Modi didn’t leave the scope to criticise India’s first prime minister Jawaharlal Nehru, under whom the ‘Operation Vijay’ was undertaken by all three branches of the armed forces against the Portuguese occupation of Goa, Daman and Diu, the first and the only time the Indian government dared to use its military prowess against a European country. Though Modi didn’t take the name of Nehru, he used the name of Vallabh Bhai Patel, India’s first home minister, to criticise the first prime minister.

“If Sardar Patel had lived for a few more years, Goa would not have had to wait so long for its liberation”, Modi said, citing the gap between India’s Independence in 1947 and Goa’s liberation in 1961. Patel, who imposed a ban on Modi’s alma mater and his Bharatiya Janata Party’s (BJP) parental body Rashtriya Swayamsevak Sangh (RSS) for its role in the assassination of MK Gandhi in January 1948, is ironically hailed by the prime minister and dispensation as a “nationalist”, who is placed against Nehru, who is called an “anti-national”.

Though Modi celebrated Goa Liberation Day, hailed the role of the anti-colonial agitators of Goa, and praised the Indian armed forces, he and Goa’s ruling BJP concealed how a new Goa liberation struggle is unfurling in the coastal state.

Thousands of people, farmers, workers, environmentalists, students, etc, from different walks of life, are opposing the three new development programmes undertaken by the BJP government to turn Goa into a coal hub and destroy its environment.

It all started with the 2016 SagarMala project when the Union government under Modi decided to increase Goa’s Mormugao Port Trust’s (MPT) capacity to increase coal transportation or handling in the state to 51 million metric tonnes per annum (mtpa). The current capacity is up to 12 mtpa. For this reason, the state government has cleared three infrastructure projects, which will have severe environmental repercussions.

The first disastrous project is of double-tracking of the 153-year-old Portuguese-built railway line. The track runs through the sensitive wildlife areas of Western Ghats—the ecologically-rich mountains that have been recognised as significant biodiversity hotspots—passing through the Bhagwan Mahaveer Sanctuary and Mollem National Park, and in front of the Mandovi River’s spectacular 320m Dudhsagar Falls.

The second project is the widening of the National Highway 4A, which will require land acquisition in the protected areas of the Mollem National Park and will violate the Environment (Protection) Act, 1986 (EP Act), though the Union government had given environmental clearance to the project. The Karnataka High Court directed the Union government to examine whether the project attracts certain prohibitions under the EP Act. The locals have alleged that the NH4A widening will have a severe impact on biodiversity and will increase pollution significantly.

The third project is the laying of the 240km-long, multi-stretch, Goa-Tamnar 400kv power transmission line, which will also pass through the Mollem National Park. The project involves the building of a 220kv sub-station in Mollem with a double circuit line of 21km. A 54km-long 400kv double circuit spread will be laid across Goa. This line will connect the states of Chhattisgarh, Goa and Karnataka.

Though the Sterlite Power, owned by the controversial British mining giant Vedanta group, which is laying this line, has assured the Goa government that less than 1,000 trees will be felled, that too outside the sanctuary area, the people are severely protesting this line due to the threat it poses to the environment.

Modi’s Union government gave the clearance for destroying nearly 80 hectares of the pristine forest region in April 2020, over a virtual conference, when most Indians were confined to their homes due to the first phase of the COVID-19 lockdowns.

The people of Goa started protesting vigorously against these projects from mid-2020 and have been relentlessly campaigning to stall them. Chief Minister Pramod Sawant’s BJP-led government remains tight-lipped on the protests and is implementing the orders from Delhi to ensure that the projects are completed on time.

According to reports, the sanctuary and the national park, which house endangered species, will suffer immensely due to these projects. Nearly 59,000 trees will be felled and 173 hectares of additional land in the protected areas will be diverted to the projects. This will cause severe, irreversible damage to the ecology of Goa as well as increase pollution caused by coal dust. Moreover, it will impact the tourism industry, which is one of the key industries of Goa.

The Supreme Court’s Central Empowerment Committee (CEC) has red-flagged the railway track doubling project from Castle Rock in Karnataka to Kulem in Goa. The CEC stated that the project will destroy the fragile eco-system of the Western Ghats, which is an internationally recognised biodiversity hotspot and one of the most important wildlife corridors of the country. The CEC has also suggested crucial changes to the other two projects to minimise environmental damages.

According to a report in The Indian Express, in its 110-page report, the CEC has asked the apex court to consider revoking the permission for the railway track doubling project. The CEC’s report said that the “project will only be marginally enhancing the capacity of the most inefficient section of the Railway Network passing through ecologically sensitive and bio-diversity rich Tiger Reserve, Two Wildlife Sanctuaries and a National Park (sic)”.

Even though Modi spoke in length with officials involved in and purported beneficiaries of the Swayampurna Goa programme, designed around his Aatmanirbhar Bharat scheme, he didn’t discuss anything related to the contentious projects.

Sawant has not spoken on the issue of people’s discontent as well. He and other BJP leaders are trying to douse the fire, through negotiations and intimidations, as the projects are closely connected with some of the principal donors of the saffron party like Gautam Adani, the Vedanta Group and the Jindals.

Adani and Jindal’s JSW are principal players behind the project to increase MPT’s coal handling capacity, as they want to import coals from Australia, Canada and South Africa to power the industries in Karnataka. These three projects are allegedly given environmental clearance only because of the involvement of such corporate houses who generously donate to the BJP’s and the RSS’s coffers.

The involvement of Adani-Jindal-Vedanta in these alleged catastrophic projects also exposes the hollowness of Modi’s claim at the COP26 Summit at Glasgow, where he asserted that India would get 50% of its energy from renewable resources by 2030 and will reach a net-zero target by 2070.

How can India reduce its carbon emission if the government overlooks environmental concerns and provide leeway to the big corporate houses to carry out ecologically destructive activities under the garb of “development”? How can India breathe when 59,000 trees will be sacrificed at the altar of “development”? What will the people of Goa gain from this “development” juggernaut, which would give them coal dust, toxic water and devastated forests?

The people’s fight against the Adani-Jindal-Vedanta troika is no less than a new Goa liberation struggle. Rather than cherishing the relics of the past on the Goa Liberation Day, Modi must read the writing on the wall. The involvement of major corporate houses indicates that neither the BJP nor the Opposition can take a stand against this “development” juggernaut, therefore, the people’s only option is to intensify their movement against the aggression on their water, forests and land.