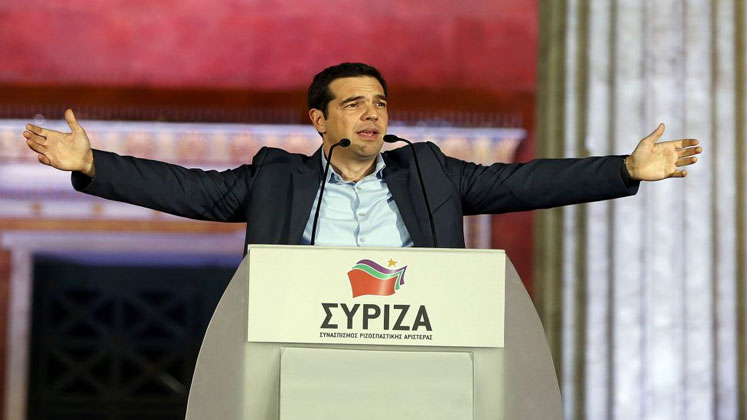 The debt ridden Greece made a crucial 3.2 billion euro debt repayment on Thursday, 20th August, using newly released bailout funds from the Troika, led by US-German-French monopoly finance capital, a government source said, as a senior minister argued for quick elections following a rebellion of the left wingers against the capitulation of Prime Minister Tsipras in the ruling Syriza.

The repayment to the European Central Bank, though delayed the collapse of Greece economy, but Prime Minister Alexis Tsipras is entangled in a political crisis after anti-bailout rebels ripped the Syriza government of its parliamentary majority. This made Tsipras to declare in melodramatic style, parliamentary elections in Greece, during a television show.

Energy Minister Panos Skourletis, a close Tsipras adviser, said the split had to be dealt with. “The political landscape must clear up. We need to know whether the government has or does not have a majority,” he told state TV channel ERT.

Tsipras, through a volte face, got the bailout through parliament only with the support of opposition right wing parties, who said they did so merely to save the nation from financial ruin. Tsipras earlier said he will call for a Party Congress of the Syriza to resolve political differences, however, Skourletis, a pseudo left – pro Troika representative within the Syriza said it will be better to call national elections first, then a party Congress.

Critiques of the Syriza among the leftists said that the urgency showed by the Syriza leader to call for an election is to deceive people and use opportunities to align with pro bailout and pro austerity parties to form a national government at Athens which can serve the interests of the big monopoly and finance capital bloc led by the Troika of European Central Bank, the European Union, and the International Monetary Fund. The left sections of Greek polity, including the KKE (Communist Party) condemned the capitulation of the Tsipras regime to the same clique of international monopoly capital who has aggravated the Greek debt crisis through their well engineered plot that involved the right wing politicians and big capitalists of Greece.

Briefing on the new political crisis and the Syriza’s opportunist attempt to hoodwink the people of Greece, a recent KKE press statement said:

The effort to set up a SYRIZA Mark 2, now that any doubts about the role of Mark 1 are dissipating, must not be welcomed at all by the people, who have already experienced the painful refutation of the expectations which it fostered. There is no room for new disappointments, for the wasting of valuable time again, which will be at the expense of the people.

The people have experience. They can draw conclusions. They must not be deceived again. There can be no solution in favour of the people inside the capitalist system, with the alternation of governments of bourgeois management. There can be no solution without a rupture with the capitalist development path and imperialist system. The people must not be deceived by those who prioritize the productive reconstruction of the capitalist economy as their main goal and indeed served this very goal as members of the government. All those who give a nod and a wink to sections of capital that are flirting with the idea of a national currency can not follow a different path other than the one that leads to the people’s bankruptcy. It is not important whether this is carried out via a memorandum or not. It is not important whether this is carried out inside the Eurozone or outside. What is important is that the efforts to trap the people in yet another choice in favour of capital must be thwarted.

The Greece crisis has crystalised the crisis of the monopoly capitalist production system and the omnipotence of finance capital in the economy. Going ahead the government of Greece, formed under any political clout will try hard to push the austerity measures to ensure that the demands of the US-German-French capital are met and the Greece economy is squeezed to repay the money to the monopoly-finance capital bloc for those debts which were taken by the government and the big capitalists for their own gains.

A strong mass movement is rising like a high tide in Greece, with anti-austerity protests taking the foreground, the deception of the opportunist Syriza is not enough promising to hold the wave of people, especially the workers, the students, the unemployed youth from strongly resisting the anti-national and anti-people policies of the Tsipras regime.