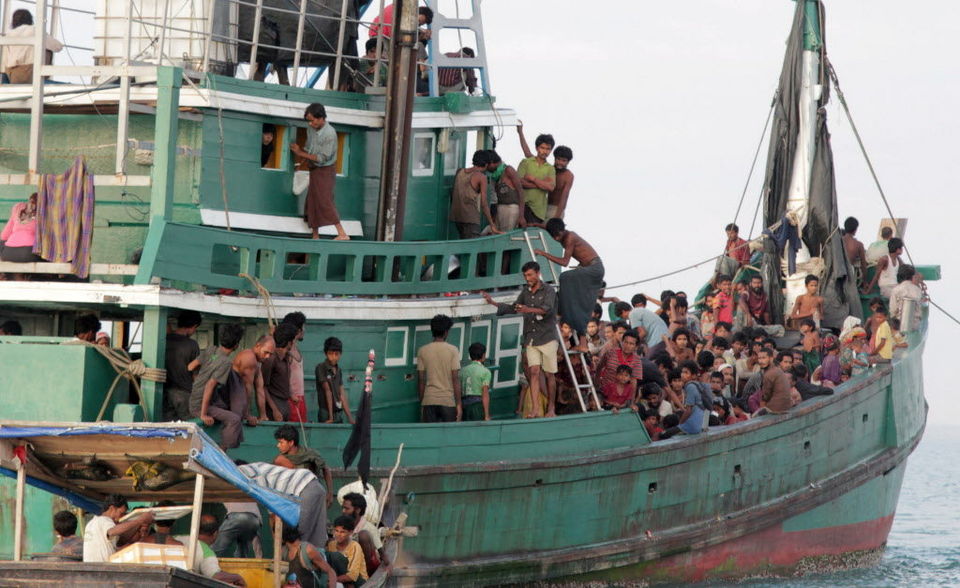 The recent plight of the Rohingya Muslims of Myanmar has drawn international attention towards the most oppressed community in the South Eastern Asian region. The Rohingyas are a community that lives in the Rakhine province of Burma bordering Bangladesh, and approximately 25000 Rohingyas of the one million strong community has fled Myanmar and Bangladesh due to the extreme oppression on them.

The extremist Buddhist organisation has unleashed a reign of terror on the minor community blaming them to be the root cause of problems in the poor province of Myanmar. The puppet government of Myanmar working as per the directions of the reactionary Junta has overtly and covertly supported the terror attacks on the community whose members were killed en masse, houses torched and women raped since years.

The story of the animosity toward Myanmar’s Muslims, particularly toward the Rohingyas, from the central government and the nation’s Buddhists, particularly by the Rakhine Buddhists, goes back centuries and, in modern history, has certain notable flash points.

But it’s a history that started in relative harmony.

The Rohingya Muslims were living in the Rakhine region of Myanmar since a long time, and had a notable presence when Burma gained independence in 1948. The U Nu government of Burma recognised the Rohingya Muslims, provided them instant citizenship upon entrance from Bangladesh, then East Pakistan and even allowed them to serve in the administration.

However, since 1980’s few incidents of violence and a formation of sectarian Muslim groups later in the region was used by the later military junta to incite anti Rohingya sentiments in the regions. The theory of RSS about a Muslim domination of India unless the Muslim population is kept under control by Hindu domination was found in the theory and practice of the Myanmar Junta sponsored Buddhist extremist groups, that started exaggerating the threats from the Rohingya Muslims among the ethnic Buddhist people.

Myanmar’s military autocratic regime used those fears propagated by Buddhist extremists to consolidate its own power, and a handful of attacks by violent Muslim and Rohingya separatists have reinforced the notion that Rohingyas are not trustable as a community.

The 1982 citizenship law of Myanmar stripped most Rohingyas of Burmese citizenship and left them without much rights under either Burmese or international law. It also gave credence to xenophobic rhetoric from the government and Buddhist monks, including claims that the Rohingyas are not indigenous Burmese at all, but illegal migrants who trespassed into Myanmar from Bangladesh with the intent of seizing power by force to create a radical Muslim state which will butcher the ethnic Buddhists. The spread of Islamophobia across the world following by the US government to divert the mass attentions from the real problems of economy and politics to religious conflicts fanned the anti Rohingya sentiments in the Rakhine region.

Since the massacres of the Muslims by the Buddhist extremists in 2012, thousands upon thousand of people of the Rohingya community started fleeing Myanmar in search of a land which will accept them without any bias or hatred. However, their exodus brought nothing much as no nation considered them worthy to be accepted rather fit to die on boats in mid sea. Even the Muslim ruled or dominated nations like Malaysia and Indonesia refused to accept the Rohingyas stranded in the sea, and Australia of course showed its apartheid attitude to the people in distress.

Thousands are believed to be stranded at sea as countries such as Thailand and Malaysia are reluctant to allow the refugees onto their shores, making the plight of the Rohingyas all-too-reminiscent of the Jewish passengers from Germany and Eastern Europe who fled the Nazi threat in 1939 aboard the MS St. Louis. The ship was denied entry into Cuba and Florida and forced to return to Europe.

The self styled sympathiser for “human rights”, the US and the EU are all too silent on the plight of the men with no land, stranded in the sea and does not consider it to be a humanitarian crisis, and have toned down their anti Myanmar rhetoric since the reformed government, a puppet of the autocratic Junta, has allowed immense opportunity to the monopoly capital of these countries to exploit the resources of Myanmar and conduct their business.

Aung San Suu Kyi, an American sponsored activist of Myanmar who fought to advance the cause of US monopoly capital in Myanmar by hoodwinking the people and derailing genuine mass struggles waged against the autocratic government, is now surprisingly silent on the issue of the Rohingya people and their ethnic cleansing done systematically by the Buddhist extremists with state support. Suu Kyi even did not took up their case or fought for them when another long term agent of US interest in South East Asia, the Dalai Lama, urged her in public to do so. This clearly indicates the nexus between the ruling classes of Myanmar and the monopoly capital of US and EU that has virtually supported the ethnic cleansing of the Rohingya tribe in Myanmar and forced them to evict their land and homes for an uncertain future in the sea.