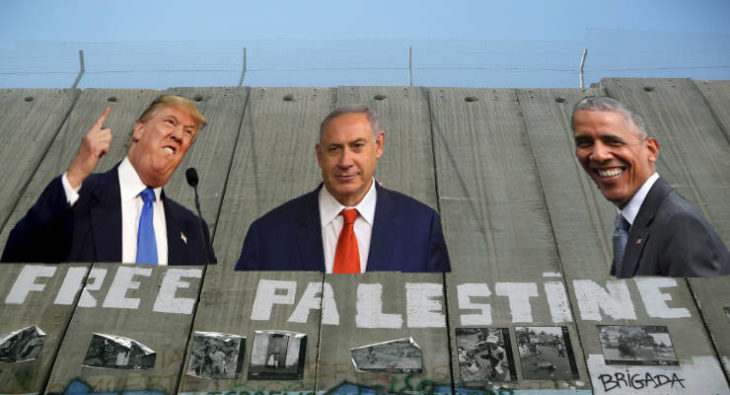 The 15 member United Nations Security Council adopted a resolution on 23rd December, asking the Zionist Israeli government to stop building settlements in Jerusalem and West Bank. The Obama administration took a cunning diplomatic step when it abstained from the UN security council vote on the resolution moved by New Zealand, Senegal, Malaysia, and Venezuela. Egypt, which was one of the parties to the resolution, backed off after the Zionist Israeli regime and the US president-elect Donald Trump threatened the Sisi regime.

The resolution was passed with a 14-0 mandate and it was the first instance in years that the US didn’t veto a resolution that condemned the Zionist Israeli government for its aggression on the Palestinian soil.

The US and world politics, including the political theatre of the Zionist Israel, went through a thunderstorm since the resolution was passed and it made headlines due to the US abstaining during a crucial voting on one of its oldest satellite state and outpost in the Middle East Asia.

The Zionist Israeli government rejected the UN resolution and adamantly declared that it will not heed the advise or abide by any orders from any international community. The butcher of Palestinian people and the running canine of the US interest in the Middle East Asia – Benjamin Netanyahu condemned the resolution of the UN. “Israel rejects this shameful anti-Israel resolution at the U.N. and will not abide by its terms,” Netanyahu said in a press release issued by his office.

The Zionist Israeli government’s ring-leader and the butcher of Palestinian children definitely knew that this resolution passed by the UN is as much ineffective and blunt as much is the United Nations itself. The Obama administration is going out and a staunch pro-Zionist Islamophobic fascist government led by Donald J Trump is going to come in power from 20th January. In these circumstances, even a Palestinian child knows that this type of UN resolutions doesn’t carry any more weight than a piece of scrapped paper.

The US remained a long-term ally of the Zionist Israel and the Obama administration never thought twice before blocking all resolutions in the lame duck UN that condemned or opposed the ghastly massacres committed by the Zionist Israel government.

The Obama administration with John Kerry being the principal policy advisor on Middle East, tried to hoodwink the people of the world through this cunning abstaining from the vote rather than killing the resolution, alike similar resolutions of the past, using veto.

The Obama administration wanted to portray itself as a regime that cares for the cause of the Palestinian people because it wanted to build up a support base for the anti-Syria ring it has formed with its Middle East Asia stooges like the Zionist Israel, Saudi Arabia, Jordan, Qatar, and Turkey.

The Americans, since the era of Bill Clinton, were trying to build up a big rift and sectarian division in the Middle East Asia by pitting the Sunnis and Shiites against each other and use the antagonism in its own favour to topple the governments that it despised for their anti-US standpoint.

The US used the “divide and rule” policy of the imperial Britain during the invasion of Iraq and the violent toppling of its President Saddam Hussein by inciting sectarian violence between the minority Sunnis and majority Shiites of Iraq at the beginning. The same policy is now used in Syria by pitting the majority Sunnis against the minority Shiite people and moreover, now the US is trying to pull in the support of the Palestinian people for the Wahhabi terror forces it’s pushing into the Syrian territory to overthrow the government of Bashar al-Assad.

Due to the constant set-backs that the US and its allies, including the public rivals like the Zionist Israel and Wahhabi Saudi Arabia, faced in Syria recently the US administration under Obama and Kerry was trying hard to do an image make-over for the Democrats in the region, so that in the future the general hatred that brews against the US government in the region – simply vanishes.

If the Obama administration had an iota of concern regarding the rights of the Palestinian people then Hillary Clinton and John Kerry should have been funding the rebels of Palestine to overthrow the occupation forces of Zionist Israel rather than funding billions of dollars to the “moderate rebels” aka ISIS and Al-Qaeda in Syria to topple the government of Bashar al-Assad. The US should have imposed a trade embargo and a complete ban on military assistance to the Zionist Israeli government and through an international coalition it should have forced the Zionist regime to flee from Tel Aviv. These measures are not new for the US, the Americans used a similar strategy to oust Saddam Hussein, tried to topple the governments in North Korea, Syria, Iran, and Cuba.

The blatant condemnation of the resolution by the Zionist Israeli government and its denial to abide by the UN mandate shows that the newly empowered section of the US ruling class – represented by Donald Trump, and the likes of Netanyahu has already reached a deal regarding the reversal of any such condemnation of its aggression on West Bank, Jerusalem, or other parts of the Palestinian land occupied by the Zionist forces.

The US president-elect Donald Trump declared on Twitter that he vehemently oppose the resolution passed by the UN. Trump Tweeted: “As to the U.N., things will be different after Jan. 20th.” (sic)

As to the U.N., things will be different after Jan. 20th.

Republican Senator from South Carolina, Lindsey Graham, condemned the resolution and threatened to stop the US funding to the UN after the Donald Trump administration comes to power. The US government provides nearly 22 per cent of the UN funding to keep the international body a puppet of Washington DC and Wall Street. The Republican Senator revealed how much the US ruling class despise the Palestinian people in particular and the Arabs in general for their struggle against the occupation of their land by the Zionist Israeli aggressors supported by the West.

Donald Trump has already signalled that his government will unleash a new era of terror and destruction on the people of Middle East Asia through a host of pro-Zionist measures. The US administration under Donald Trump will see the far-right and pro-Zionist xenophobic extremist like David Friedman taking up the role of the US ambassador to Zionist Israel. He is infamous for his advocacy of a greater Israel and eviction of all Palestinian people from their land.

Friedman is a staunch opponent of the right of Palestinians on their land and even finds the demand of “two-states” as unrecognisable. David Friedman spoke on various occasions exposing the immense bigotry he carries with himself as a true Republican.

By filling up his team with zealots and by intensifying his support for the Zionist state of Israel as his chief ally in the Middle East, Donald Trump will ensure that the new administration of the US will continue the mayhem in the Arab heartland. Though Trump is now vocal on the support of the Obama administration to the terror groups in Syria, including the different auxiliary units of the Daesh, the Trump regime will continue the same policy of engagement with Islamic and Zionist mercenaries to wrest control of the crucial oil sector of the Middle East Asia.

Through such scrap-paper-resolutions the UN may try to show that it’s still in process of according a statehood to the Palestinian people, however, it’s evident that the UN is a party to the conspiracy of imposing the ineffective “two-state” solution on the people of Palestine, who are determined to achieve their legitimate freedom from the Zionist Israeli government’s occupation and aggression.

The Palestinian people will certainly heighten their struggle for freedom without compromising with the murderous terrorist regimes of Tel Aviv and the fascist war monger Trump regime. Their new struggles against the injustice and oppression laden upon them by the White House – Langley – Pentagon – Wall Street- Tel Aviv clique will surely lead the land of Palestine to usher into an era of freedom and democracy.