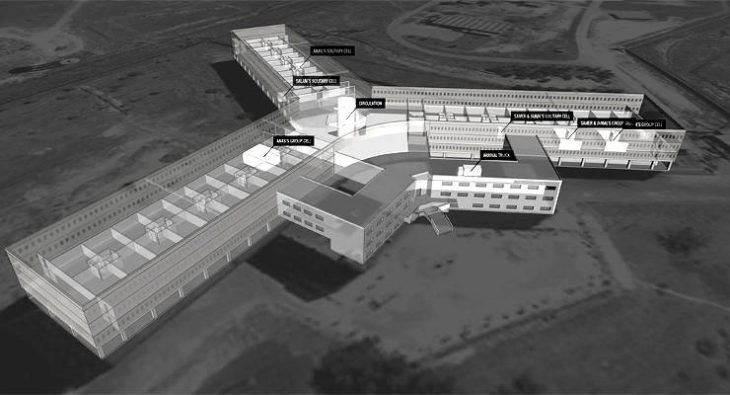 There is no dearth in the propaganda of the Western mainstream corporate media against the Syrian government. Now openly supporting the terrorists and affiliates of the Islamic State, the BBC has started milling lies by quoting a fabricated report of the Amnesty International, a docile tool of the Western monopoly capital owned corporations; the BBC is alleging that the Syrian government has executed thousands of prisoners in the Saydnaya prison north of Damascus.

Recently the BBC, along with other Western media outlets like The Guardian, The Independent, started broadcasting a fabricated tale accusing the Syrian government of torturing and executing 5000-13,000 inmates (see the huge bandwidth allocated to accommodate an imaginary number of so-called “victims”) in the Saydnaya prison.

The story was first conceptualised by the Amnesty International, which along with the Syrian Observatory for Human Rights and White Helmets, is at the forefront of the Western corporations’ propaganda and perception building platoon in its covert war against the legitimate government of Syria, using the Islamic State and so-called ‘moderate rebels’ as their pawns.

Amnesty International’s story on the mass executions committed by the Syrian government was copied and circulated en-masse by the Western mainstream corporate media to feed its subscribers with the toxic lies.

However, apart from spreading the lie, the Western mainstream corporate media is also adding more toxic substances to the already weak, unsubstantial story to make it look strong and durable.

The BBC went to the extreme by putting up a fictitious tale on its magazine section, which narrated the memoirs of an imaginary Syrian woman born in Britain, who was imprisoned in the Saydnaya prison for 36 days.  The woman, ‘Farah’ (of course no real name) was arrested by the Syrian government (for undisclosed crimes) and tortured in the Saydnaya prison for 36 days and then suddenly let off by the very ‘cruel’ Syrian government and she was even allowed to return to the UK unscathed.

A classic BBC story that will remind you of the Hollywood films that depicted Soviet gulags and ‘inhumane’ communist atrocities during the height of the cold war.

This story is written by BBC’s Newsnight journalist Secunder Kermani, who had close connections with ISIS operatives in Syria and his alleged links with the terrorist organisation, and BBC’s endorsement of the terror group became evident, when through his imaginary character’s narration, Kermani asserted that the ISIS is better than the Syrian President Bashar al-Asad.

Through an unapologetic advocacy for the overthrowing of the Syrian government instead of a tough battle against the ISIS and its auxiliary terror units that are called ‘moderate rebels’ by the Western powers and their lackey media houses, the BBC and the Salafist journalist on its payroll exposed the cheerleaders of the ISIS in the corporate mainstream media and those who are actually working as the unofficial mouthpiece of the terror group in the West.

At a time when the Syrian government is successfully diminishing the hopes and aspirations of the ISIS and its fundraisers regarding the establishment of a pro-Western Saudi Arabia styled theocratic monarchy in Syria, the Western powers and their different ‘civilian’ arms of military campaign, like the Amnesty International and the ‘Syrian’ organisations based in the UK, are carrying out desperate propaganda wars to turn the tide of the war against the Syrian government in order to help the US and Western-backed terrorists to seize power in Damascus and to execute President Bashar al-Asad alike the deposed former President of Iraq, Saddam Hussein, and the Libyan ruler, Muammar Gaddafi.

The Amnesty International remains conspicuously silent when the US backed Saudi Arabian government massacres children and women in Yemen, it pay lip service to humanity when Zionist Israel butchers innocent Palestinian men, women, and children alike, it remains mum when the US executes black people on the streets, or when the Western-backed ‘moderate rebels’ butcher people en-masse in Aleppo and other parts of war-torn Syria.

However, on the basis of the so-called testimony of a former guard and three former prisoners of the Saydnaya prison, the Amnesty International brought the figure (based on hearsay) of 5000 to 13,000 victims, which some corporate mainstream media houses of the West even made “at least 13,000” victims. Sarah Abed  busted the lies of the Western mainstream corporate media by exposing their stories in this article.

The Amnesty International, which is funded by the notorious CIA outfit, Ford Foundation, along with other so-called charity institutions and foundations (think tanks and civilian forces of global monopoly and finance capital) has carried out extensive campaigns against all those forces that the US establishment and its ruling corporations despise and the Amnesty International also used its power to influence mass opinion regarding a particular government that helped its Western masters.

As the Western powers, including the US and the UK, are weak in the battle ground of Syria despite funding millions of dollars to the so-called ‘moderate rebels’ aka ISIS and Al Nusra, they are relying heavily on the propaganda war to carry out their perception building exercise that is based on smear campaigns against President Bashar al-Asad and which aims to create a negative perception about the Syrian government among the people of the West.

The Saydnaya prison tale is now erected quite weakly and all mainstream corporate media houses of the West have left the onus on the Amnesty International due to the shaky foundations of the story.

However, it doesn’t mean that the Amnesty International or the other wings of the Western monopoly and finance capital will desist from the propaganda battle against President Bashar al-Asad. Despite the failure of the Saydnaya prison story, they will come up with something new every now and then; luckily they will be less believable each time.