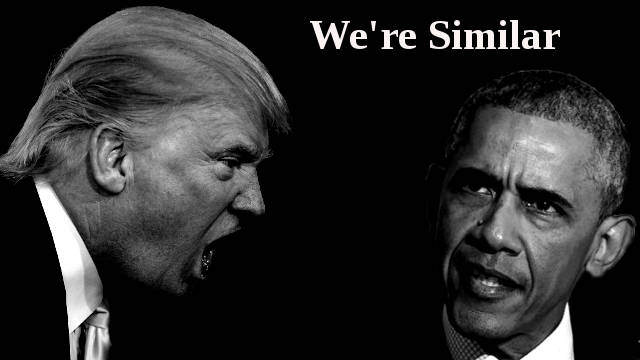 The US President Donald Trump signed an executive order in January, dubbed as “Muslim Ban” order, which was partially rejected by the Federal Court later; it banned the entry of immigrants and visa holders from seven Muslim-majority countries from entering the United States for 90 days.

The executive order of President Trump also bans any refugee admissions for the next 120 days, it banned refugees of Syrian war for an indefinite period and it placed the Christian refugees at the front of the line, which displayed the utmost unapologetic bigotry that is now promoted by the US ruling clique represented by Trump.

The new presidential order is actually a re-worked Obama doctrine, which was executed in 2011. The Obama administration at that time banned the refugee admissions from Iraq for six months. Trump modified it to add six more countries and present it as a terrorism-checking mechanism. The countries from where people are banned from travelling to the US are Iraq, Iran, Libya, Somalia, Sudan, Syria, and Yemen.

In a statement released recently, Donald Trump claimed that his executive order that banned the visa holders, permanent citizens of the US, and refugees from the seven countries is misrepresented as “Muslim Ban”; he informed the press that the mainstream media is intentionally obliterating the essence of his decision, which according to Trump, is taken to protect the interest of the United States.

Donald Trump said that his government has not banned the entry of Muslims into the US as most of the forty-plus Muslim-majority countries are kept out of the ambit of the executive order and said, “to be clear, this is not a Muslim ban, as the media is falsely reporting. This is not about religion — this is about terror and keeping our country safe.”

Violence by Muslim terrorists in the US

Throughout his campaign trail, Trump repeatedly promised a Muslim ban in the United States, which he asserted, would stop terror attacks in the US. His xenophobic campaign allowed him to garner support by polarising the majority of White Christian votes.

His bigotry-filled rhetoric against the Muslims and his reliance on the waves of Islamophobia made him standout as a strong contender who could play with the inherent fears of a White American mind.

Though the Trump administration will claim that this measure would prevent terror attacks and save American lives, they will fail to provide any evidence or data on the actual number of American people killed by the residents of these countries in the last twenty years. The number of terror plots executed by the Iraqi, Iranian, Libyan, Somalian, Sudanese, Syrian, or Yemeni people is stuck at zero.

Recently a study by Duke University sociologist Charles Kurzman showed that terrorism by Muslims makes up one-third of one per cent of all murders in the US. Surprisingly the Trump regime didn’t bother to think about Saudi Arabia or Pakistan, the citadels of Islamic terrorism funded and supported by the United States when the executive order was issued.

Despite such small amount of deaths caused by the so-called (CIA created) “Muslim terrorists” in the US, the Trump regime and its sycophants could successfully instill extreme Islamophobia among White Christian Americans, which helped it to carry out its own political mission of establishing a global hegemony of its favourite corporations by defeating the old guards of the US monopoly capital, which the club of Obama and Hillary Clinton, the founders of the ISIS and patrons of the Zionist Israel, supported and served wholeheartedly.

Allies aren’t threats if they honour the US business interests

The so-called “Muslim ban” order of Donald Trump left the most notorious countries from the ambit of travel ban despite numerous evidence of their citizens and governments supporting Islamic terror groups and fundamentalists in the past. These countries like Pakistan, Saudi Arabia, Bahrain, Jordan, etc. have been great ‘allies’ of the CIA and American corporations in their pursuit to plunder the resources hidden beneath the soil of Asia and the entire Middle East.

Probably Trump forgot that the Saudi Arabian, Jordanian, and Pakistani citizens were responsible for some of the most ghastly attacks on the American people under the garb of “Islamic Jihad”, he probably ignored that the Saudi Arabian clerics, or those funded by the kingdom, are spreading the most violent and most bigoted version of Islam throughout the world using a large network of evangelists and seminaries. But Trump needs oil and it’s for the precious oil that the political Islam was once begotten by the US.

As per the estimates of the US state department itself, its puppet monarchy in Riyadh invested close to $10 billion in the evangelism of the most intolerant version of Islam worldwide since the 1970s and they got huge return on investment in the form of extreme allegiance of the Islamic preachers and leaders of the world towards the Saudi monarchy and a large contingent of foot soldiers that the Saudi Arabia could put to use in any of the US missions across the world.

The funding received from Saudi Arabia and its neighbouring Qatar helped the ISIS to strengthen itself in Iraq and Syria and escalated the Syrian civil war, which ripped apart the country through extreme violence that caused nearly 350,000 deaths in the last five years. Along with their American masters, the Saudi and Qatar monarchies are very keen to see an “autocratic” president like Bashar al-Assad toppled and a friendly Wahhabi regime installed in Damascus, which will be controlled by the Gulf monarchies and the Zionist Israel at the command of Washington DC.

Donald Trump’s business interest is spread across the world and apart from the US interests, these hotels and real estate projects that are funded by Trump’s enterprises, would face a real hit if he dared to trouble the Saudi Arabian or other Gulf monarchies, who have played the roles of faithful American puppets in the Middle East.

Syria is undergoing a tough civil war that the Western powers led by the US funded and supported since the last five years to topple the Bashar al-Assad led Ba’athist government.

In Libya, the NATO forces under the leadership of the US government launched an aggression that toppled the government of Gaddafi, the Libyan leader who ruled the country against the Western wish for years.

As the government of Iraq under Saddam Hussein denied the US and its partner, the UK, undue trade advantage and control over its oil resources, the latter decided to topple the government and mire the former citadel of secular Arab republicanism into the mire of sectarian violence and religious bigotry. After the trade embargo and sanctions of the US killed nearly 500,000 children in Iraq during the rule of Saddam Hussein, Iraq is now suffering due to the rise of the ISIS that was actively funded by the Saudi Wahhabis, the CIA, and the Israeli secret service agency, Mossad.

The US imposed severe trade sanctions and embargo against the Iranian government that it has placed in its “Axis of evil” list. Since the Middle Eastern country that challenges the domination of the Saudi Arabia in the gulf started pursuing its goal to utilise nuclear power for electrifying itself, the US sanctions became hard. Lately, the Obama administration forced Iran to discard its nuclear programme in return of partial uplifting of sanctions.

Under the patronage of its American masters, the Saudi Wahhabi warlords launched a brutal attack on the civilians of Yemen in 2016, which, until now, has killed thousands of innocent people. In order to impose a Salafist government on the people of Yemen, the Saudi Arabian monarchy is relentlessly killing the people of the small country and the massacre of the people in Yemen is still overlooked by the Western mainstream media, because, the Saudi Arabian monarchy and its Wahhabi bigots are the angels of peace and prosperity for the West.

In Somalia, the US supported Salafist terror group Al-Shabaab launched an all out rebellion in various parts of the impoverished African country, causing severe destruction and political instability. The CIA doesn’t want any political stability in Somalia to ensure the Western corporations can plunder the resources of the country without any popular resistance.

Sudan remained under the radar of the US since a long time and the US sponsored Al-Qaeda started functioning in the country since the 1990s to peddle the Salafist bigotry among the people. Sudan is ripped apart by Islamic terror since a long time and numerous people became victims of terrorism.
While all these countries that are either victims of the US repression or are torn apart by Saudi-US funded Wahhabi terrorism, the US government intentionally blocked the entry of their citizens to, on one hand, hoodwink the White Christian American people in believing that the people of these countries are responsible for terror strikes in the US, and on the other hand, to hide the real culprits responsible for the so-called “Islamic terror” that is considered a menace globally.

Trump’s fascist steps are hailed by his allies in the Russian government, in the UK, by his Hindutva followers in India, and moreover, by the Zionist Israeli regime. Trump’s decision to officially discriminate citizens of the US on the basis of their religion, colour, creed, and race is actually a manifestation of the deep crisis in which the US capitalist enterprise, which hosts the global capitalist system, is mired in.

The US government is always led by those who are staunch followers of the monopoly capital system and believes in dominating the world on their own terms. Donald Trump and his administration show the real grotesque face of the US ruling clique that was masqueraded with a ‘liberal’ mask by Nobel Peace Prize winner Barack Obama’s administration.

To fulfil its commitment to world peace the Obama administration dropped record number of bombs on the same Muslim majority countries itself or through its allies, for which the democrats are now shedding their precious crocodile tears.

It’s an irony that the supporters of the Obama regime are now called “left-wing” in the US and by that dictum, even the mainstream corporate media houses are now labelled as “left” by the Trump administration.

This has given an extra arm to the Trump regime supported by the most reactionary corporations of the Wall Street, to target and vilify the real left and socialist voices within the US polity.

The Muslim ban by the Trump administration will apparently fail to contain any terrorist activity, if any outside the US secret service’s purview; however, it will help Trump and the corporations that support him to polarise the American white Christian populace along with the Islamophobe upper-caste Hindus led by Shalabh Kumar and the Rothschild led Zionist lobby in favour of the Republicans and the new global order they are trying to build under Donald Trump’s regime by redividing the world among few Western capitalist powers, including Russia.