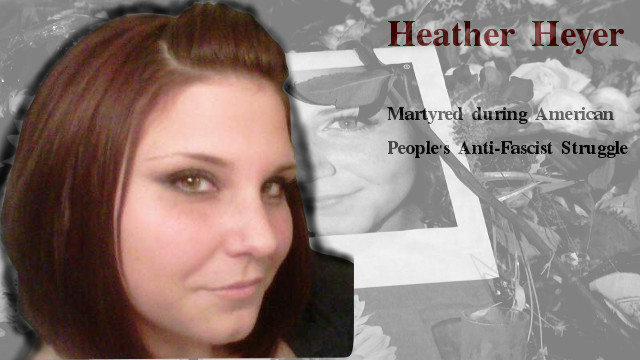 Donald Trump is now under attack from all quarters, including the Butcher of Baghdad and Kabul – George W Bush and his father George Bush Sr. condemning the Presidents standpoint on the recent Charlottesville violence, where Trump blamed both sides, i.e. the fascist white supremacists and the anti-fascist and anti-racist protesters who came under attack from the former, which involved an act of car terrorism on 12 August carried out by a fascist supporter, resulting into the tragic death of one of the valiant anti-fascist protesters – Heather Heyer.

Throughout the US and the world, Charlottesville is now a name that’s synonymous to a modern day battlefield between the liberal Americans, the democracy-loving people of America, the people of colour and immigrants of America and the white supremacist fascist forces, whose active support and engagement helped Donald Trump to win victory in the Presidential polls.

Last week Charlottesville in Virginia, the town that houses the University of Virginia and was also a resident of Thomas Jefferson, the former president and one of the architects of the US constitution, experienced a new shrill panicking down its spine, when the fascist Unite the Right rally, called by an umbrella organisation acting as a cohesive to hold together different white supremacist, neo-Nazi and fascist organisations, including the factions of the infamous Ku Klux Klan, decided to hold a rally against the decision of the city council to remove the statue of Confederate Robert E. Lee from the Emancipation Park, which was formerly named after him.

The anti-fascist left, the members of the church, people of colour, immigrants, Muslims and Jews arrived together with a single determination to thwart the hatred-spewing fascist rally in the midst of the peaceful town and they organised a counter-march against the fascist bloc. During that rally, 20-year-old Ohio resident, James Alex Fields Jr. drove his Dodge among the protesters, killing 32-year-old anti-fascist Heather Heyer on the spot and injuring 20 others. A police helicopter crash killed two more during the rally and these incidents brought Charlottesville into the national and international limelight.

As per this report in the Independent, which tells us about how the white supremacist, fascist KKK leader expressed his happiness over the death of paralegal and anti-fascist protester Heather Heyer, we will find a resemblance in the statements issued by the fascist leader and the fascist American President.

While Justin Moore, the Grand Dragon of the KKK said that “We should have been able to go out there and have our protest and it should have been peaceful but it’s the anti-fascist and the communists … continuing to try and stop us. So I think there will be more violence like this in the future to come.” President Trump echoed the epithets of the fascist scum, by saying, “I’m not putting anybody on a moral plane. You had a group on one side and group on the other and they came at each other with clubs – there is another side, you can call them the left, that came violently attacking the other group. You had people that were very fine people on both sides.”

This unapologetic batting of Trump on behalf of the fascists and saying that the Neo-Nazis have good people among them actually shows the true characteristics of the US ruling clique, which is essentially white, absolutely reactionary and utmost fascist in its political and economic outlook. The US ruling classes, who have massacred millions of innocent people throughout the world using nuclear weapons, chemical weapons and weapons of mass destruction, are the most racist, sheer bigotry-filled capitalists, who would go to any extent of violence and bloodshed to protect their neo-colonial empire throughout the world and the military subjugation of the people of Asia-Africa and Latin America.

The liberal and democratic veil that shrouded the grotesque true-self of the US ruling classes since the end of the First World War, to prevent the outbreak of a Bolshevik-inspired revolutionary movement in the North American continent, is no more a profitable option for the big corporations to maintain, as the latter that rules American people and the world through its guns and missiles, are quagmire in deep economic crisis and a war-torn world, where new direct colonies can be established in the countries like China, Syria, Iran, Venezuela, Brazil, etc. is what they are desiring at the moment.

To bring the world and the US society at the brink of a war and to arouse xenophobia to drive huge mass support for such wars, like what the Bush Jr. did with the help of Coleen Powell and Dick Cheney between 2001 to 2003 to gather support for their military aggression against Afghanistan and Iraq to conquer these countries and make them US colonies. Xenophobia serves the jingoistic purpose of the US corporations and the military-industrial complex that want wars throughout the world to redivide the world and exploit more resources of those countries that still dare to challenge the US hegemony on the global plane.

Only the fascists, especially the anti-Semitism, Islamophobic, utmost chauvinist, racist and bigot fascists of the US can help these corporations that brought Trump to the power seat to fulfil their nefarious agenda. This is the reason that James Fields Jr. is charged with a second-degree murder and not accused of an act of terrorism, though the Governor of Virginia, Terry McAuliffe, condemned the act as an “act of terrorism” outright.

The sheer hypocrisy of the US government and its administration, including the media, would have been visible if a Middle-Eastern man, with an Arabic name, would have crashed into the rally, killing people chanting “Allahu Akbar” loudly. The entire American controlled international corporate media houses would have concocted numerous tales around the alleged threat to Western Democracy and free speech from Islamist “terrorism” and would have fanned a witch hunt of the Muslims and strengthened the arms of the Trump government.

As the killer, Fields, himself is a white man, a member of the US ruling clique’s clan, therefore, he is no more called a terrorist; the KKK and the Neo-Nazis, who inspired him to kill people and did support the violence meted out by the white supremacist hate-mongers in Charlottesville, including the murder of Heyer, are not clamped down, no FBI came down heavily upon them, the CIA isn’t investigating their global networks and the global counter-terrorism organisations are not putting their names among the blacklisted terror organisers, where many left-wing and nationalist organisations that are leading democratic struggle on behalf of toiled and oppressed people are listed.

The US government and the ruling clique is now showing its true colours to the world, frightening the very liberal bourgeoisie who adored the American system and its counterfeit democracy validated by a constitution that was drafted by the slave-owners who wanted to dominate over the black people and anyone who wasn’t rich. The fascist forces, the Neo-Nazi and Ku Klux Klan, the white supremacists, etc. are the firm defenders of the very agenda over which the mercenary American system is founded and it is spilling blood on the streets, through terrorist ways, using the full-fledged covert support of the US ruling classes and the big corporations that own the mainstream media, which in turn criticises the violent acts as they tore the mask within which these media outlets conceal the threads through which those very fascist ring leaders control them.

Heather Heyer, like thousands before her, didn’t become a victim of racist violence but became a martyr fighting fascism with an ideology that promoted an egalitarian societal idea. Maybe she was another liberal, 30-something happy-go-lucky woman who disliked racial discrimination, but in a Trump-ruled America, which is returning to the roots of the foundation of the US imperialist state, automatically became the target of the bloodthirsty fascists who are keen to keep people enslaved, plunder colonies and massacre millions to preserve the hegemonic rule of the US on the world.

The opposition to the fascists by the reactionary Republicans and Democrats, including the killers of millions like the Bushs and the Clintons, is a decoy employed by the US ruling classes to show diversity at a time and place when and where there is none. It’s a sham, a hoax to hoodwink the people of America, especially its liberal, peace-loving, pro-establishment middle-class and elites, who believe that the system can still be fixed if Trump is forced to quit. They don’t see it that Trump exactly, and very nakedly, represents all sort of evils begotten by the US ruling classes.

These elites and privileged American middle-class and converted elite immigrants, purely for their class status, fail to see that the US-led massacres and plunders over the world since time immemorial cannot be purified using the holy water of libertarianism anymore. The US ruling classes want blood, Charlottesville gives them blood and they will keep on promoting more Charlottesville type incidents to consolidate and strengthen the rule of big corporations.

It’s upon the most downtrodden and exploited masses of the US society, the working class, the poor immigrants, the people of colour, the Muslims and Jews who are despised by the fascist war mongers, the Mexican workers, the handful of aboriginal people, to unite today against the terror and the oppression laden on them by the US ruling classes through its nefarious corporate appeasement policies and by the fascist stormtroopers like the Ku Klux Klan, Neo-Nazis and other white supremacist fascist organisations. It’s their united militant struggle, which, powered by the people’s struggle against the US imperialist agenda in all over the world, will ensure the hastening of the doom of the US imperialist enterprise and its fascist lapdogs. Only through such broad class struggles can the US working class and the poor, people of colour and oppressed communities end the rule of fascist tyranny on them and stop more men and women like Heather Heyer from being mowed down by any fascist apparatchik.