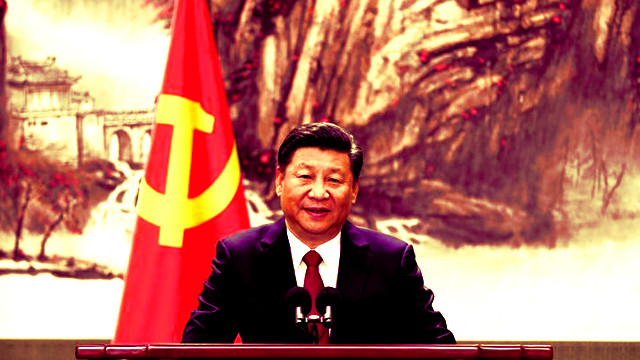 The Communist Party of China recently concluded its 19th National Congress, where it adopted, for the first time after Mao Zedong, a guiding ideology that is called “thought” and is accredited to a  living leader – Xi Jinping, the General Secretary of the CPC and the President of the People’s Republic of China. The adoption of “Xi Jinping Thought on Socialism with Chinese Characteristics for a New Era” is a paradigm shift in the hitherto followed policy of the Chinese Communist Party since 1978, under which it claims that it considers -: Marxism-Leninism, Mao Zedong Thought, Deng Xiaoping Theory, The Theory of Three Represents, The Theory of Scientific Outlook on Development, as its guiding ideology and none among them other than Mao Zedong Thought is an ideology named after an individual during their lifetime. The attempt by the CPC to install the Xi Jinping Thought as an official ideology during the lifetime of Xi shows that the incumbent general secretary is reluctant to lose his stature and cult built in the last five years through a sham campaign against corruption in the Chinese society and government. There is an unconfirmed report that the CPC general secretary can go ahead and assume the title of “Chairman” which was dissolved after Hua Guofeng’s brief tenure as the party’s ‘helmsman’ after the demise of Mao Zedong in 1976. Hua was instrumental in purging the left-wing Gang of Four and transiting power peacefully to Deng Xiaoping and his accomplices. The efforts taken by Xi Jinping to elevate himself as a Chairman is propelled due to his desire to develop a strong cult followership around himself and secure an official position in the party and the government even after his two-term general secretary’s tenure is over.

Though Xi Jinping’s ambitions may come under fire from his competitors within the party, the politburo standing committee members and the old hawks like Jiang Zemin and Hua Jintao may not allow the rising aspirations of the incumbent leader to go unopposed, because under the same rules these hawks and yesteryear leaders were forced out from the power centre due to their age. If Xi becomes the chairman of the party and derive legitimacy to rule the country and lead the party unchallenged, using his cult, it will change the dynamics of the internal power strife of the party to a more violent one and can even spell doom for the capitalist system running under the guise of “socialism with Chinese characteristics” that Deng Xiaoping so carefully built by negating the socialist policies of Mao Zedong and his comrades. As Xi Jinping is using his own name to peddle the anti-communist, anti-Marxist theory, thereby he is also going against the policy set by Deng Xiaoping that usurped the credit of the development of a particular theory of Marxism-Leninism from the genius of the particular revolutionary and turn it into a collective output. Like Deng Xiaoping and his accomplices, after usurping power following the collapse of Hua Guofeng’s rule, defined Mao Zedong’s Thought or Mao Zedong Thought as the political theory developed by integrating the universal truth of Marxism-Leninism with the peculiar condition of China by the “collective wisdom” of the first generation of the CPC leadership with “Mao Zedong as its core” – a carefully drafted verbiage designed to ensure that Mao Zedong’s personal genius behind the development of Mao Zedong Thought, which happened to be the highest development of Marxism-Leninism, is negated and it’s turned into a Chinese version of Marxism, thereby making it a “local” political ideology sans any international significance, which means a direct stabbing in the back of the worldwide revolutionary struggle carried on under the banner of Mao Zedong’s thoughts. However, when Xi Jinping is propagating his own line as “Xi Jinping Thought on Socialism with Chinese Characteristics for a New Era,” he will either have to conclude it as a collective theory, i.e. share the credit of developing the theory and the political power with others, probably the politburo members, or call it exclusively a personally-developed theory and thereby consolidate power in his own hand and share the booty with only very few chosen people. In both ways, he cannot befool the majority of the Chinese people, who are better acquainted with Marxism-Leninism and Mao Zedong Thought and consider this regime and the renegade CPC as brutal weapons of capitalist dictatorship wrapped in crimson packaging.

Mao Zedong had shown years ago, citing the teachings of Lenin, that the contradiction between the capitalists and the working class does not end after the establishment of socialism, or the dictatorship of the proletariat in a country, but it intensifies to a newer level. Mao Zedong showed that the experience of Soviet Union, where capitalism was restored after the death of Joseph Stalin, teaches that the contradiction between the bourgeoisie and the proletariats intensifies in the wake of the latter seizing the state power and establishing socialism. As socialism doesn’t automatically replace the commodity production system, especially small-scale commodity production system that breeds bourgeoisie – overnight, therefore, the bourgeoisie aspire to seize the power back and reverse the victories of socialism by establishing capitalism. Therefore, Mao Zedong advocated that the communists must wage an uncompromising and untiring struggle against the disposed capitalist class and prevent them from usurping power and under socialism the contradiction between the ruling working class and the remnants of the bourgeoisie aspiring a role-reversal becomes the principal contradiction in the society and it remains so until the entire imperialist system is destroyed all over the world. But the Chinese Communist Party’s Dengist camp always opposed this theory while playing their role as the turncoat imperialist agents within the party; they kept propagating that the principal contradiction in the society is “between the people’s aspiration for a better life and the constraints of the productive forces” and thereby proposed that the production be increased, maximised and done on a larger scale without placing any sort of emphasis on the task of politically motivating the working class and peasantry, moulding them into a revolutionary form. This is why, when the camp of Liu Shaoqi and Deng Xiaoping usurped the power of the CPC and government of China after the Eighth National Congress of the CPC, Mao Zedong and his comrades like Lin Biao started the revolutionary struggle of the working class to overthrow the proxy rule of the capitalists, famously known in the world as Great Proletarian Cultural Revolution or simply the Cultural Revolution, a revolution of the super-structure, which overthrew the dictatorial rule of Liu Shaoqi and Deng Xiaoping and reestablished the rule of the proletariat.

The revolutionary intensity of the Cultural Revolution, the potential of the working class, aroused by the political theory of Mao Zedong’s Thought, which overthrew the headquarters of Liu Shaoqi and reestablished the strong rule of the working class and its revolutionary appeal that still incites the working class of China to take on the Dengist leadership, are some of the major reasons why the Cultural Revolution and the Ninth National Congress of the CPC are still loathed by the present Chinese Communist Party’s renegade leadership and their sycophants, who keep on warning the people of China that any attempt to restart such a movement will end up into a nationwide chaos. Following the mysterious killing of Lin Biao in 1971 and encirclement of Mao Zedong by Zhou Enlai and his accomplices in 1973, Deng Xiaoping returned from his exile and started usurping state and party power by reinstating his accomplices and manoeuvred Mao’s moves to contain his nefarious designs. But Mao’s efforts to rejig the system and initiate another round of revolution from 1975 onwards failed, as both Hua Guofeng and the Gang of Four, comprising Mao’s estranged wife Jiang Qing, her comrades: Zhang Chunqiao, Yao Wenyuan and Wang Hongwen, fought incessantly for power among themselves and thereby broadened the scope of Deng Xiaoping to usurp power by weaning over a major part of the Chinese People’s Liberation Army. Until now the Chinese Communist Party’s leadership shudders at the thought of the resurrection of any Cultural Revolution-type movement in China and thereby dismantled the Marxist-Leninist education system of party cadres and kept them devoid of revolutionary political theories of Mao Zedong. They have filled the leadership positions of the CPC with their sycophants who despise revolution and worships money and self-aggrandizement to nullify the possibility of any revolutionary upsurge.

By countering the teachings of Mao Zedong, which laid stress on revolutionary moulding of the working class and peasantry in the post-revolutionary society to ensure that the people’s aim is in sync with the aim of the communist party, i.e. the establishment of a classless society- communism, the Dengist party kept emphasising on preserving traditional orders, imposed moratorium on political education of the working class and protected the interests of the capitalist classes. Though China developed rapidly on the capitalist path in the last three decades since it embraced the US-prescribed neo-liberal economic system, the socio-economic disconnection of the poor happened rapidly and the working class was stripped of its previous power and ruling status. The working class is transformed into destitute and the Chinese peasants are forced to live a life of semi-starvation and pauperisation like the pre-revolutionary days in China. The development of the capitalist system gave rise to the oligarchy of the bureaucratic capitalists, represented by the Chinese Communist Party’s top leadership, who seized control of all major state enterprises, which were sold at a throwaway price to the foreign corporations and these oligarchs also command extreme loyalty of the most powerful officers of the People’s Liberation Army. They are the new emperors of China and they legitimise their oligarchy by repressing the people and their aspirations for a socialist China. They bring forth revisionist doctrines like the toxic “Xi Jinping Theory” to thwart the revolutionary movements from brewing within the Chinese society and to divert the people’s attention by showcasing minor or non-existent contradictions as the principal contradiction, thereby thwarting any attempt by the people from recognising the actual principal contradiction, i.e. the contradiction between the proletariat class and the bourgeoisie.