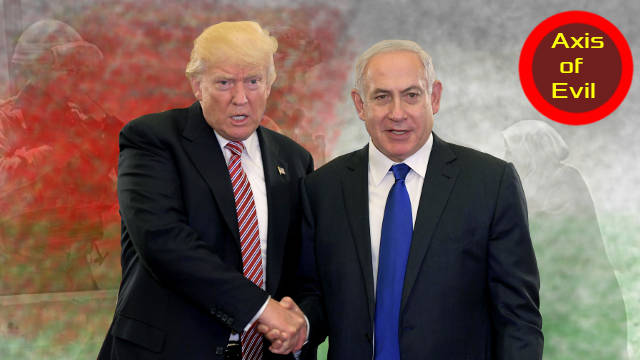 Donald Trump’s decision to shift the embassy of the US from Tel Aviv to Jerusalem of Palestine is an act that carries a lot of hidden attributes than what’s apparently visible under the sun. The fascist regime of Donald Trump, which is running superfluous with unhindered love for its strongest lackey and watchdog in Middle-East Asia – the Zionist Israel, is trying to kill a lot of birds with a single pebble by this move of embassy shifting.

A close and detailed analysis of the move of embassy shifting will unveil larger conspiracies that lie underneath the layers and sublayers of the agenda, which was supposed to benefit the US and its running dogs in the Middle-East.

By making public its decision of relocating the embassy of the US from Tel Aviv to Jerusalem, the Trump administration played a trump card to divert the attention of the people around the world to the crisis that was to unfold in Palestine and the Muslim-majority countries, which evidently drew a lot of mainstream media attention and evidently the news of the significant victories achieved by the Syrian Arab Army in defeating the US-sponsored “moderate rebel” terrorists and the ISIS in its territory, where the Syrian government is close to a final victory, despite the US trying hard to overturn the war results, went off from air.

The people aren’t allowed by the mainstream media to see the end of the ISIS, which received extreme funding, weapon supply and other help from the CIA, the Zionist Israeli government, the Saudi Arabian monarchy, the Qatar monarchy and the fascist Turkish government led by Erdogan. The people aren’t told that the Syrian people, the friends of the Palestinian people, have defeated the pawns of the US imperialism with valour and vigour.

It’s very surprising that the US and its Western allies like the UK, France, Germany or other European powers didn’t find it worthy to highlight the massive victory achieved by the Syrian Arab Army, supported by the Russian air strikes, the Hezbollah and the Iranian government, in defeating and annihilating one of the dreadest terrorist-fascist organisation of the 21st century.

The US has actually spent a lot of taxpayers money to combat the ISIS on papers and in the TV, while the actual fund not only went to arm and enrich the reactionary powers like the Saudi Arabian rulers, the Qatar regime, the Turkish fascist regime of Erdogan and the Zionist Israeli regime but to also support and sustain the Salafist terror groups like ISIS, the Al Qaeda and their auxiliaries in the Syrian territory so that the US can occupy and rule Syria using a theocratic dictatorial model.

Recently, the devoted lackey and bootlicker of big US corporate capital and banks, Nikki Haley, who happens to be the demagogue the US has planted in the United Nations as an Ambassador, kept milling lies over a purported Iranian missile strike against the Wahhabi terror fountainhead- Saudi Arabian monarchy with a clear intention to build up massive xenophobia in the US against the Iranian government and also to legitimise the notorious arms deals that the US under the fascist Donald Trump regime is cutting with the Saudi Arabian monarchy.

The notorious warlords of Saudi Arabia, the loyal bootlickers of the US imperialism since decades and a close ally of the Zionist Israel, have bombed the poorest country of Middle-East, Yemen, since the last two years with an attempt to prevent the pro-Iranian forces from seizing and consolidating power in the civil war-torn country, which the Saudi Arabian monarchy wants to retain badly as a neo-colony for itself and its American masters. Since the last two years, the Saudi Arabian air strikes killed thousands of people, including numerous children.

A trade embargo imposed on Yemen is also fuelling hundreds of starvation deaths by intensifying food crisis in the economically ailing country. The Saudi government is on a genocide spree and the international community, the UN, the UNSC, etc., which would cry foul and take no time to condemn a foe of the US for reasons true or false, remains mute spectators.

The Iran-supported resistance against the Saudi Arabian occupation in Yemen has forced the US to invest more dollars in building and developing the armoury of the Saudi Arabian monarchy and it was the particular reason why Donald Trump, while dancing with the weird Saudi royals during his foreign tour to Riyadh, promised arming the monarchy up to the teeth to protect the American hegemony against the assertive coalition of Iran and Russia, which now aims to alter the geopolitics of Middle-East.

Through the Saudi Arabian warlords and reactionary terror-sponsors, the US is also trying to install a puppet regime by force in Lebanon and is keen to transform the liberal-democratic country into an absolute theocratic monarchy ruled by its running dogs like that of the Zionist Israeli regime or the reactionary Saudi monarchy.

The recent fiasco over the Premiere of Lebanon Saad Hariri going for a mysterious odyssey and spending some quality time with the Saudi Arabian rulers before returning to Beirut via Paris show that the Saudi-American-Israeli nexus is pushing all pawns they can to bring a political change in Lebanon and thereby deprive Iran-Russia-Syria of one of their crucial ally in the region.

Donald Trump’s fascist regime is now digging the bedrocks of the one of the oldest holy cities of the world to incite more violence and bloodbath and thereby distract the mass attention from the humiliating defeat of the US-NATO-Israel-Saudi nexus in the battle of Syria, where they funded and armed the ISIS and other auxiliary terrorist organisations for more than six years.

While Donald Trump and his cohorts can temporarily create a distraction from the fact and give the trigger-happy Zionist Israeli regime a good chance to hunt for Palestinian people agitating against the Zionist aggression on the Arab land, though they can legitimise the Jerusalem resolution of the Zionist government adopted in 1980, which said that “Jerusalem, complete and united, is the capital of Israel”, a doctrine that the UN rejected as unlawful, still the US government can’t change the fact that the democratic and progressive people of the world, including the Jews and Christians, consider Jerusalem as the rightful land of the Palestinian people. Under no condition, the people can give that land to the Zionist Israeli occupiers.

The US government may be successful in distracting the people by inciting trouble in Palestine by endorsing the Zionist occupation, but it cannot hide the fact that the US is losing its ground in the Middle East, with the rise of a new and strong Syria, which defeated its auxiliaries and appendages. The US and its lackeys are facing the strongest mass resistance in decades and this will not die down, rather intensify every day, making it impossible for the Zionist Israeli oppressors and their American masters to exist in the region.

The significant victory of the Syrian people against the evil axis of the US-NATO-Israel- Turkey and Saudi Arabia, the very axis which was trying to depose an anti-imperialist regime and install a puppet theological puppet rule, shows the world that the reactionary forces of the US, the Zionist Israel or Salafist terror-monger Saudi Arabia aren’t invincible and they can be defeated if they are fought resolutely, with valour and by following an uncompromising strategy.

Despite the Russian government trying to mild down the Syrian resistance struggle against the foreign terrorists funded by the US and its allies to serve its own imperialistic diplomatic purpose in the region, the Syrian people have shown magnificent outcome through their massive sacrifices and by displaying utmost courage in defending their land from the foreign aggressors.

As the Zionist Israeli forces are now keen to subjugate the already oppressed and apartheid-affected Palestinian people in Jerusalem and torture them to derive sadist pleasure and feed the Zionist ruling classes and the elite reactionaries who are thirsty of Palestinian blood, it’s a time that the Palestinian people take great lessons from the victory of the Syrian people and the Syrian Arab Army against the US-NATO-Israel-Saudi Arabia nexus and intensify their resistance and liberation struggle.

The US can’t get rid of the crisis it’s quagmire in throughout the world and especially in Middle-East Asia. The infallibility of its bootlickers like the Saudi monarchy and the Zionist Israeli regime is constantly challenged by the common people. The defeat of the US-led coalition in the battle of Syria, the annihilation of the CIA-Mossad and Saudi Arabia-funded terror organisation ISIS from the heartland of Syria and the vociferous protests throughout the Gulf against the US-Israel-Saudi Arabia nexus is proving that the unholy coalition of arch-reactionary monarchies and Zionist Israel is going to face strongest challenges in the coming days, especially as Syria and Iran will work as strong bastions against the forces of occupation. By raking up the issue of shifting their embassy from Tel Aviv to Jerusalem, Donald Trump can’t score victory anymore.