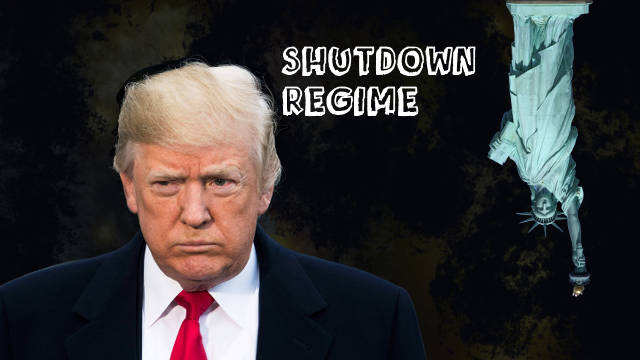 The United States federal government has shutdown after a bitter brick batting between the Republican and Democrat Senators over the passing of a stopgap budget that would finance the running of the Trump regime for few days. The federal shutdown, now called “Trump shutdown” was fuelled by the reluctance of the fascist lunatic Donald Trump regime to continue benefits for the 700,000 immigrant youth called “Dreamers” who were brought illegally by their parents to the US when they were children.

While 50 Senators voted in favour of the budget, the Trump regime felt short of 60 votes after the budget was approved by the House on Thursday. The Republican leader of the House, Mitch McConnell kept his anti-immigration racist position fixed and didn’t give in to the demands of the Democrats who are led by Chuck Schumer, a New York Democrat. The unprecedented shutdown of the federal regime caused immense chaos throughout the US as the federal services came to a halt. The famous Statue of Liberty saw a shutdown notice hanging at the entrance as the federal government staffs are been told to stay home for the next couple of days.

During a federal government shutdown, the federal employees are divided into two broad categories, essential and non-essential. The essential employees are forced to work for the military, air traffic, federal prisons, CIA, FBI, etc. and aren’t paid for their work during the period until the shutdown is over. The non-essential employees aren’t paid anything and are asked not to report to work until the shutdown is over. The last time the federal government went for a shutdown was in 2013, when it resulted into 120,000 fewer jobs, drop of economic growth by 0.2 to 0.3 per cent in a quarter and immense loss in tax collection.

Donald Trump experienced the shutdown one year to the day his racist-fascist regime was inaugurated. The fascist lunatic warmonger American dictator reached out to his jingoistic followers on Twitter, crying foul and claiming that the shutdown was a Democrat gift on the anniversary of his presidency. The Democrats, on the other hand, blamed the Trump regime and said that the shutdown is caused due to the adamant nature of the fascist government even when it has a majority in the House, the Senate and the White House. The Democrats blamed the Trump regime for being extremely zealot in dealing with the problem of immigration.

Throughout Saturday and Sunday, the Trump regime kept ringing phones and tried to carry out a track-II diplomacy with the Democrats by wooing Chuck Schumer into accepting the deals that Trump can throw in return of their support to pass a budget to run the federal government and pay its employees, armed forces and intelligence agencies. The closing down of the entire mercenary network of the US fascists will not be tolerated even by the big banks and corporations that run the presidency of whoever wins, as it will stop them from exploiting super-profits for themselves from the neo and semi-colonies using the threat of American aggression as a bullying tactic.

As the present federal government shutdown shows no sign of improvement despite a lot of discussion between the Republicans and the Democrats, it’s signalling that the economic repercussions of this shutdown will be mammoth and it will be a shock for the already ailing American ruling class. The Democrats are trying to use the opportunity to rake up support for themselves by fishing in the murky water, while Trump is planning to get more Republicans in the Senate in the 2018 election by exploiting the crisis of the federal government shutdown and throw its blame on the Democrats. However, the American working class and poor will suffer as benefits will be drastically cut to control the budget deficit.

The US economy is quagmire in a severe crisis as the big corporations and banks, owned by 1 per cent of the American population who owns nearly 90 per cent of the wealth and resources, are not finding a suitable bubble like the dot-com bubble of the late 1990s, the mortgage bubble of the 2000s and the real estate bubble to have their capital parked in highly speculative game and reap rich benefits from their investment in a short period of time. As their capital remains idle, locked and stashed, they fear for the future and look desperately for any possible avenue to multiply the money.

The American ruling classes have a huge portion of their money invested to strengthen the terrorist forces like the ISIS that the CIA raised under the Obama regime to destabilise Syria and create a virtual enemy that can be used to scare the American and world population, like the Wahhabi-Zionist-CIA once conceived the Al Qaeda to hoodwink the people. Such terror outfits and their terrorist activities provide the American ruling classes with an opportunity to increase defence budget and help the military-industrial complex, owned by big corporations and banks, to reap super-profit from war and bloodshed.

However, unlike in the past, the joint efforts of the US imperialism, the Zionist Israel and the Wahhabi Saudi Arabia to wrest control of Syria by toppling its legitimate government failed due to the vehemence showed by the Syrian Arab Army, the Russian Airforce and Iran-backed Hezbollah in driving out those terrorists. A long-drawn war in which the US lost considerably and failed in its effort to Balkanise Syria and Iraq to create a Kurdish state in lines of Zionist Israel became an Albatross around the neck of the American ruling class and their European allies. They see no hope to quickly multiply their initial investment in the war theatre.

They lost a huge investment in the Syrian war and now they are seriously facing a crisis while attempting to overcome those loses. At present, nothing except BitCoin mining has the speculative seduction that can promise to multiply their money quickly and thus all of these imperialist “coupon-clipping capitalists” are trying their luck in the internet currency market, which is manifesting the general course of the crisis of capitalism and signalling it becoming severe in the course of time.

The Trump regime is the brutal but real face of the US imperialism, which is now unable to achieve its global imperialist goals due to the weakening of the dollar, the overall crisis of capitalist production, distribution and it’s unable to curtail the rise of people’s discontent at home and in its neo-colonies against its misrule. This inability to contain the rise of discontent through the quasi-democratic and liberal faces has forced the big corporations and the banks to have their own man, a fascist bully Donald Trump to rise to power and distract the people, especially the working class by spreading vitriol against Muslims, immigrants and Afro-American people. The racist fascism is giving as much dividend the US ruling class expected as Trump remains the most ridiculed man on earth.

All talks of mutually solving the crisis of the federal government shutdown is a mockery that the US ruling classes are using to hoodwink the people. The worry expressed by the mainstream, corporate media in the US aren’t concern about the people or the immigrants, rather they are the concerns of the cunning section of the reactionary American capitalists who want to ensure that the situation at home remains peaceful and the violence can be exported to countries like DPR Korea (North Korea) or Iran to draw the people’s attention there. They are concerned about the immense loss the tax exchequer will bear and the fall in the GDP growth.

The fascist Donald Trump regime’s failure to resolve the impasse with Chuck Schumer-led Democrats is an ominous indication about the heightening of the contradiction between the two dominant camps of reactionary imperialists who rule the US in turns. The inability to resolve the federal government shutdown is also a signal that to cover up the immense crisis the Donald Trump regime will keep using the obnoxious racist doctrine as its guiding ideology and will not consider the repercussions they may have at home, especially when the White Supremacists are forced to retreat everywhere by the Anti-Fascist movements of the communists.

This federal government shutdown will not end the global hegemony of the US imperialism right at this point of time, as America lacks a genuine and strong working class struggle aimed at seizing power from the 1 per cent rich. Until a revolutionary struggle is undertaken by uniting all anti-fascist forces in the American society to seize power by overthrowing the criminal-fascist rule of the tyrant Donald Trump and his sycophants, it will be quite impossible to turn the favourable objective conditions like the present one to destroy the evil US imperialism and its empire.