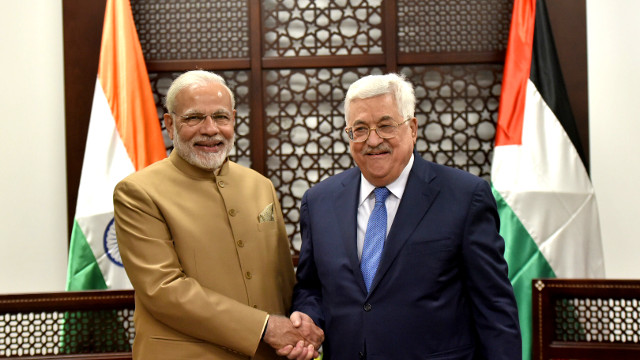 The recent visit of Narendra Modi to Palestine made headlines around the globe, especially, when Mahmoud Abbas, the head of the Palestinian National Authority awarded Narendra Modi the “Grand Collar of the State of Palestine” – the highest civilian award of the state. This visit of Narendra Modi, within a month of hosting the Zionist Israeli terrorist chieftain Benjamin Netanyahu in New Delhi, is seen as an attempt to dehyphenate the India-Palestine relations from Israel and vice versa. Coming out of the shell of Non-Alignment Movement, Narendra Modi and his coterie is pushing forward the pragmatic agenda of business first. The Government of India signed deals worth $50 million with the Palestinian authority, among which $30 million will be used to build a multi-speciality hospital in Beit Sahour.

For onlookers, this visit by Narendra Modi will look like an attempt to show the world that Palestine is not forgotten and despite the growing saffronisation of Indian politics, despite the Hindutva camp’s incessant barraging of slurs against Muslims and its hobnobbing with the Zionist Israeli regime, the Indian government still stands alongside Palestine and has delinked its relation with Palestine from its independent relationship with any third party, including the Zionist Israel. The effort of Narendra Modi to portray himself as a balancing leader and a pragmatic diplomat has been successful in the Middle-East and at home, his sycophants, the Eminence Grises from the RSS and its affiliates are leaving no stone unturned to showcase Modi government as a very neutral and progressive regime that India ever had.

Palestine and Narendra Modi or the Hindutva camp cannot be bracketed together due to the inherent antagonistic contradiction between them. The Hindutva camp has always stood by the Zionist Israeli occupation of Palestinian land and the promotion of Judaism as a nation and all Jews as one people. The founders of the Hindutva fascist ideology, like M.S. Golwalkar or V.D. Savarkar, on one hand, supported the persecution of the Jews by the Nazis, on the other hand, they supported the formation of a nation-state for the Jews according to the Balfour declaration by driving out the majority of Palestinian Arabs from their homeland. As a part of the deeply anti-Muslim, anti-democratic, pro-Zionist and pro-imperialist bloc, it’s abnormal for Narendra Modi or his cohorts to support, in deed and even in words, the cause of Palestinian independence.

Rather, the history is a witness that the Hindutva fascist bloc of India always stood by the side of the Zionist regime of Israel and their common American masters during each and every conflict between the Zionist occupiers, powered by the US military and diplomatic assistance, and the Palestinian people who received wholehearted support from the anti-imperialist and democratic bloc of the world. The Hindutva camp cheered American fascist ringleader Donald Trump’s declaration of considering East Jerusalem a part of the very “single and united” Jerusalem that the Zionists consider as the capital of their country and thereby shifting the US embassy from Tel Aviv to Jerusalem. Though Indian envoy at the UN voted against the US in the UNGA on the notorious decision of the Trump regime, it wasn’t driven by the ideology of supporting the cause of Palestine, rather gaining more access to the Arab markets and receiving more foreign investment in Indian infrastructure and other sectors from the rich Gulf countries have driven the decision to oppose the Trump regime in the most pacifist tone. Trump or the American fascist regime headed by him wouldn’t mind Narendra Modi-led government’s small gestures of diplomatic protest until the time the US has full license to plunder Indian resources and exploit Indian labour.

Then why Narendra Modi had to go to Palestine during his three-country Arab tour? When Narendra Modi doesn’t have a Muslim or progressive, anti-imperialist or democratic support base, then why he went to Palestine and met Abbas, which the BJP would otherwise consider as the politics of Muslim appeasement if done by its bete noir Congress? Why there was a need to sign treaties worth meagre $50 million with the Palestinian Authority and why did Narendra Modi visit the mausoleum of Yasser Arafat, the former President of Palestinian Authority and a famous chief of the Palestinian Liberation Organisation’s Fatah faction?

The answers to these questions can be found in the complex and volatile geopolitical realities of the Middle-East Asia, where the iron-strong grip of the US is loosening since the defeat of the West-backed terrorists in the war with Syria. Earlier, the US had an absolute hegemony in mediating between the Zionist Israeli regime, which acts as a lackey of Washington in Middle-East Asia, and the Palestinian people represented by the Fatah faction of the PLO. By sabotaging the liberation struggle of the Palestinian people through immoral compromises with the Zionist regime and their American handlers, the Yasser Arafat-led Fatah faction of the PLO had actually sold-off the Palestinian interests to the US and the Zionist regime since the signing of the Oslo Accord in 1993. Arafat and Abbas won international recognition only when they switched their allegiance towards Pentagon and its Zionist lackeys following the collapse of the Soviet Union.

Now that the Zionist regime is in peace with Mahmoud Abbas, whom more than 100 countries consider the sole representative of the Palestinian people, the common people of Palestine, living in Gaza strip, West Bank and other areas are literally angered against the puppet government for its inability to support, save and fight for them. The government of Abbas is a corrupt organisation that lacks the will and the determination to lead the Palestinian people towards their greater goal of uniting the Palestinian land by punishing the Zionist aggressors. Unlike the PFLP, Hamas and other militant organisations fighting for the freedom of Palestine, the government of Abbas has been instrumental in curbing of Palestinian resistance against Zionist Israel under the pretext of maintaining law & order and saving the right of Israel to “peacefully exist” with Palestine. Behind the scenes, alike in India and Palestine, the threads of Mahmoud Abbas and his faction of Fatah are controlled by the American rulers and the CIA.

Narendra Modi didn’t visit any revolutionary Palestinian leader fighting a war of liberation, rather he met the man who is managing the show of hoodwinking the broad masses of Palestine as well as the people of the world who support the cause of Palestinian liberation. Mahmoud Abbas, on the other hand, didn’t meet a man who is a die-hard supporter of the Palestinian independence, rather a crook businessman who is trying to exploit the sentiments prevalent in Palestine and the Middle-East in favour of its independence to foray into the economy of the Middle East and carve a niche for itself. The meagre investment of $50 million is done to ensure that using this bait more Arab capital is lured into India and Indian comprador capital is allowed concessions in the Arab monarchies around Palestine. This meeting and the visit of Narendra Modi wasn’t an independent act of building diplomatic ties, rather a very well-thought business trip, the idea for which is conceived by the US and its lackeys in the power-corridors of India and was endorsed by the Zionist Israeli partners of the Hindutva camp long back.

The inbuilt conspiracies in diplomatic agendas can’t be simply hidden with rhetoric. When Narendra Modi, with Mahmoud Abbas by his side, said:“I have once again reassured President Abbas that India is committed to upholding the interests of the Palestinian people. India hopes for an early realisation of a sovereign, independent state of Palestine, living in an environment of peace.” He carefully omitted two keywords important for Palestinian cause as per the diplomatic standpoint of India – “viable” and “united” – the words that are used to define the Palestinian state that India wants to see – a sovereign, united and viable independent state of Palestine. By dropping these crucial standpoints of the Indian government, by not recognising the Hamas-controlled Gaza as an integral part of the Palestinian people, by not mentioning East Jerusalem as the capital of the independent Palestinian state, Narendra Modi ensured that he plays by the rules set by the US imperialism and the Zionist Israeli regime. Narendra Modi made clear that all India wants right now, in the realpolitik of Middle-East Asia, is the domination of the Saudi Arab-Israel nexus under the command of the US and a status-quo in Palestine, which will be allowed to be gulped by the Zionists through force.

Despite trumpeting his regime’s so-called support for the Palestinian people, Narendra Modi hides the fact that the Indian government is right now the largest importer of Zionist Israeli weapons in the world. By giving billions of dollars to the Netanyahu-led Zionist terrorist regime, his government has empowered them to butcher the men, women and children of Palestine with impunity. India’s trade partnership and military alignment with the US and the Zionist Israel will help the enemies of the Palestinian independence to consolidate their hegemony and occupation over Palestine. More than $2 billion is going from India to the coffers of the Zionist killers and despite the bear hugs of Mahmoud Abbas and the highest civilian award of Palestine, this money will shed more blood of Palestinian people. The Indian ruling classes, their political-bureaucratic-military clique, of which Narendra Modi and the Hindutva camp are an integral part, their cultural wing – the Bollywood, etc. are deeply entangled in a large-scale conspiracy to colonise the Arab land by the Zionist-American-Wahhabi forces.

Palestinian people can’t rely on the mass murderers and oppressors for their goal of liberation from the Zionist Israeli occupation, especially on the ruling classes of India who colonise and oppress the people of Kashmir the same way the Zionist Israeli regime colonises the Palestinians. Their independence will not come through the US-controlled “multi-layered” diplomatic discussion with the Zionist occupiers, as Mahmoud Abbas dreams. Rather, they can achieve their salvation by intensifying their anti-colonial struggle against the Zionist Israeli regime and its American supporters with an uncompromising zeal to achieve their goal of a free, united, secular and socialist Palestine. Narendra Modi and other agents of the US imperialism and the Zionist colonialists won’t be able to alter the future through their prolonged conspiracies and attempts to fool the people with stunts; history will surely obliterate these reactionary forces in the course of its revolutionary development and progress.