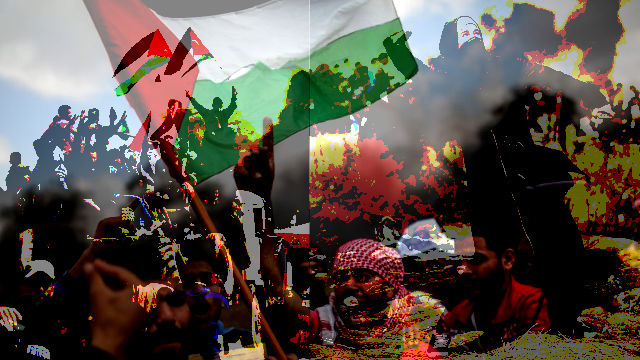 The world mutely looks upon as the US-puppet state Zionist Israel carried out brutal massacre of more than 60 Palestinian protesters in Gaza, who have been protesting against the occupation of Palestine by the Zionist aggressors since 1948. The Great March of Return saw its seventh Friday of protests, where the Israeli snipers shot to kill and maim protesters and fired volleys of rockets on them. The Great March of Return, which began on 30 March, ends on 15 May, was organised to oppose the forcible occupation of the Palestinian land by the Zionist regime 70 years ago, during 1948-49. Through their fierce resistance struggles, the Palestinian people of Gaza showed that despite Zionist regime’s fortification of their homeland, despite decades of strong state-violence against them, despite their forcible eviction from their houses and despite the wholehearted support of the American imperialism and its Arab puppets behind the Zionist terrorist state of Israel, their resistance will see no die-down and Palestinian people will not at all wait for 70 more years for the resolution of the occupation of their land.

It’s not that the Zionist Israeli forces fired tear gas shell at adults only, the coward IDF commanded by the Zionist terrorist kingpin Benjamin Netanyahu also killed little children as young as eight year old. Laila Anwar Ghandour was merely an eight month old little baby girl who was killed during the tear gas shelling on her parents in Gaza by the Zionist terrorists. The hospitals of Gaza, which itself is in a dilapidated state, faced a huge crisis when more than 2,000 casualties arrived at each of them. The Hamas, which is a militant Islamist organisation of Palestinian resistance, limited themselves in rhetoric only over avenging the Zionist forces and seeked unity of the very Arab monarchies that are helping the Zionist regime of Netanyahu to please Donald Trump and his fascist American regime. The Popular Front for the Liberation of Palestine, a left-wing progressive organisation, is attempting to build up strong militant mass struggle for the liberation of the Palestinian land from the terrorist Zionist forces.

In its brutal suppression of the Palestinian resistance in Gaza and feeding it to the common Israeli settlers in a form of entertainment to create a generation of zealots and bigots who’d rally behind their pursuit of imperialist domination on Middle East Asia on behalf of the US imperialism, the Zionist Israeli regime has become an enemy of the world mankind and its actions, which are clearly genocidal and surpasses the barbaric nature of Nazi Germany, demand a total military and economic blockade by extension of the scope of BDS movement. Though there are a large number of countries that have not recognised the Zionist Israeli state, the American pressure on most neo-colonial countries like India, makes the ruling classes of these countries seek close tie-ups with the genocidal regime, often going against the collective sentiment of the progressive people of their own countries.

The recent spurt in violence against activists in Gaza is triggered by a panic-stricken Zionist ruling class to draw support in favour of Zionist occupation ruler Benjamin Netanyahu and Donald Trump, his patron in the US, both of whom are facing corruption allegations and are subjected to scrutiny and investigation by their own regimes. The American fallacy is that the national sentiment of the people has gone against Donald Trump and his fascist war monger policies, which aim at destabilising Iran to strengthen the Zionist Israeli and Wahhabi-Salafi Saudi nexus in the Middle East, the total Balkanization of Syria by toppling the government of Bashar al-Assad, and to establish Jerusalem as the official capital of the Zionist Israeli state, by mocking the UN resolution against the move.

Both Netanyahu and Trump are constantly feeding xenophobia to their core votebank, the elite and middle-class chauvinists who are supportive of genocide and are driven by Islamophobia, by hyping their anti-Muslim sentiments, while at the same time helping the Saudi Arabian monarchy to consolidate its position as a chieftain of Salafi terrorism spread through a plethora of organisations that have roots in the CIA and the Mossad, these two principal enemies of world mankind have ensured that they can cover-up their personal corruption cases and divert the mass attention towards Gaza by intensifying violence on the justice seeking people of Palestine.

Under the pretext of “securing its safety”, the Zionist Israeli regime launched incessant attacks on Iranian bases in Syria and tried to annex further territory in addition to the Golan Heights that’s already under Zionist occupation. The international community, the UN security council or no other so-called champions of peace and freedom didn’t condemn the brutal and heinous aggression of Zionist Israel on Syria last week; even Russia, an ally of Syria in its fight against the West and US-funded terrorist forces, remained a mere phrase monger when one of its allies, the Zionist Israeli regime, was complicit in a crime of aggression against its another ally. The Russian call for peace and observation of international ethics were mere token protests, while in reality the Russian government is too complicit in the Zionist Israeli crimes against Syria and against the Palestinian people. In reality, there is no single big power that’s going to align with either Syria or the people of Palestine because of the huge amount of trade and commerce ties they have with the US and the Zionist Israeli regime. Money, at the end of the day, plays the supreme role of conscience-forgiver and hence, for the sake of trade and commerce, the present world is enjoying the optics of gory violence in Gaza.

Since 1948, the Zionist Israeli regime is killing the innocent Palestinian people to consolidate their rule on the land that belongs to the Arab people, Muslims, Christians and non-Zionist Jews. The Zionist aggression has killed numerous people so far and alike the imperialist warmonger America, the Zionist Israeli regime plays a crucial imperialist role in the entire Middle-East Asia. Guarded by the US and acting as a military launchpad of Pentagon, the Zionist Israeli regime has the audacity to attack any country, kill their people and annex their territory to found the greater Zion. The big bankers and corporate tycoons of the US, the UK, France, Germany and Russia are paying billions of dollars to their Zionist lackeys and are also directing their respective governments to adhere to pro-Zionist policies on the foreign policy pursuit.

The Palestinian people, the people living in the occupied Jerusalem, the capital of Palestine, the people of Gaza, the people of West Bank and all Palestinians scattered around the Middle East Asia must not rely upon the help of the foreign powers for their cause of salvation. No force on earth will take on the Zionist forces and liberate the Palestinian land for them. A collective assault by the Syrian and Iranian governments on the Zionist terrorists of Tel Aviv looks like a distant possibility as these powers are trying to win the international community towards themselves in their pursuit to protect themselves from an imminent American-Israeli-Saudi aggression under any new pretext. The American fear or lordship will keep other powers at bay from helping the Palestinian people against the Zionist violence, while in the meantime, the Zionist terrorists will massacre many hundred thousands with impunity and use the gory atrocities to fuel flames of jingoism amongst the core supporters of the Zionist system. Thus, in the entire world, armed with a strong mass support, the Palestinian people have to fight their own struggle for salvation relying on their own strength and by adopting a strategy and likewise tactics that can inflict maximum pain upon the Zionist terrorist regime and its American handlers.

Only under a strong, reliable, progressive and democratic resistance leadership, the Palestinians can properly wage their struggle for liberation from the Zionist colonial occupation and only through perseverance in their protracted liberation struggle, they can defeat the American imperialism and its Zionist puppets with greater force and thereby, dig the grave of imperialist oppression in Middle-East Asia forever.