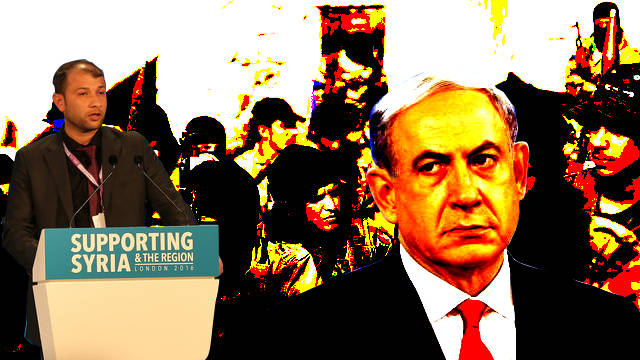 The White Helmets or the Syrian Civil Defence, a quasi-terrorist organisation funded by the US–NATO–Saudi–Israeli clique in their bid to overthrow the government of Bashar al-Assad in Syria, recently returned to news headlines again, not for their theatrics to build up support for the Western imperialist cause against Syria, but when they were evacuated by the Zionist Israeli regime from Southwestern Syria, which is on the verge of liberation from the US-NATO-Saudi-Israel nexus-funded terrorist groups.

It’s reported that the US and Canada requested the Zionist terrorist regime of Benjamin Netanyahu to rescue the Wahhabi-Salafist terrorists and their proxy agents, the White Helmets, from Southwestern Syria, where the Syrian Arab Army, supported by the Russian Air Force and the Hezbollah, is marching towards its decisive victory in liberating the last patches of land from the Zionist-Wahhabi occupiers. The US administration, the CIA and the Mossad are worried that the capture of the White Helmet operatives, who were so far portrayed as peace-loving “humanitarian activists” by the Western corporate-controlled media, will help the Syrian Government and the Russian Government to expose the heinous criminal conspiracy hatched by Washington DC and its running dogs to Balkanise Syria.

According to news reports, nearly 800 White Helmet men, including ISIS and al-Qaeda terrorists were evacuated by the Zionist Israeli regime when the US and Canadian head of states contacted the mass murderer and war criminal Benjamin Netanyahu and ordered him to carry out the evacuation plan. Benjamin Netanyahu himself tweeted and told the real story behind the Zionist Israeli role in the evacuation.

Several days ago President Trump contacted me, as did Canadian Prime Minister Trudeau and others, and requested that we assist in evacuating hundreds of White Helmets from Syria. These are people who have saved lives and whose lives were in danger.

Netanyahu also tweeted that the Zionist Israeli terrorists will keep fuelling sectarian violence and terrorism in Syria through its pawns like the US-funded ISIS and other terrorist organisations. The “threat of Iran” was highlighted by the megalomaniac and paedophile Zionist leader whose forces are constantly massacring Palestinian people to occupy their land and build illegal settlements. The call of violence by Benjamin Netanyahu wasn’t condemned by the American-puppet United Nations or any other international body. The Zionist warlord remained aloof from international condemnation as usual, while the Western media badmouthed Bashar al-Assad for fighting against the ISIS and al-Qaeda operatives.

Therefore, I approved their passage through Israel to additional countries, as an important humanitarian gesture.

Concurrently, we will not stop taking action in Syria against Iran’s attempts to establish a military presence there.

The US and the Western imperialist powers plan to settle these 800 White Helmets members and their families first in the UK, Germany and Canada, then they have plans to use the Zionist Israeli secret service and its military support to evacuate more terrorists from Southwestern Syria using the “humanitarian” tag to avoid international scrutiny. According to the imperialist corporate media, nearly 300 terrorists are still trapped in Southwest Syria and the West is using its clout on the Zionist Israeli rulers to hasten their evacuation too. It’s doubted that the Syrian Arab Army may create roadblocks in the evacuation plan, hence, most of the Western imperialist powers, including Erdogan regime of Turkey are trying to persuade Russia to neutralise any Syrian offensive.

Very predictably, the Syrian Government condemned the evacuation of these fake humanitarian workers who are actually ISIS and al-Nusra operatives by the Zionist Israel through the Golan Heights, an occupied part of Syria. The evacuation of these associates of terrorists funded by the US and its imperialist allies has sabotaged the scope of interrogating and exposing the crimes of these war criminals who are known mostly for helping terrorists kill men, children and rape women.

Ever since the US-led imperialist powers like the UK, France, Germany and regional hawks like the Zionist Israel, Wahhabi Saudi Arabia, Jordan and Qatar joined the evil conspiracy to topple the Ba’ath Socialist Party-led Syrian Government, the White Helmets came into the battlefield of a war-torn Syria, which fought for seven long years against West-backed terrorists; one of the unique struggle for sovereignty waged by a Middle-East Asian country, which also happens to be one of the last officially secular countries in the region. The White Helmets is a group of terrorist proxies who worked closely with US and NATO-funded al-Qaeda unit called al-Nusra and supported the genocide-monger Jihadists in their reactionary battle against the Syrian Government.

In the guise of helping a “non-government” organisation doing “humanitarian” work, the US has continued to fund the White Helmets through the CIA to aid the growth of the ISIS and the al-Qaeda/al-Nusra terrorists in Syria. An old estimate calculates the total payment that the US has given to the White Helmet, which is $23 million from taxpayers’ money, the UK has paid nearly £4.5 million and the Danish government has paid €4 million to the White Helmets.  All these money was given in the name of humanitarian aid to an organisation that claimed they rescue people trapped in “government bombardment”. Numerous exposures show that these operatives are neither connected with the official Syrian organisation responsible for civil defence nor are they humanitarian workers in any sense.

Being the apple of the eyes of the Western mainstream corporate media, an industry that wants Bashar al-Assad and his secular government to be replaced with an anti-people, reactionary Wahhabi regime that would help the US and its allies to Balkanise Syria, the White Helmets enjoyed a lot of good press coverage in the West and the major news organisations, owned by big corporations and banks, carried out extensive marketing propaganda to project these proxy terrorists as aid workers.

Not only did the media houses, including the giant wire service provider, Reuters, sent their celebrity photojournalists there to do photo ops with the White Helmet activists, who would perform good theatrics showcasing their rescue efforts and the same content would be sold for millions of dollars by these media houses to the gullible common news subscribers throughout the world with a clear intention to malign the government of Bashar al-Assad with heinous propaganda, while whitewashing the crimes committed by the terrorists funded by the West.

Whenever the anti-imperialist forces, who are often labelled as “conspiracy theorists” by the CIA and its lackeys, exposed the White Helmets since 2014, especially after the Russian government entered into the war theatre in support of Bashar al-Assad, the mainstream corporate media went frenzy to defend the proxy terrorist organisation. The so-called “neutral” newspaper, The Guardian published a long story last December in support of these proxies of the al-Qaeda and ISIS to whitewash their crimes. From New York Times to BBC, everyone happens to be a staunch fan of the White Helmets and they seem to be united in preserving the carefully manufactured image of these freelance terrorists on the payroll of the US, Zionist Israel and Wahhabi Saudi Arabia.

By projecting the White Helmets and other progeny of the CIA-manufactured terrorist industry as “humanitarian” organisations, by carrying out slanderous campaigns against the legitimate government of Syria and by sabotaging its war against terrorism and sectarianism, the US, the UK, Germany, France and other Western powers, their Zionist Israeli and Wahhabi Saudi Arabian lackeys showed who are actually creating, nurturing, harbouring and helping terrorist organisations to multiply.

Through its evacuation campaign, the Zionist Israeli terrorist IDF may have managed to secure the terrorist White Helmets from being nabbed and interrogated by the Government of Syria, they have made the White Helmets turn into an object of global mockery and rebuke by officially involving Tel Aviv as its saviour. The clear scene of a nexus between the Zionist terrorists and those fighting for “humanitarian” cause in Syria shows whose money was running the show so far and why the White Helmets are equally condemnable like the ISIS or the al-Qaeda.

Every day, the Syrian Arab Army progresses significantly against the terrorists sponsored by the US and its allies, which is creating a new history in the Middle-East and raising new hopes against the hitherto dominant US-Saudi-Israel nexus that has ruled the region with violence and treachery so far. The fleeing of the White Helmets, the proxy terrorists and the panic in the Western camp shows that the future of Middle-East and its complex problems will not take the turn that Washington-London-Tel Aviv-Riyadh would want, it will take the course that the people of Middle-East want and that will certainly be the end of imperialist domination in the region. Let the real nexus of evil shudder in panic.