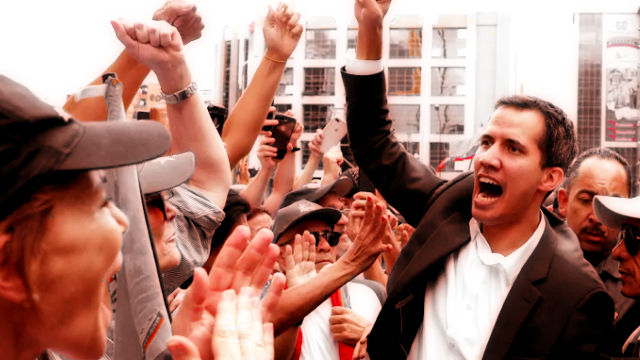 The western corporate-controlled mainstream media will never cease to amuse in its attempt to dupe people and brainwash them with selective propaganda. Recently, the New York Times gave a full-page op-ed to Juan Guaidó, Donald Trump’s minion and the self-proclaimed “president” of Venezuela. Guaidó wrote about his plan to wean a section of the army to initiate a coup d’état against the legitimate president of Venezuela Nicolás Maduro to bring to fruition the “regime change” scheme with “minimum bloodshed and pain”.

It’s not an easy job for an obscure person to find space in an elite newspaper like the New York Times, forget getting a column to share an opinion. Without being a journalist, columnist, writer or anything worth a column but the leader of a marginalised far-right CIA-funded party of Venezuela, Guaidó managed to have himself published in the New York Times and it’s not surprising to anyone who knows the newspaper’s political standpoint.

Drumming the CIA’s observation, the New York Times’s editorial line has been accusing Donald Trump of manipulating the 2016 presidential election with purported Russian support. The irony is, the same New York Times is supporting a man who is trying to usurp power in his own country through a coup d’état with the help of a foreign imperialist power — led by the very Donald Trump whom the New York Times considers a usurper — and it’s providing an op-ed space to that man without a second thought! Probably it’s the tragedy of irony as well.

Actually, it’s not an unprecedented thing to find one of the US’s newspaper joining its government’s chorus over a “regime change” in a foreign country. Rather, history is a witness to the fact that the US’s corporate-controlled mainstream media houses have always supported their government’s imperialist ambitions by campaigning on their behalf.

Hence, we can see the hysteria spread by the likes of the New York Times, Wall Street Journal, Washington Times, CNN, Fox, etc. during the Cold War, during US invasion of Iraq, Yugoslavia, Afghanistan, Libya, Syria, Ukraine, etc. to build up a support base for the imperialist campaigns of the US ruling classes. Venezuela isn’t different.

While they do it again afresh, they didn’t renew their old dialogues that had been used in other countries at different points in time. They reiterate the same old clichéd jargons of “restoring democracy”, “giving freedom to the people”, “neutralising threat to peace”, “bringing justice and equality”, etc., in the case of Venezuela too. It looks like propaganda from Cuban campaigns or vitriol against North Korea (DPRK) are exactly copied and pasted to Venezuelan columns.

In a detailed article that walks through the lanes of history and traces the rise of Guaidó, who was known to less than one among five Venezuelans before Donald Trump anointed him as a “president” of their country, independent media portal Grayzone exposed the nexus that actually propelled the political career of the man whom both Republicans and Democrats (US), Tories and Liberal Democrats (UK), Christian Democrats and Social Democrats (Germany), liberals and fascists (France), etc. are supporting with enthusiasm. It shows with detailed information how Guaidó was created by Mike Pence for Donald Trump’s Venezuela mission.

Quite explicitly, the imperialist powers have thrown their hats in support of the neo-con supported by the US’s giant petroleum corporations, the National Endowment for Democracy Foundation, the CIA’s USAID organisation, and the exiled Venezuelan oligarchs trying to regain control over their country’s nationalised economy. The US president has employed a notorious war criminal, convicted liar and a crook Elliott Abrams as the special envoy for Venezuela, and he is trying to build up support for a military intervention in the oil-rich Latin American country whose economy is ruined by draconian US sanctions and CIA espionage since last few years.

As Venezuelans cope with a major food crisis, shortage of medicines, essential commodities and sky-rocketing inflation caused by the US sanctions and their government’s non-diversification of the economy that kept the economy shackled in the confinement of oil exports only, the US government has clearly spoken its mind — money and goods will flow only if Guaidó is perched on the pinnacle of state power. The Venezuelans will get relief only if they allow the US to forcefully topple their government and flush away their sovereignty.

Military aggression is becoming imperative for the Trump regime in Venezuela as the street protests and Luddite violence aren’t providing the required thrust to intensify the “regime change” scheme. Guaidó didn’t mince any word to declare that he and his coterie are trying to utilise all resources — especially US dollars — to wean away a section of the army to their side and use “bloodshed” to seize power.

Due to a sheer lack of popular support, despite instigating thousands of poor slum dwellers, who have been suffering due to the economic crisis in Venezuela, to take up arms against the government, Guaidó can’t see the recreation of a “Maidan Revolution” of Ukraine in Venezuela now. The propaganda of the US and its imperialist allies and puppets over Venezuela is combatted by a host of alternative media organisations and a large number of US people are unwilling to believe Trump-Pence-Pompeo clique over Venezuela now.

Isolated at home and outside, the fascist neo-liberal economic agent Guaidó has no option left but to try and build up international support for his “cause” by identifying it as one of “restoring democracy” and “saving people” from a despot. The New York Times and a host of other imperialist media houses are happily providing him that space and opportunity to build up a propaganda campaign by reaching out to those who read such reactionary newspapers and believe the blatant lies propagated through them.

The self-styled flag-bearers of neutrality and conscience, newspapers like the New York Times can’t dare to invite Maduro to write his views on the scenario and the threat of a coup or military intervention that looms large on his government. The reason is evident; the New York Times is merely an agent of the US imperialist enterprise and its only reason to exist is to promote the cause of its imperialist masters and shareholders.

Such mainstream media houses are here to justify imperialist wars, bombings on civilians of a sovereign country and creation of large-scale humanitarian crisis because their editorial board members will not have to die starving or live with the fear of being bombed by an American bomber. The New York Times will justify violence and aggression on Venezuela because its owner AG Sulzberger and his clan do not live in the middle of a warzone.

Thus, the New York Times and their comrades, who provide a lap-dancing opportunity to the likes of Guaidó, stand naked under the bright sun of truth now. Such pieces of toady and servile journalism that help imperialist powers with an opportunity of bloodshed and mayhem must sink and sink fast for the sake of humanity.