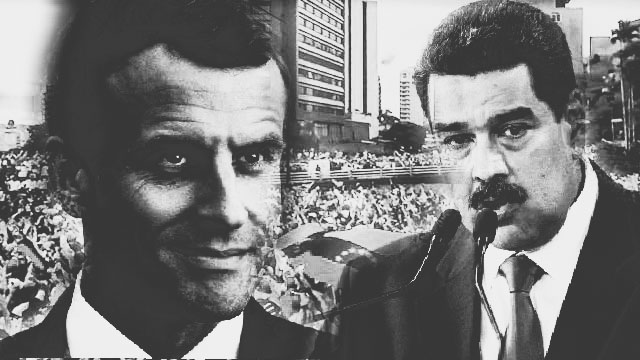 For the 13th consecutive weekend, protesters came out in thousands on the streets of France and in capital Paris on 9 February 2019, demanding the ouster of the despotic tyrant Emmanuel Macron, who is running one of the most totalitarian and corrupt regimes in Europe.

As thousands of protesters, called the Yellow Vests due to their attire that consists of drivers’ emergency vest,  descended on the streets of France, raising their fists and slogans against the dictator Macron, the latter’s regime unleashed a series of macabre atrocities to suppress this people’s genuine outburst.

Lobbing of tear gas shells at protesters, shooting of pellets and rubber bullets, lobbing grenades and baton charge continued unabated from the police’s end. One protester even lost his fingers due to a grenade attack by the anti-riot police near the parliament building on 9 February.

Despite gory atrocities committed by the police, the Yellow Vest protesters bravely resisted and counter attacked them to avenge the fascist assaults. Many policemen were injured too, bearing the marks of the people’s anger against their heinous servility towards the dictator Macron.

The Yellow Vest protests started in November 2018, when drivers started protesting against Macron regime’s imposition of high fuel taxes by wearing their yellow vests. They demanded an end to high taxes on fuel and later raised anti-austerity and anti-liberalisation demands as well.

This movement grew spontaneously at an epidemic proportion and by December, thousands started rallying on the streets of France, especially in Paris, exhibiting their discontent regarding Macron regime’s anti-people policies.

A visibly panicked Macron and his utmost corrupt sycophants cited the presence of a handful of fascists and alt-right activists of neo-Nazi Marine Le Pen‘s organisation in these rallies, who the protesters are calling government moles, to legitimise the use of brutal state violence against the protesters.

The majority of the protesters have joined the movement spontaneously and remained aloof from political arm twisting and resisted attempts by different parliamentary parties to usurp the leadership of one of the largest mass protests in France after the students and youth movement of the late 1960s. They, however, expressed solidarity with trade union movements and marched unitedly against the anti-people regime with left wing trade union activists.

However, many fascists have been planted within the movement to discredit it by the Macron regime, which is helped by the Le Pen, who is finding promising political dividend in this movement. Anti-immigrant slogans were raised by few, but they were outnumbered by the radical anti-imperialist, anti-austerity and anti-fascists from the various hues of left.

The favourable coverage that the Yellow Vest protesters are getting from Russian state-sponsored alt-right media outlets like Sputnik or RT, also helped the French ruling classes to paint the whole movement as a Russia-sponsored political activity and fan xenophobia among French petty bourgeoisie. They tried to discredit the valour of the common people against the brutal regime by calling the participants “Russian agents”.

Hundreds of protesters are severely wounded in the macabre police violence; more than 20 people have lost their eyesight totally or partially due to indiscriminate pellet and rubber bullet firing by the police since December 2018.

Outside Paris, the police even ransacked houses, carried out arson and resorted to vandalism to blame the Yellow Vest protesters. Police firing has killed one protester so far and many of the protesters are illegally detained by violating their fundamental human rights.

The United Nations, the US government, the European Union and different human rights organisations are maintaining absolute silence on the issue of gross human rights abuse by the French dictator’s regime. None of them condemned the regime; none asked for an ouster of Macron for crimes against humanity. May be because he’s white, pro-American, lives within the World Bank and IMF-built economic ecosystem and loves the EU.

Thus, it’s not surprising that most of the top western mainstream media houses and their lackeys in Asia-Africa-Latin America didn’t cover these weekend rallies or present a proper two-side view of the complex political crisis that has matured in France.

Most of these big corporate-controlled mainstream media outlets have stopped covering the French protests actively since January 2019 to focus more on the Venezuelan protests, which have active support and funding of the CIA.

Ever since the CIA’s lackey Juan Guaidó was anointed as the president of Venezuela by the US President Donald Trump, the mainstream press has been showing the story of Venezuela’s opposition rallies against the legitimate president Nicolás Maduro and calling them signs of people’s resentment demanding a “regime change”. Ironically, the French Yellow Vest protest rallies are simply law and order issue for them.

It’s been done with the agenda of vilifying the legitimate government of Maduro so that garnering support for military aggression on Venezuela becomes easier for the Trump regime. We have seen how, by unashamedly joining the league with the notorious CIA and fascist neo-Nazi Trump, the self-styled champion of “free press” — New York Times — gave its opinion column space to a CIA puppet like Juan Guaidó so that he can build up support for an American military aggression on Venezuela.

This naked hypocrisy of the mainstream media, which is maintaining its sham neutrality regarding the brutal assaults on the Yellow Vest protesters by the reactionary Macron regime, but vilifying the legitimate government of Maduro, shows how much filth the corporate-controlled media has accumulated in its closet.

Their vehement opposition to protests against Macron, yet their love for a CIA-sponsored coup d’etat in Latin America show that it’s crucial for the cause of truth that the common people are aroused against these entities that survive on tickled down benefits from their corporate masters. It’s time to boot out corporate-controlled mainstream media.

The massive uprising of the Yellow Vest protesters in France demands the focus of the people’s alternative media as this is the fight for people’s democratic rights and freedom, it’s a battle between French imperialism, supported by global imperialism headed by the Wall Street-based corporations and military-industrial complex, and the majority of French people — the working class and the petty bourgeoisie — who are affected by the pro-corporate austerity policies, high taxes and cut down on social securities and pensions.

While the mainstream media will amplify its campaign against Maduro in Venezuela, the people’s media must support the majority of the French people against the despotic Macron regime and help in strengthening people’s movement to overthrow the megalomaniac despot Macron and his coterie just like the notorious French monarchy was overthrown in the historic French Revolution.

Millions of descendants of Voltaire and Rousseau are on the streets of France today, the very streets where great battles of democracy and republicanism were fought.

The new history of France, the antidote to the US’s war conspiracies in Venezuela, is now been written on the streets of France, where the oppressed people are gathering en masse to bring down the Macron regime. We must laud them, support them and highlight their achievements at each step of their march against tyrant Macron and his imperialist backers like EU and the US.