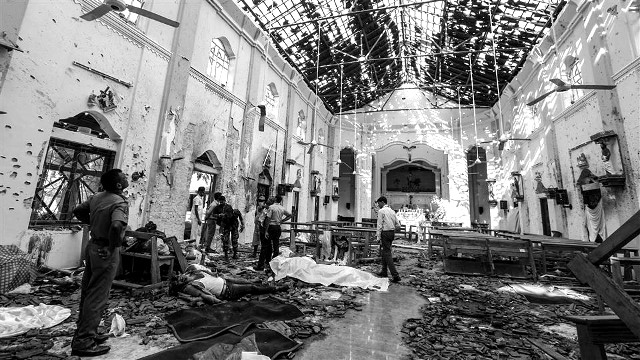 The Easter Sunday bombings in Sri Lanka on 21 April 2019 literally shook the conscience of people of the small island nation and the whole world. After a long time, Sri Lanka made to the headlines for all the wrong reasons. According to the government, 310 victims are killed, more than 500 are injured and many are missing. This happens to be one of the most horrific attacks targeting civilians and tourists in Sri Lanka after the three-decade-old Tamil rebellion for a separate homeland fought by the Liberation Tigers of Tamil Eelam (LTTE) was brutally suppressed by the former president Mahinda Rajapaksa’s totalitarian regime.

Sri Lanka has experienced a lot of macabre bloodsheds in the form of ethnic genocides, and communal pogroms for decades. The ruling classes of Sri Lanka never blinked their eyes before butchering hundreds of thousands of hapless Tamils in the past. It was the LTTE that first implemented the concept of “suicide bomber”, which was epidemically replicated in terrorist acts throughout the world; however, despite all such gory incidents, the Easter Sunday bombings allegedly committed by a little-known Islamist terrorist organisation — National Thowheeth Jama’ath — is something quite new for the entire island. This gruesome crime signals the beginning of a new series of violence and bloodbath in the communally polarised and divided island nation.

Whose interests are the National Thowheeth Jama’ath men fulfilling? Whom are they serving? Are these blasts result of the international jihadi influence, which motivated the perpetrators to commit such a heinous crime? Health Minister Rajitha Senaratne, who was briefing the press, claimed that 40 suspects are detained by the security forces and the investigation is underway. Senaratne claimed that the National Thowheeth Jama’ath couldn’t have executed such a well concerted terrorist attack in multiple locations without foreign assistance. Which country or which terrorist group he is blaming isn’t clear, however, it’s clear that the security forces will pursue the case from the angle fixed by the government.

How well Sri Lankan security forces and investigating agencies will resolve the case and how fair will be the process are matters of speculation. The Sri Lankan state machinery is notorious for its human rights violation and is accused of committing genocide to wipe out more than 140,000 Tamil people throughout Jaffna and northern Sri Lanka during the civil war with utmost impunity. With a newly-found enemy — the Muslims — it’s expected that these forces will help the ruling classes fuel the extensive Islamophobic narrative of Sri Lanka under siege of Muslim aggression during the politically crucial hour, as the presidential election is scheduled later this year and the general election is scheduled in 2020.

Christians, Muslims and Hindus are the persecuted religious minority groups in Sri Lanka, where the state only recognises Sinhala Theravada Buddhism as the sole official religion, relegating these minority communities to second class citizenship sans any fundamental rights and subject to severe state repression whenever they demand socio-economic justice or equal rights.

The Tamils, irrespective of their religion, were severely persecuted by the state during the LTTE-led freedom struggle. The ruling classes were able to split the Tamil community into antagonistic communal camps by rupturing the unity that existed between Hindu and Muslim Tamils. The communal antagonism between Hindu and Muslim Tamils led to the LTTE banishing more than 100,000 Tamil Muslims from its territory in the early 1990s. This communal division helped the Sri Lankan rulers to weaken the Tamil resistance for a long time.

After the LTTE was wiped out and a Tamil genocide was carried out by the Sri Lankan Army in 2009, the state machinery was keen to find out an “other” identity — a punching bag — that can help it intensify sectarian and ethnic polarisation. The state picked up the Muslims, who are 10% of the island’s population, for the purpose,  and the Christians were next. Since the time of Rajapaksa, the Sri Lankan ruling clique financed Buddhist fascist terrorism, tempered in extreme Islamophobia and hatred for Christians, to stir up violent pogroms against minority communities.

Buddhist fascists under the banner of Bodu Bala Sena, a feral gang of thugs supported by Rajapaksa for his political gains, started a serial vitriolic campaign against the Muslims and Christians. The macabre atrocities committed against the minority Muslims during the 2018 Kandy pogrom, and the repeated attacks against the Christian community in different parts of the country, including a ghastly attack on a church when Palm Sunday was observed on 14 April 2019, are signs of this growing Buddhist fascist terrorist menace, which seeks inspiration from the macabre atrocities committed by the Buddhist fascists in Myanmar against the Rohingya Muslims. Though the government imposed a state of emergency during the Kandy pogrom to quell the violence, it actually gave freedom to the Buddhist terrorists and the state forces to persecute and repress the Muslims wherever they tried to resist the violence.

As the neighbouring superpower China and the aspirant superpower, India, are trying to wrest control of Sri Lanka, their influence on the Sri Lankan politics can be seen in each political crisis that unfolds. The constitutional crisis caused due to a rift between President Maithripala Sirisena and Prime Minister Ranil Wickremesinghe in 2018 was actually an outcome of the bitter power struggle between New Delhi and Beijing over the control of Sri Lanka due to the strategic importance of the island state in the Indian Ocean.

The Easter Sunday terror attacks will definitely help Wickremesinghe in his attempt to take Colombo back to New Delhi’s block. An Islamist threat to a Buddhist state in the south will also help the ruling BJP under Indian Prime Minister Narendra Modi in its home turf during a crucial election season. Modi has already used the Easter Sunday attacks in Sri Lanka to hype his own image as a crusader against terrorism during election rallies.

Wickremesinghe and Senaratne have indirectly criticised Sirisena for the security lapse by claiming that the Indian military intelligence agency R&AW, which is controlled by Modi’s office, had provided crucial information related to a terror strike by the Islamists 10 days before the incident. They claimed that Sirisena never passed the information to the concerned agencies to take any concrete step. The internal strife clearly indicates towards the attempt by one power block to oust another using the attacks as a subterfuge.

While these verbal volleys were fired at each other, the narrative around the National Thowheeth Jama’ath and its choice of victims are raising more doubts than answering any. Long before the Sri Lankan government accused the National Thowheeth Jama’ath, many prominent right-wingers in India had pointed out the Islamists jihadists as the culprit without any substantial evidence in the public domain. How did they do it? Mere speculation or they had the information before the Sri Lankan government? The Sri Lankan government suspended internet under the garb of preventing the flow of vitriolic bush telegraphs, but at the same time, it imposed an emergency, which gave immense power to the state to violate human rights. When the state sets a narrative against a community by blaming an organisation as being identical to that community, it’s already a dangerous situation for the human rights of the members of the community. The emergency will further worsen the situation.

Strongly imbibed in Salafist terrorist doctrine propagated by the very Saudi Arabian monarchy, which honoured Modi with their highest civilian award, the National Thowheeth Jama’ath didn’t start any movement to oppose the humiliation of the minority Muslims at the hands of the Bodu Bala Sena terrorists. It rather focused on building a puritan movement demanding a Shari’at law in Sri Lanka. It carried out acts of vandalism targeting the Buddhist relics earlier and its leaders, who had no mass following among the peace-loving Muslims of Sri Lanka, came to the forefront using hate speech against the non-Muslims. The feudal core of the organisation limited its reach within eastern parts of Sri Lanka, far from the urban epicentres. Throughout its existence, the National Thowheeth Jama’ath has helped the Sri Lankan ruling classes to project the Muslims in the darkest shades.

Though no clear information is provided by Senaratne or the government at the moment, it’s clear that even if the National Thowheeth Jama’ath has triggered the blasts, it didn’t do it on its own, however, following the diktats from foreign masters who have a profound interest in Sri Lanka. The choice of Roman Catholic churches and major hotels housing tourists show that the attackers wanted to hurt the economy and tried instigating violence between different minority communities in Sri Lanka so that the ruling classes can reap benefits from it. There was no narrative of Islamist resistance in this heinous crime, as the Christians themselves are a persecuted community like Muslims and Hindus in Sri Lanka.

If any interest is served here through the blasts, then it’s of the Islamophobic, reactionary right-wing’s. The serial blasts on Easter Sunday in Sri Lanka simply strengthened the political propaganda of the Islamophobic fascist camp globally that feeds on anti-Muslim hysteria wherever the Muslims are in minority. It did exactly what the al-Qaeda, the ISIS and other such CIA-funded terrorist Salafist organisations have done so far. They helped the Bodu Bala Sena directly to consolidate and polarise the Sinhala Buddhists before the crucial elections.

At a time when Sri Lanka is at the crossroads of a tug war over its control by regional powers, at a time when the current government is unleashing the neo-liberal economic juggernaut shamelessly to ensure an unbridled rule of big foreign capital and reactionary comprador classes over Sri Lanka’s economy, then the existence of organisations like National Thowheeth Jama’ath and the Bodu Bala Sena becomes imperative for the ruling classes. The Sri Lankan rulers, either belonging to the pro-China or the pro-India camp, will try to use Islamophobia to divide the unity of the common people at the grassroots, will split the workers from the workers and the peasants from the peasants to ensure an unchallenged hegemony of reactionary foreign capital, indigenous comprador capital and feudalism.

It’s time to unite the exploited and oppressed Christians, Muslims, Hindus and Sinhala Buddhists together in their greater struggle against the exploitation of their resources, land, labour and ports by the big foreign capital. It’s time for the Sri Lankan people to build up a strong and united front against the divisive agenda of western imperialism, its regional lackeys like India, and their indigenous collaborators. It’s time that the Sri Lankan people struggle for political freedom, economic freedom, social justice and equality. The more they will be able to wage a battle on these issues and consolidate their struggles, the more they will be able to defeat the conspiracies hatched by the wicked rulers, who perpetrate heinous crimes like the Easter Sunday bomb blasts through organisations like the National Thowheeth Jama’ath.