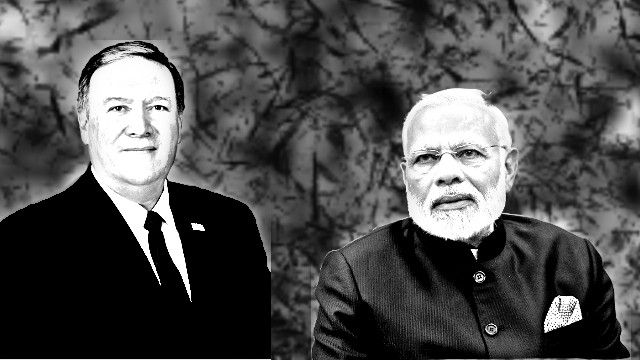 US secretary of state Mike Pompeo is visiting India with a basketful of offers to resolve the trade crisis that has ripened between two of the major world economies and also to convert India into a total satellite state of the US by cajoling New Delhi out of its existing trade relations with Russia, the arch-rival of the US in its quest for global imperialist hegemony. Though the US, especially the Donald Trump regime, considers India a “near ally” and is generous in selling high-grade military hardware and technology to it, there is still a trust deficit due to India’s reluctance to abruptly end its ties with Moscow, though India stopped importing oil from Iran and Venezuela following the US’s diktat.

Yet, to budge India, Trump is not shy in flexing the trade muscles. On 5 June 2019, Trump formally removed India from the list of beneficiary developing country for purposes of the Generalized System of Preferences (GSP) (19 U.S.C. 2461 et seq.). Trump accused India of not allowing the US corporations enough access to its markets and resources, though it’s mostly the US corporate entities that have kept the Indian market and raw material sources hostage. According to the Presidential decree: “Pursuant to section 502(d)(1) of the Trade Act of 1974, as amended (the “1974 Act”) (19 U.S.C. 2462(d)(1)), the President may withdraw, suspend, or limit the application of the duty-free treatment accorded under the GSP with respect to any beneficiary developing country.”

Though the Narendra Modi-led Bharatiya Janata Party’s (BJP) regime obliged the US’s diktat on ending oil imports from Iran, despite the huge benefits of credit facility and timely delivery from Tehran that the Indian companies enjoyed, and also on cutting oil imports from Venezuela, which is also on the radar of the US occupation programme, Washington DC has been pressing New Delhi for more, especially to ensure that the ties with Moscow are loosened and existing plans of India to buy S-300 air defence systems from Russia are scrapped.

As Indian rulers, who also serve Moscow in return of dimes, didn’t severe defence and trade ties following Trump’s diktat, the US government took the step of removing India from the GSP. The charge of India not allowing the US equitable and reasonable access to its markets and basic commodity resources is a false and subjective charge, as following the embracing of the neo-liberal economic regime by India, it’s the US which has benefitted the most.

The removal of India from the GSP may have only affected $190 million worth exports, however, it’s mostly the small and medium-scale export-oriented enterprises that have been hit. The collective anger of these industries against the US’s arbitrary action to end the duty-free imports got the government moving. After giving a meek response on the GSP ouster, the Modi regime finally mustered the courage to approach the issue half-heartedly. The Modi regime decided to impose long-pending retaliatory tariffs on 29 US products on 14 June 2019. Though this imposition of the tariffs on 29 US products is shown as a retaliatory step, however, it’s not so. The issue of imposing the tariff was as old as one year, since when the Indian government has been deliberating on the issue. It’s unlikely to affect the trade volume and the benefits that the US and its big corporations enjoy in India, and their exploitation of Indian resources and labour will continue unbridled.

Pompeo, who is showing the signs of the US government’s willingness to talk to India over trade, is actually not coming to India to resolve the deadlock created over Trump kicking out India from the GSP, rather, his endeavour is to secure the US’s tight grip over the policies made by the new Modi regime in terms of economy and military. Pentagon has already declared the Indo-Pacific a “priority theatre” and it’s going to use the region, in coalition with India, to build up a war theatre against Iran, China and the Democratic People’s Republic of Korea. Isolating the Chinese and Russian influence in the region is also one of the US’s goals, with which Indian expansionist Hindutva fascist regime finds complete resonance.

The Trump regime is determined to start an escalation over Iran in the next few days and having India on its side, apart from countries the Kingdom of Saudi Arabia and Zionist Israel, will be of added advantage. So far, the US has already started military adventurism targeting Iran, and India’s support, especially under the LEMOA, will become quite crucial in its mission to topple the government of Iran and install a Saudi Arabian-Zionist Israeli puppet regime in its place.

How will India react to a war situation in the Persian Gulf, how better India can help its master — the US imperialism — as a loyal lackey during a war, and how better India can micromanage the logistical support for the US troops and military installations in its territory will become crucial pointers for the US before it starts its Iran aggression with the support of the Zionist Israelis and the Wahhabi Saudi Arabs. The US knows well that Russia, which is continuously increasing its influence in the region, in association with China, will play an important role in case of an Iran war. Russia is one of the closest partners of Iran and has vested interests in the country. It’s likely that Moscow will arm Tehran to the teeth and support it indirectly to deal with the threat posed by the US-lead coalition against it. Pompeo wants Indian help in the forthcoming war and in return, he is going to promise India more US military support to reassert hegemony over the Indian Ocean to isolate China and wean away allies from it.

The entire tour of Pompeo will be centred around turning India into a neo-colony of the US from its existing semi-colonial status, and establishment of the US’s monopolistic hegemony over India’s politics, economy, diplomacy and military affairs as now that the Modi regime has got a second term and an absolute majority to change the country’s Constitution and make it an official protege of the US imperialism.

For the democratic, progressive, anti-fascist and anti-imperialist forces, the visit of Pompeo and his engagement with the Modi regime is a threat posed to India’s sovereignty and its independence in terms of foreign policy, which subsequent governments have gradually sold to the US and its allies. It’s time to protest against Pompeo, the imperialist scum, and his master, the megalomaniac dictator Trump, who are keen to subjugate the people of India under an unapologetic neo-colonial regime. To protect India from the US imperialism, it’s mandatory to fight against the tyrannical Hindutva fascist Modi regime, which is determined to sell the remnants of Indian sovereignty to Washington. Without defeating the Hindutva fascist camp and its corporate-feudal support base, it won’t be possible to thwart the conspiracies hatched by the Trump regime and executed by Pompeo’s India visit. The more the democratic and anti-imperialist forces delay taking action, the severe will be the consequences of a notorious US imperialist agenda.