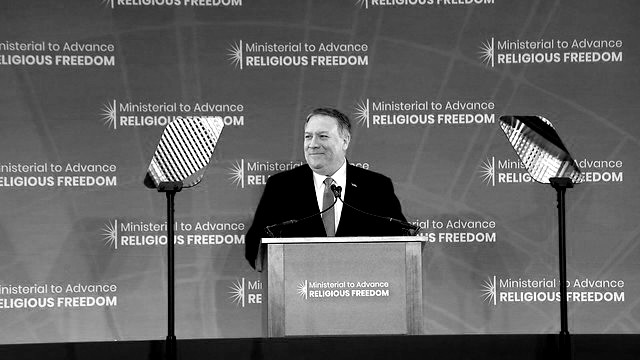 The United States of America has many names, from the land of dreams and hopes to the imperialist headquarters, each name serves an identity that the callers identify with. One of the names of the USA is the kingdom of hypocrisy. Nothing can do justice to this name than the recently-concluded second Ministerial to Advance Religious Freedom by the US State Department last week, and on Thursday, Secretary of State Mike Pompeo announced a new International Religious Freedom Alliance. Its mission will be to find ways to promote this most basic of human rights — religious freedom — and hold abusers accountable.

Though the name of the event and the new alliance sound quite fanciful at a time when the rise of fascism all over the world is threatening the religious freedom of minority groups, it’s a hollow and absolutely hypocritic move by the US. As a country that promotes bigotry all over the world, that backs the tyrannical regimes accused of human rights violations and communal discrimination, the US has the least right to play the role of a global policeman against the violation of human rights and religious rights of minority groups.

Pompeo is the last man to be the evangelist of religious freedom when he is complicit in heinous criminal conspiracies against the governments of foreign countries that refuse to be neo-colonies of the US. Donald Trump, the American bigot dictator, has already manifested his extreme racism and hatred against Muslims and non-white communities multiple times. His racist slurs against four Congresswomen has become a hot topic in US politics and polarised the society in racist camps. The attempt by Trump to showcase himself as a man concerned about persecuted religious minorities around the world is not an irony but a ridiculous gimmick. A little analysis of the list of attendees will eventually show the real scenario of this second Ministerial to Advance Religious Freedom and the International Religious Freedom Alliance.

While representatives of the persecuted Yazidis, Christians, etc, from the Middle East, were there in the meet, along with Rohingya Muslims of Myanmar, unsurprisingly there were none from the persecuted minority religious groups from the US’s vassal neo-colonial states and satellite states. We didn’t see the Palestinian Arab Muslims, who are killed, maimed and tortured every hour by the Zionist Israeli forces for their religious identity, participating in this event. We didn’t see Indian Muslims, lynched at the flash of eyes by Prime Minister Narendra Modi‘s Hindutva fascist followers belonging to the upper-caste Hindu society, participating in the event to narrate the gory incidents of atrocities the community has been suffering. None of the Indian Christians touted as “rice-bag converts” by Modi’s men, weren’t present to show the real situation of the community living under a constant threat, albeit in a lesser degree than the Muslims.

There was no one from Pakistani Ahmadiyya Muslim community, Shi’ite Muslims, Christians, Hindus and Sikhs, who face extreme violence and bigotry from the dominant majority Sunni Muslims. There was no Saudi Arabian Shi’ite Muslims there to tell Trump and his administration how the brutal Wahhabi monarchy supported by him torments and persecutes them. There were no British and American Muslims to tell the Trump administration that white-supremacist fascists are modern Ku-Klux Klan and they are the biggest threat to religious freedom in the western civilised world. No wonders, within few days of this event’s conclusion, a Hindu priest was attacked in New York’s Floral Park, whose attackers told him that it’s “my neighbourhood“, exposing the plight of religious minorities in Trump’s America, whose election was supported by the upper-caste Hindus led by billionaire Shalabh Kumar.

With the plethora of religious minorities, persecuted by the friends and lackeys of the US for their belief and identity missing, it’s quite obvious that those present, except some semi-colonies of the US like Bangladesh, were there to serve Washington DC’s long term geopolitical goals. Who were there to serve the US interests? The Tibetan Buddhists, who have been playing the role of CIA’s docile tool since last 70 years; the Uighyur Muslims of China’s northwestern province, who are made scapegoats by the US in its trade war and geopolitical game with the Asian giant; the Iranian Sunnis and some religious groups allegedly representing the interests of the religious minorities and persecuted communities in countries where the US wants effective “regime change”. The concern of the US government over religious freedom is confined only to those communities and countries where the governments are not American lackeys, where the US has strategic interests in “regime change” under some pretext; religious freedom is one.

Secretary Pompeo stated in Brussels in December 2019 that the United States is dedicated to building a liberal order that supports “institutions that work in American interests” and in the “service of our shared values” with allies and partners around the world. This means that only those cases of religious freedom will be hyped and made an issue, where the American interests will be served. So if an outdated blasphemy law is misused against persecuted lower-caste Christians and Hindus in Pakistan, if the Saudi Arabian Wahhabi monarchy is beheading people according to its whimsical fancy, if the British and American security agencies are torturing Muslims in secret chambers for their faith, if the Ukranian fascists are attacking Jews and Muslims, if the Palestinians are shot on head by Zionist terrorist Israeli forces, the US will neither be moved nor be concerned.

In this imperialist world order, where the US has an absolute hegemonic control over the planet, with only a few countries challenging its domination and the juggernaut of neo-liberal economy, globalisation and unbridled access to markets and resources, it will be infantile to expect the imperialist mafia cartel, led by an utmost fascist and racist president, to provide any relief or justice to the persecuted people of the world. Imperialism, especially US imperialism, is the root cause of most of the religious extremism brewing around the world, including the Islamist terrorism, Zionist terrorism, Buddhist extremism and Hindutva fascist terrorism.

From the early 20th century, the imperialist world order has promoted religious extremism and polarisation to divide the working class and the exploited people so that its hegemony and total grip on colonies and semi-colonies remain intact. From Zionism, Wahhabism to Hindutva, the imperialist warlords helped in drafting the ideological framework of all forms of religious fanaticism. From the Jimmy Carter administration’s time until Trump’s, Islamist terrorism has bolstered with the CIA’s support. Hindutva fascism, developed as an ideology under the British imperialism in colonial India, became quite a bestseller as an ideology since the time of Reagan administration for the US imperialism to directly sponsor and control. Religious persecution of minority communities reached an epidemic proportion under the aegis of the US imperialism all over the world since the 1980s.

The brutal genocides in the fragmented parts of former Yugoslavia, the genocide of Tutsis by the Hutus in Rwanda, the full-fledged war of occupation waged by the Zionist Israeli terrorists on the Palestinian territory, the US occupation of Afghanistan and Iraq, its support to the reactionary Tibetan Lamas, the American support to the Chechen terrorists to destabilise Russia, the American support to the Wahhabi Saudi Arabian monarchy in its war against Yemen, the Syrian war started by the CIA-sponsored jihadis, the support to the Hindutva fascists in India to brutally massacre Muslims and Christians, the list of imperialism’s crimes against mankind, especially in the domain of religious persecution, is a giant one, which is incessantly updated with one or the other crime.

To free the world from religious persecution of vulnerable minority groups in each country, to ensure an end to religious extremism, bigotry and communal violence, imperialism and the world system built by it on the basis of a network of colonies, neo-colonies and semi-colonies, must be demolished ruthlessly. Only by uprooting the US imperialism and its lackeys through people’s struggle for their national salvation in Asia-Africa-Latin America, it will be possible to put an end to the brutality of religious extremism and bigotry. Any talk of resolving the problem in the existence of the imperialist order with, the US imperialism at its helm, can be considered as sheer deceptive propaganda.

Imperialism is the harbinger and harnesser of religious intolerance, and with the end of the imperialist order, which can be brought only by a series of democratic, anti-colonial and anti-feudal people’s revolution in the countries of Asia-Africa-Latin America — the countryside of the world — it will be possible to develop an environment of peace and harmony between the working class, the toiled people in the places that are now called the bulwark of reaction and extremism. Those who are struggling for such a future system, are indeed doing an incredible job in making the world a liveable place by purging the filth of the present for the generations to come; while those who are moaning at the US’s religious freedom programmes, organised by the likes of Pompeo, are actually trying to fool the people and earn few sacks of silver from their imperialist masters. Despite their power, hegemonic control over resources and their utmost deceptive political propaganda, the US imperialism-led imperialist order can’t survive eternally by disrupting people’s unity. The wheel of history can’t be stopped indefinitely or turned back according to one’s fanciful wishes. Imperialism will suffer the ordeal of the people and religious extremism will definitely be put on the funeral pyre by the toiled people who were supposed to be its targets.