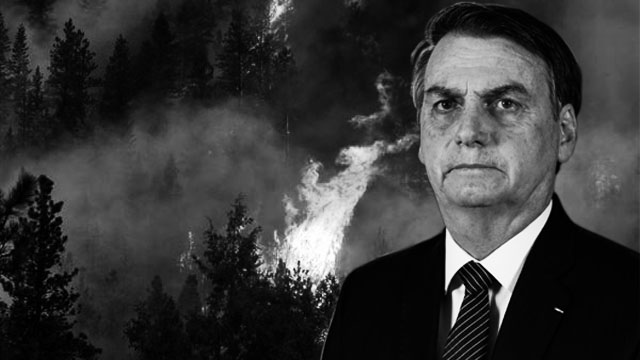 As gloomy black clouds hovered over São Paulo, the largest city of Brazil, on 19 August 2019, triggering a widespread panic among its 12m-plus residents, the fire in the Amazon rainforest started gaining popularity at an epidemic proportion on a global scale. It was no more ignored, no more swept under the carpet. Known as the lungs of the world, the Amazon rainforest, which encompasses 7m sq. km of the Amazon basin, with 5.5m sq. km of dense rainforest is spread over nine countries of South America, with 60% in the Brazilian territory and the rest in countries like Bolivia, Colombia, Ecuador, Paraguay, Peru, etc. It absorbs one billion tonnes of carbon dioxide every year and provides 20% of the world’s oxygen requirement. The wildfires in Amazon rainforest aren’t new and vast swathes of land that are deforested since the 1970s, bear the testimony that much of these fires are man-made. The greed of land for cultivation, forest resources like lumber, and the goal of exploiting the mineral resources that are hidden beneath the soil of this pristine forest drive the massive deforestation campaigns of the present time. The situation worsened with the rise of Brazilian fascist dictator Jair Bolsonaro.

Being an unapologetic admirer of the neo-liberal economic doctrine evangelised by the US, Bolsonaro strongly opposes the concept of climate change. He calls it a hoax and riding on an extremely xenophobic and right-wing demagogy, Bolsonaro not only managed to usurp power in Brazil last year with the support of the CIA and the US government under white-supremacist fascist Donald Trump – who too doesn’t believes in climate change – he is also pushing Brazil and the whole world towards a catastrophe by excessively peddling his obnoxious doctrine and deceitful propaganda that have captivated many gullible Brazilian minds.

After he was blamed for the Amazon forest fire, Bolsonaro blamed the NGOs in Brazil, whose funding he has cut, for starting the fire. He also blamed the old practice of burning forest land for cultivation by the farmers in the dry season. Yet, both of his claims came out to be sheer lies. Bolsonaro’s crackdown on the NGOs have left them powerless and moneyless in the country and they wouldn’t profit from setting the forests on fire. Even Bolsonaro couldn’t provide any evidence to back up his complaint. He said that he is expressing his doubt and not blaming the NGOs outrightly when the press asked him for evidence. Though the prevalent slash-and-burn agriculture practice is responsible for much of the Amazon rainforest’s destruction over the years, it’s unlikely to reach the huge proportion it has reached this year alone. The real reason is concealed by Bolsonaro for some obvious reasons. Many would call him the real reason and nothing else.

According to the Brazilian National Institute for Space Research (INPE), deforestation has increased manifold in July 2019 and forest fires increased 85% vis-a-vis 2018 as more than 75,000 incidents were recorded this year. This is caused by the patronage that Bolsonaro’s government has provided to the big feudal landlords and foreign corporations, who have been annexing the lands of indigenous communities of the Amazon. Though the feudal landlords, who encroach upon forestland, evict the indigenous communities and annex their land, have been ruling the territory as the de facto rulers since time immemorial, it’s under Bolsonaro that their clout increased manifold. They are now the government. Obviously, for the report by INPE, its head Ricardo Magnus Osório Galvão was fired by Bolsonaro, who claimed that the numbers were fake. He also fired 21 of 27 top executives of Ibama, the premiere environment protection agency of Brazil to show his love for deception rather than facts and figures.

Bolsonaro’s vision of deforesting the Amazon rainforest and using the land for large-scale cultivation of biodiesel plants, opening up of the forest’s protected land for mining of iron ore, oil and other mineral reserves, so that big American corporations can profiteer from it, and building  infrastructure to support large agriculture, animal farming and industrial setup have actually collectively contributed to the rapid increase in the Amazon forest fires in 2019. A large swath of forestland, even beyond the mandatory threshold for the existence of mankind, will be gradually handed over to the big oil and mining corporations of the US and Europe, the big landlords and local usurers, who are Bolsonaro’s paymasters, in case the dictator isn’t stopped by force. Bolsonaro has repeatedly declared his intention to reap extreme benefits from the exploitation of the Amazon forest’s reservoir of oil, minerals and its land for cultivation.

Before Bolsonaro’s rise to power, the Amazon forests came under attack from other Brazilian leaders as well. The government of the US puppet Dilma Rousseff sanctioned the construction of the Belo Monte Dam on the Xingu river, which is going to cause severe ecological damage to the Amazon forest. The Belo Monte Dam will be flooding an estimated 120,000 acres of rainforest in the Amazonian state of Pará, including part of the traditional homeland of the Kayapo Indians. Alike the demand for access to Amazon rainforest land, there has been a demand for the Belo Monte Dam as well by big corporate lobbyists and by overriding all resistance by her opponents, Rousseff approved the construction of the dam. The destruction that’s unleashed by Bolsonaro today has the groundwork done by the likes of Rousseff in the yesteryears.

Though there have been cosmetic protests against Bolsonaro’s anti-environmental attitude by western politicians on social media, especially French President Emmanuel Macron’s jab against the Brazilian dictator for acting indifferent to a problem, no real pressure will be built on the man who is a major puppet of the US imperialism in South America where the fascist Trump administration is eager to topple the Venezuelan and Cuban government with the logistical and diplomatic support of other states with the kind of Bolsonaros in power. This has emboldened Bolsonaro’s determination to get rid of the Amazon rainforest soon and transform the savannah into a fiefdom of corporate loot and plunder.

As the US oil giants now extract 230,293 barrels of crude oil from the Amazon region of Colombia, Ecuador and Peru with the help of the US’s puppet regimes in these countries, out of which 170,978 barrels of crude oil are refined in California itself, there is a huge stake involved in the oil that’s beneath the Brazilian Amazon, which hitherto remained out of the reach of the US imperialist sharks due to strong indigenous resistance and the government’s reluctance to handover the pristine forestland to corporates. With Bolsonaro, the equation is changing rapidly. Areas as big as New Delhi’s or Beijing’s middle-class neighbourhoods are deforested daily, while areas as big as London or Paris are deforested in a month. According to Diego Navarrete, a carbon specialist at the NGO The Nature Conservancy, carbon to the tune of 459 tonnes per hectare is released to the environment during deforestation in the Amazon every day.

Bolsonaro can’t claim immunity from criticism or international pressure to act against the Amazon forest fire right now by citing his sovereignty. The Amazon rainforests are not Brazil’s exclusive and sovereign territory but it’s also the lungs of the world. The old cunning thug may not be interested in protecting the environment as he has lived his life and is at its fag end, however, for billions on earth, who are fighting an uneven battle against climate change aggravated by corporate greed and lust, it’s imperative that the Brazilian, as well as the entire Latin American, Amazon rainforest area is protected from human and corporate aggression.

By arming his thugs to unleash a reign of terror against leftwing peasant unions fighting against the big landlords annexing indigenous community’s lands, Amazon forests and preserving the nature, the Bolsonaro regime is trying to hasten the annexation drive to provide a major profiteering venture to its corporate donors. However, as the landless peasants, the working class, the indigenous communities and the majority of the common people are uniting against the feral fascist juggernaut, the Bolsonaro regime will have to suffer severe setbacks in the days to come and will be forced to retreat by the anti-fascist forces. Still, the damages done by the forest fires are irreversible and can’t be undone by mere plantation of trees as they aren’t the replacement of real forests and their ecological value to the planet. Even though it can’t be reversed, it’d be better to stop this deforestation drive in the midway to ensure a healing touch to nature and allow the forest to regain its strength gradually. To stop this aggression, Bolsonaro must be booted out. It’s time to oust Bolsonaro and his coterie with the power of people’s struggle for a safe environment, justice, equality and peace. The more Bolsonaro holds on to power, the worse it will be for Brazil and the world.