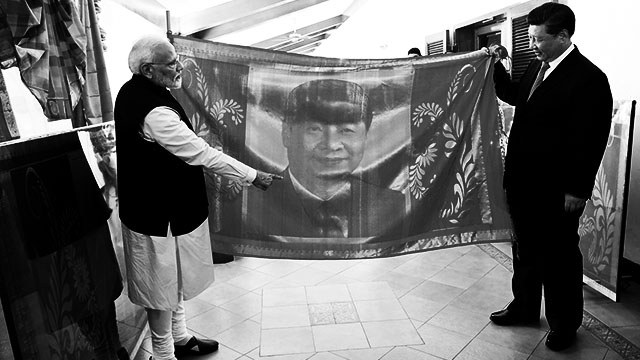 The second informal summit between Chinese President Xi Jinping and Indian Prime Minister Narendra Modi in Tamil Nadu’s Mamallapuram was much ado about nothing. Despite the fanfare and gala meals, this summit, alike the Wuhan informal summit of April 2018, failed to achieve anything credible because there was no concrete objective. This short, informal tour by Xi to India was actually a photo-ops show, where a Chinese president enjoyed a holiday at a beach town of India sponsored by the Indian taxpayers with their prime minister acting as a tour guide.

Due to this tour, both Mamallapuram and Chennai had to face traffic restrictions and eviction drives, which affected the lives and livelihood of thousands of unorganised workers, including the hawkers, street vendors, etc. Even the local fishermen were restricted from venturing out to the sea when the two top leaders were meeting.

Even after such a lavish ceremony, there was no concrete and remarkable outcome from the Mamallapuram summit. There was no concrete effort displayed to improve the Sino-Indian bilateral relations. The entire exercise, for which the Indian side spent millions on the arrangement, infrastructure development, and security, got no fruitful results except some PR exercise for Modi and his sycophants heaping praise on him for the unfruitful summit.

India’s formal annexation of the United Nations (UN)-recognised disputed territory Jammu & Kashmir through the abrogation of Article 370 of the Constitution and its bifurcation didn’t go well with Beijing. For China, the change of status quo in Jammu & Kashmir isn’t merely a challenge to its “all-weather ally” Pakistan, rather a challenge to its own position, as India claims that the Aksai Chin region, which is under Chinese control, is its integral part. To thwart Modi’s hyper-chauvinism over Jammu & Kashmir, China helped Pakistan to raise the Kashmir issue in the UN Security Council, after a gap of nearly 50 years.

China is also displeased over Him-Vijay, the Indian Army’s military exercise in Arunachal Pradesh, which it considers the southern part of Tibet Autonomous Region. India has historically claimed Arunachal Pradesh as its integral part following the British colonial-era maps. The Him-Vijay exercise has played a spoilsport in the Sino-Indian relations in the present circumstances.

China’s diplomatic approach towards India has been a two-pronged one, as India is one of the crucial markets for it and also a source of large investments. On one hand, Beijing doesn’t oppose the Pakistani position on the Jammu & Kashmir conflict to keep the China-Pakistan Economic Corridor project rolling on, while on the other hand, Beijing doesn’t let its relationship with Islamabad influence its relations with New Delhi.

This two-pronged approach helped China to swiftly swing the diplomatic pendulum between India and Pakistan in the aftermath of India’s formal annexation and bifurcation of Jammu & Kashmir.

“We are also working for Kashmiris to help them get their fundamental rights and justice. There should be a justified solution to the issue of Kashmir and China will stand by Pakistan for regional peace and stability,” Yao Jing, the Chinese Ambassador to Pakistan was quoted by Pakistan Today.

As this statement irked New Delhi, Chinese Foreign Ministry Spokesperson Geng Shuang told the press that China considers Jammu & Kashmir issue to be a bilateral issue between India and Pakistan.

Geng said during a press conference: “China’s position on the issue of Kashmir is consistent and clear. We call on India and Pakistan to step up dialogue on disputes including the Kashmir issue to enhance mutual trust and improve relations. It serves the common interests of both India and Pakistan and represents the shared expectation of regional countries and the international community.”

Just before Xi’s India visit, he met Pakistani Prime Minister Imran Khan in Beijing. Khan raised the issue of Jammu & Kashmir and allegations of gross human rights violations by India. On the Kashmir issue, the China-Pakistan joint statement reads: “The Chinese side responded that it was paying close attention to the current situation in Jammu & Kashmir and reiterated that the Kashmir issue is a dispute left from history, and should be properly and peacefully resolved based on the UN Charter, relevant UN Security Council resolutions and bilateral agreements. China opposes any unilateral actions that complicate the situation.” To prevent Indian ignominy, neither Modi nor Xi raised the Jammu & Kashmir issue during the informal summit.

Apart from this swinging of the diplomatic pendulum on Kashmir, India’s trade deficit with China has reached its zenith. Bilateral trade between China and India reached $95.54 billion in 2018, however, the trade deficit is now $53 billion in China’s favour, which is the biggest one for India. To ensure that India is happy during Beijing’s tough trade war with the US, Xi said a bilateral mechanism will be created to address the trade deficit and resolve the issue. However, no timeframe was set between Modi and Xi to resolve this.

It’s not clear how by wasting the taxpayers’ money, such merrymaking informal meets between two leaders, will impact and improve the bilateral relations, which is at its nadir. As a vassal of the US imperialist interests in South Asia, India will work as a military outpost of Washington DC and keep trying manoeuvres to wean away small states from Chinese influence. This is something Beijing will prevent at any cost, and it will keep the antagonism between India and China high even after several such informal summits.

The only conclusion that the second informal summit at Mamallapuram reached is that there will be a third informal summit in China for which Modi will get another chance for a foreign tour. Apart from this, all that India saw was a replication of “Hindi-Chini Bhai Bhai” drama, earlier enacted by India’s first prime minister Jawaharlal Nehru and former Chinese premier Zhou Enlai in the 1950s. The bonus was Modi cleaning detritus from an otherwise clean beach using a plastic bag, against which he has been crusading through PR tools. He tried to deliver a cleanliness message for his Nobel nomination, however, he forgot that thousands of manual sewage workers die each year while cleaning deep drains filled with toxic gases when he spends billions on lunar missions.

If these are what diplomatic informal summits mean, then a country like India, hit by an immense economic crisis, should have shunned them long ago. Those who cry foul over “taxpayers’ money” when it comes to public healthcare or education expenditure remain conspicuously silent over such prodigality by their favourite leader Modi, whom they revere. The Mamallapuram informal summit between Xi and Modi became another instance of India’s diplomatic extravagance for nothing.