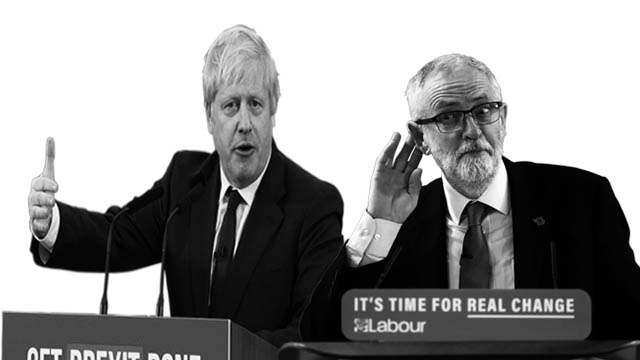 It’s the Tories! Britain voted Conservatives back to power in the UK general election 2019. Imperialist scum Boris Johnson returns to power with a landslide majority, defeating the Labour Party led by Jeremy Corbyn using extreme xenophobia, fascist rhetoric and by peddling sheer lies. The Conservative Party’s promise to do the long-awaited Brexit by 31 January 2020, while the Labour Party’s non-commital stance under Corbyn, helped Johnson to sweep the UK general election 2019 with absolute ease.

This landslide victory of Johnson and his triumphant re-entry into 10 Downing Street, riding on a comfortable majority that won’t force his Tory regime to seek support from the Democratic Unionist Party, will help him to conveniently ignore the concerns of Northern Ireland, which will be affected by Britain’s exit from the European Union (EU). Without depending on the DUP or the Scottish Nationalist Party, Johnson can drive his sheer fascist juggernaut and ruin Britain under the guise of Brexit now. Under his rule, xenophobic state atrocities against non-whites, Muslims and migrants will eventually increase and Britain will become Europe’s capital in white-supremacist fascism.

The liquidation of the Labour bloc led by social democrat Corbyn provided the much-required relief to the British ruling classes, who aren’t even able to digest the centrist and utmost harmless pink socialist bloc, as its rhetoric spoke of taxing the rich! Even the Labour Party’s inconsistencies on the Brexit agenda, the refusal to accept the fact that the EU is an imperialist bloc and quitting it, or weakening it will be eventually beneficial for the British and the European working class, caused severe damage to Corbyn. Now, with their teeth and claws out, the right-winger Tony Blair lackeys will bay for the blood of Corbyn and his so-called “left” policies.

After the victory of David Cameron in the UK general election 2015, the victory of Johnson, who is nicknamed Britain’s Donald Trump due to his sheer white-supremacist, xenophobic fascist politics, shows that Britain has gulped the xenophobic bait over the immigrant threat and Islamophobia that these white-supremacists have been propagating. Moreover, it shows that Europe’s second falling to neo-Nazis isn’t a far-off matter, rather, it’s around the corner now.

Genocidal thugs like Johnson will rule Britain for years to come with utmost impunity and partner with their American masters as loyal dogs. Happy over Johnson’s return to No 10, Trump announced that he will offer Britain a trade deal — which the Labour and the left criticise as an attempt to sell Britain to the US — that no European country ever got from the US. The US imperialist forces are keen to get hold of Britain’s privatised public services like the British Railways, water supply, healthcare (NHS), etc. Johnson, showing total obeisance towards his master will do everything it takes to offer Britain on a platter to Trump.

The Zionist terrorist Israeli thugs are happy over Johnson’s victory too. As the Labour followed a pro-Palestine line, the Zionist terrorists paid a huge amount of money to manipulate voters’ opinion and to project Corbyn as an anti-Semitist person. The Zionist Israeli terrorists played a crucial role in pulling the strings within the British ruling classes to polarise them against Corbyn and the Labour. As Zionist Israel will not only gain with trade deals under Johnson’s rule but also get into a stronger military partnership with Britain to carry out genocides, the victory of the Tories became a great moment for Tel Aviv to rejoice.

India’s Hindutva fascist Prime Minister Narendra Modi and his Bharatiya Janata Party (BJP) and the Rashtriya Swayamsevak Sangh (RSS) — the global fountainhead of Hindutva fascist terrorism — also played a crucial role in defeating the Labour in places with considerable upper-caste Hindu population. Johnson was supported by the BJP and the RSS, which have roots in the womb of the British colonial rule, to defeat the Labour for Corbyn’s standpoint against the Indian military occupation over Kashmir. The Hindu temples in Britain, controlled by the RSS and are infamous as strongholds of Brahminical bigots, helped to polarise Hindu upper-caste voters against the Labour. Johnson himself got a chance to address a Hindu upper-caste diaspora at the Swaminarayan temple, where he promised to work closely with the Hindutva fascist regime of Modi in India to garner votes.

The key factor that played the decisive role behind Johnson’s victory is the Brexit. By exploiting the majority of the British voters’ anxiety over the economic crisis, the abject poverty they are falling into, the austerity drive and rising costs of living, the Tories could blame everything on immigrants and Muslims. The Brexit was shown as an all-out solution to resolve the long-standing issues of the British working class and middle class, which it’s not.

Corbyn-led Labour’s reluctance to build up a mass movement in favour of Brexit albeit with a goal to weaken the imperialist EU bloc helped the Tory cause. The Labour’s constant vacillation on the issue of Brexit exposed its ideological bankruptcy. Even the British capitalists who supported the Labour were apprehensive about Corbyn’s soft corner for Brussels.

No amount of lies, smear campaigns and foreign funding could’ve helped Johnson and the Tories win if the Labour had a clear Brexit strategy and could respect the people’s demand for Brexit. The rise of Corbyn infused hope in the Labour and the social democrats of Britain and the world, however, that hope is now extinguished, as the UK general election 2019 proved that social democracy can’t defeat fascism.

What’s the takeaway from the UK general election 2019?

The big takeaway from the UK general election 2019 is that without an ideologically firm organisation, built on acute class politics and tempered in the flames of class struggle, anti-imperialist struggle, which aims at seizing power by fighting and overthrowing the monopoly-finance capital system, and which supports the liberation struggle of the working class all over the world against imperialism, there can be no real victory in an anti-fascist struggle. It’s not possible to defeat the ruling classes within the very framework they have created to safeguard their own interests.

The British working class can’t defeat the British and the global bourgeoisie unless they don’t chart out their own alternative course of action vis-a-vis the parliamentary bait dangled by the ruling classes to lure them. The UK general election 2019 is a stark reminder that even if the working class tries to do away with fascists in the parliamentary arena, they can’t achieve any success because they will always lack the resources and the support of the state that the fascists like Johnson will have.

It’s imperative that the British poor, the British working class and their genuine allies recognise the threat posed by the Tories as Johnson, in a bid to pay back his masters, will sell-off whatever public services are left in Britain, which will immensely harm the have-nots of the society. Poverty and starvation are increasing manifold in Britain, while the handful of rich will continue to amass more wealth. This will eventually leave the working class and the ruling classes face-to-face in the battleground and there, at that point in time, the political forces like the Labour won’t be of any use.

The likes of Corbyn act as safety valves of the imperialist system, who try to channelise the people’s anger against capitalist exploitation through the blind alleys of parliamentary struggle, leaving them astray. It’s imperative, in the wake of the UK general election 2019, the British working class, the migrant people, the poor, and the oppressed sections of the society unite under the anti-fascist banner of the revolutionary left of Britain who will not only show them a path to combat the British ruling class and their hounds like the Tories but also show the alternative system that’s much required in Britain to undo the damage done by centuries of capitalist exploitation and rule.