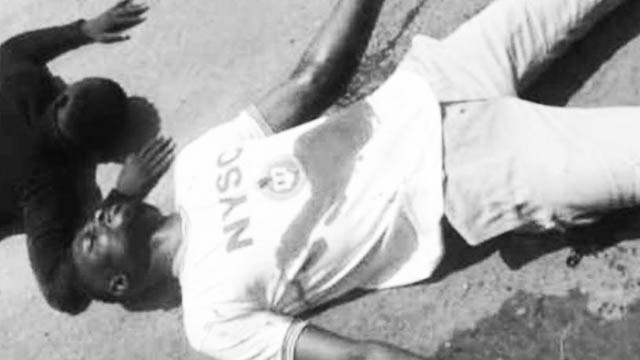 Nigeria is experiencing the worst bloodbath in its recent history, as the military shot protesters who have been demanding the disbanding of a rough force––Special Anti-Robbery Squad (SARS)––accused of atrocities, extortions, rape and other crimes. The #EndSARS movement in Nigeria gained momentum as protesters began agitation demanding a total police system reform. It was on Tuesday, October 20th 2020, that the military allegedly fired upon peaceful protesters protesting at the Lekki suburb of Lagos, the financial capital of the oil-rich West African country and killed many of them.

President Muhammadu Buhari’s government deployed anti-riot police and the Nigerian Army to crush the #EndSARS movement in Nigeria, after the people, who have been protesting since the last two weeks against the police unit, defied the three-day-long, 24-hour curfew. A large number of protesters were demonstrating at the Lekki tollgate of Lagos. The military apparently had the CCTV cameras removed before attacking the protesters and started spraying bullets at them. Disturbing videos that have emerged, apparently from Lekki tollgate, show the gory details of the atrocities.

Many have lost their lives, while many were shown seriously injured due to the indiscriminate firing by the Nigerian Army. Official tolls are varying, however, as per the west-sponsored human rights watchdog Amnesty International, 12 protesters were shot dead on Tuesday. Lagos State Governor Babajide Sanwo-Olu claimed that only one man succumbed to his injuries. He tweeted pictures of his visit to the hospital. Later, through a thread of tweets, he explained the sequence of events and blamed armed thugs. As the governor of a state has no role in fixing military rules of engagement, he passed the buck on President Buhari.

Through a strong censorship drive, apparently, it appears that the government has stopped the outflowing of photos and videos of the incident. Yet, the social media is floating with such videos and many have found their way outside Nigeria through WhatsApp and other mediums. In most of the videos, the armed forces, apparently of the Nigerian Army, are seen firing at the unarmed civilians without any threat from the latter.

The Nigerian Army has vehemently denied any fatalities through a tweet calling all pieces of news that talk about its atrocities on the civilian protesters as “fake”. The Nigerian Army headquarters tweeted some screenshots of the news on the military crackdown and killing of protesters, with the stamp of fake news. The authenticity of many videos circulating on the social media has been questioned, but then too, the State Governor’s narration, his hospital visit and his controversial statement put to question Buhari’s silence on the issue.

Sanwo-Olu said on Twitter: “As the Governor of our state, I recognize the buck stops at my table,” and that he would work to “get to the root of this unfortunate incident and stabilize all security operations to protect the lives of our residents.”

He apologised for the bloodshed and declared that all state functions shall be suspended, except security, for three days, a three-day-long lowering of flags and a constitution of a five-man fact-finding committee that will investigate “the Rules of Engagement ordered & adopted by the Nigerian Army.”

There are five core demands of the #EndSARS movement in Nigeria. The protesters want justice for the families of police brutality victims, the re-training and remoulding of the SARS officers before assigning them to any other police unit, an independent investigation into the allegations of police brutality, as well as an increase of police salary to ensure they get enough to pay attention to the law and order issues. Moreover, people are also demanding the end of corruption in public life and reforms in governance.

Fed-up with the extortions, killings, gangrapes and other crimes committed by the SARS, the Nigerians had no other way but to come out of their houses and fight their own battle heroically, without fearing for their lives. But Buhari’s regime has been fooling them. Though on October 11th 2020, the government declared that SARS will be disbanded, it wasn’t the first time. It’s rather the fourth time the government has announced the disbanding or reform of the rough force. But none of the declarations ever materialised.

Fearing massive public demonstrations over the killing of civilians in Lekki, it appears that the Nigerian state will now suppress the movement with desperation. The firing on protesters of #EndSARS movement in Nigeria has stirred the conscience of the world to some extent, as white imperialist hawks like US presidential candidate Joe Biden, Democrat war-monger Hillary Clinton, and a few black celebrities of the US have condemned the act. This has exerted pressure on Buhari and his regime. However, there are more concealing acts than doing justice to the people.

The #EndSARS movement in Nigeria is an inspiring movement like the Black Lives Matter in the US over the brutal murder of George Floyd on May 25th 2020. It shows how the people question all state institutions and ask accountability from a government they pay taxes to. It’s important that the Nigerian people firmly encircle Buhari’s regime through their movement and force it to capitulate before the people’s might. A new Nigeria can be built only when the sacrifice of those killed by the state can be avenged by winning the political battle they fought till their death.