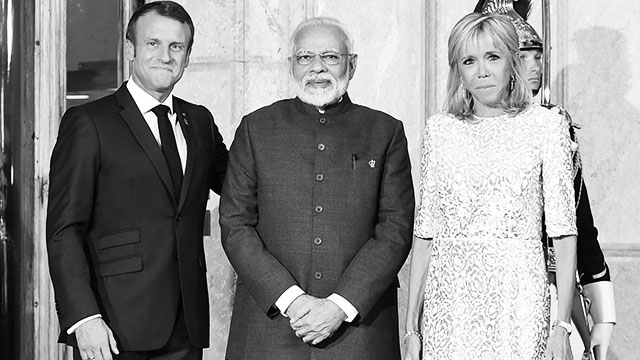 Soon after a rift appeared between the Muslim countries of the world and France over the latter’s thrusting of Islamophobic content on the Muslim minority under the guise of “freedom of expression”, India, which, under Prime Minister Narendra Modi, has a dismal record in upholding any individual liberty, secular values, freedom of expression or free speech, lend its support to French President Emmanuel Macron’s government. This sudden move by the Modi regime, which officially pursues a policy of not hurting “religious sentiments” of any community, at least on paper, became a mockery of itself.

In an official statement issued by the Indian Embassy in France, the Modi regime said: “We strongly deplore the personal attacks in unacceptable language on President Emmanuel Macron in violation of the most basic standards of international discourse. We also condemn the brutal terrorist attack that took the life of a French teacher in a gruesome manner that has shocked the world. We offer our condolences to his family and the people of France.

The obvious reference was made to the mocking of Macron by Turkish fascist dictator Recep Tayyip Erdoğan. India’s bête noire Pakistan also criticised Macron in unequivocal terms for his support to cartoons depicting the Islamic prophet, Muhammad. Apart from these two, a host of Gulf monarchies and US-sponsored Arab despots condemned France for supporting the caricature of the holy figure in Muslim theology.

Erdoğan’s criticism of Macron is rooted in his desire to become the unchallenged leader of the Sunni Muslims globally, for which he has been investing a lot of money all over the world and competing with the Wahhabi Saudi Arabian monarchy, which is the de facto ruler of the Sunni Muslim world. While Modi shared a warm relationship with Erdoğan, it spoiled over India’s formal military annexation of Kashmir in August 2019 and Turkey’s alliance with Pakistan. For Modi, supporting Macron also became imperative to combat Pakistan’s global stand.

These developments made Modi’s support for Macron inevitable. The Modi regime has officially juxtaposed India in the array of countries that are on the side of the US imperialism-led world order, which justifies Zionist Israeli occupation of Palestine as well as endless violence and war in the Middle East to secure hegemony over the oil-rich region. As the Modi regime, enchanted by the Hindutva fascist doctrine that reveres white supremacy, wants to portray India as a pro-west force in South Asia and cajole European countries in its attempt to wage a war against China, a solid defence of France and its form of fascism becomes inevitable for Modi as well.

But, as Modi and his Bharatiya Janata Party (BJP) have no penchant for democratic values, libertarian principles and secularism, the last one being reviled the most by the Rashtriya Swayamsevak Sangh (RSS)––the global fountainhead of Hindutva fascism––and its affiliates, there must be something more that may have triggered this sudden love for France. What’s making Modi and his coterie support France’s idea of “freedom of expression” when it arrests journalists, writers and intellectuals in India who dare to oppose the BJP’s policies, even if it’s done on the social media?

One must remember that the Hindutva fascist thugs of the RSS and the BJP have been accused of carrying out large-scale anti-Muslim pogroms. They lynch hapless poor Muslims, accusing them of either eating beef, cow slaughter or for loving or marrying a woman from the majority Hindu community, with sheer impunity and without any compunction. The bestiality shown by these Hindutva fanatics, supported by the RSS and the BJP, with utmost insouciance can beat the Islamist fanatics easily. Freethinkers and critical journalists have been killed or jailed in the last six years of Modi’s rule.

For most of the liberal democrat opponents of Modi and his BJP, it’s the commonly shared Islamophobic vision that united the Indian ruler with his French counterpart. However, this issue can’t be so easily simplified. Though the RSS and the BJP want to derive Islamophobic mileage from this fiasco created over the cartoons and the Muslim world’s denouncement of France, by showing the contradiction between Islam and the modern ideas of democracy, secularism and freedom, the real cause of this support is more or less economic.

On one hand, Modi has been entangled in the Rafale Jet scam, from which Macron has been shielding him, on the other, he wants to lure France for more foreign capital investment at a time when the overall economy of India is in an abysmal crisis. Modi won’t lose the golden opportunity to support Macron, who is trying to regain his lost popularity due to the “Yellow Vest” protests throughout France from November 2018 until March 2020, which even brought out the guillotine on the street. He knows this support to Macron during the latter’s hard time will reap benefits for his regime as well.

The BJP and RSS’s wholehearted support to Macron also creates a smokescreen that bamboozles the opponents, who believe the rabid Hindutva fascists are supporting France out of their sheer Islamophobic standpoint. Due to their political myopia, they don’t see how cunningly the Modi regime has changed a global narrative into a Hindu-Muslim dichotomy, entrapping all discourse within the ambit of religious identity. These exercises will help Modi ensure that the Rafale Jet scam remains buried forever and no blot is shown on its attire.

Anil Ambani, the younger sibling of Reliance India Ltd chairman Mukesh Ambani, who is one of the biggest sponsors of the BJP, is a co-accused in the Rafale Jet scam. Though the Supreme Court has rejected the plea for investigation raised by different opposition leaders and activists, the scam hangs like Damocles sword over the Modi regime. A state-run entity, Hindustan Aeronautics Ltd (HAL), was replaced as the offshore partner of Dassault Aviation, the French manufacturer of the medium multi-role combat aircraft, with Anil Ambani’s novice firm Reliance Defence Ltd (RDL) on Modi’s insistence during his France tour in April 2015.

The Rs 580 billion Rafale Jet scam helped Ambani to bag a deal worth Rs 220 billion, which will be instrumental for reviving his ailing fortunes. Mr Ambani’s near-to-bankrupt finances didn’t bother the Indian defence establishment. None flagged his firm’s appointment. Moreover, RDL had no experience at all in aeronautics, leave alone hi-tech fighter aviation, at the time of signing the deal. These were the points that the opposition raised on the Rafale Jet scam, but the Modi regime, in collusion with all arms of the state, suppressed the facts.

Former French president François Hollande helped Modi in changing an earlier deal stuck during the Congress-party led government’s era for 126 jets with HAL as the offshore partner. Ambani’s Reliance confirmed that it invested in a film by Hollande’s partner Julie Gayet when the Rafale Deal was changed in favour of the RDL by replacing HAL. To safeguard himself from allegations, Mr Hollande told that the French side wasn’t given a choice in the selection of RDL as the offshore partner of Dassault Aviation.

Rather than investigating this scam by his predecessor and the French defence major Dassault Aviation, whose management jumped into the fray of Indian politics to shield Modi from scam allegations, Macron further helped to cover up, of course, in return of crumbs for himself. In 2018 he claimed that he doesn’t know the deal as it was concluded under Hollande’s regime. Since 2019, Macron has been instrumental in elevating France-India ties, especially in defence.

With an €880m trade surplus in 2019, bilateral trade with France is profitable for Indian comprador capitalists. This makes it imperative for Modi to retain good relations with Macron and push the idea of true secularism under the bus like a loyal RSS man. In his efforts to build up an export-oriented economy to compete with China as a choice of foreign capital investment, Modi will ensure that the relationship with France is strengthened. This will also allow the defence trade, which earns Modi’s BJP a large kickback, to grow manifold between France and India.

As Modi and the Hindutva fascist camp threw their weight behind Macron, the new delivery of Rafale Jets arrived in India, and the Indian Embassy tweeted that the France-India relations are strengthening. A host of fascist politicians in France have appreciated India’s move to support the most unpopular French president in recent history. The new bonding between the servile Indian comprador capitalists and their French imperialist masters will pave the way for bigger future collaborations between the French and Indian fascists.

Therefore, for the working class and the progressive, anti-fascist forces, the task will be to not get disarrayed and lose the sight of achievement in the cacophony over Islamophobia but expose the monstrous imperialist schemes of France and the real reasons behind Modi’s support for Macron during his crucial hours of survival. In the long run, neither Macron nor Modi can thwart the waves of popular movements against their sclerotic, corrupt and tyrannical regimes. The realisation of the real essence of the French Revolution’s teachings will happen through the anti-fascist movements by the working class, the peasantry and the oppressed masses. Like France, like India.