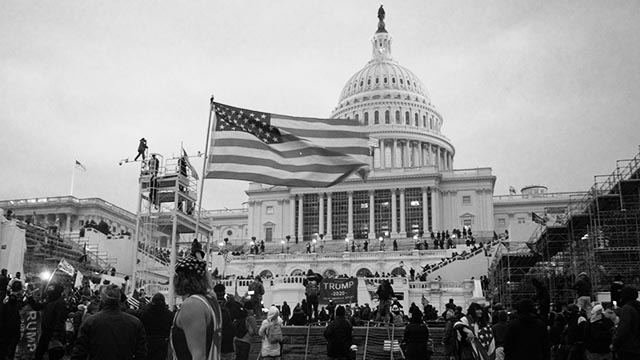 The world looked with utmost astonishment at the USA, when the angry white-supremacist fascist stormtroopers loyal to the outgoing President Donald Trump stormed the Capitol Hill in Washington DC on January 6th 2021 to stop president-elect Joseph R (Joe) Biden’s electoral victory in the polls held in November 2020. The façade of its “democracy”, which the US has been marketing since decades to justify its global imperialist hegemonic quest, was torn into pieces during the Capitol Hill rioting by Trump supporters. But the incident also raised a lot of questions, which challenge the dominant narrative around the incident.

Five people, including a policeman and a 35-year-old woman Ashli Babbitt, a veteran of the US Air Force and a vociferous Trump supporter, were killed in the violence, first of its kind in the modern American history. The security forces used limited violence to disperse the mob and secure the lawmakers—including the self-styled left “Woke”—hiding under their desks and seats. One of the reasons behind the police’s restraint was the fact that the rioters were all white men and women, draped in the US, Confederate and ‘Make America Great Again’ (MAGA) flags. This optics of Capitol Hill rioting, the impunity with which these white-supremacists seized control of the US seat of power, revealed how fragile the US’s so-called “democracy” and its “security” systems are.

The utmost aggrandizement of the white-supremacist fascists, who rampaged at the seat of power of the world’s “most-powerful country”, became ignominy for the US’s ruling classes, who have kept the grotesque face of their reign behind the veil of “democracy” and “progress”. The US, which has the world’s highest defence budget, couldn’t defend its political capital from a bunch of weirdly-dressed rioters. It couldn’t prevent the rioters from taking down the US flag in the Capitol Building and unfurling a Trump flag at its place. If it was a Black Lives Matter protest, then, of course, more bloodshed would’ve happened.

Such failure on part of the administration in preventing the Capitol Hill rioting shows that the US’s “defense budget”, its military prowess, etc, are all reserved for occupying and colonising countries in Asia-Africa and Latin America, and not to defend itself per se. Thus, the very ruling classes, whose representatives from both Republicans and Democrats fought to ensure that Trump didn’t veto an $800bn military budget, didn’t dare to up the ante against the white-supremacist fascists. The reason behind it is simply that most of the politicians from both camps of the ruling clique are white-supremacists themselves and either wear their prejudices on their sleeves or hide them beneath veils.

While Trump is accused of the Capitol Hill rioting, for calling his followers to oppose the “election fraud”, it’s too naïve to believe that the storming of the Capitol Hill and the rioting inside it were his handiwork without the connivance of the administration’s support. If Trump had wanted a coup, and the US’s other arms of power wanted to thwart it, then could these fur-clad white-supremacists flock the Congress with impunity when it was to decide on Biden’s fortune? Any normal day it’s even impossible to approach the Capitol Building without being frisked or stopped by the police or secret service personnel; the impunity with which the rumbustious mob entered and vandalised the site, raises several doubts about the role of the state and deep state actors. Nothing, absolutely nothing, can be ruled out when something of this scale took place, stunning the world.

Though Trump has condemned the Capitol Hill rioting through his social-media handle, after he was arbitrarily banned by Facebook and Twitter from using their platforms to disseminate any information, it didn’t stop Speaker Nancy Pelosi and other Democrats from demanding Trump’s impeachment or the US constitution’s 25th Amendment to topple him. Even the Republicans aren’t by his side anymore. Many Trump-appointed key position-holders tabled their resignations following the allegations of the “coup”.

But if one believes the mainstream narrative that the outgoing president himself engineered the Capitol Hill rioting, that Trump organised a “coup” to retain his grip on power, knowing well that the US’s constitution has divided the power between different arms of the state, ie, the judiciary, the executive and the legislative, in such a way that none of them can become omnipotent or unchallengeable, then it will be an exhibition of political myopia. Ironically, it’s the so-called “Woke”—the oxymoron “left-liberals”—who are blindly accusing Trump of organising a coup to subvert the process of transfer of power to Biden. They are accusing Trump of being a “violent” man while rallying behind Biden and supporting his quest for power.

This has eulogised the role of the president-elect septuagenarian, who’s accused of several war crimes in the Middle East during his tenure as a vice president in Barack Obama’s administration. Biden is a cunning warmonger and a bigger threat to world peace vis-à-vis Trump—the only US president in recent years to not start any new war during his tenure—but with a better PR machinery and strong support from the US’s dominant corporate lobby that wants to revive the Obama-era all-out war policies to amass the greater amount of wealth. Now, using Trump supporters’ Capitol Hill rioting as a pretext, Biden will be eulogised and projected as a face of democracy and freedom in the US. No wonder if he too wins a Nobel Peace Prize like Obama.

Biden seized the opportunity to portray himself as a torchbearer of democracy and Trump as the villain. He trained his guns at Trump, and blamed him for the Capitol Hill rioting, calling the latter as the “dark moment in the nation’s history” in his speech. Biden called the mob violence as an act of “insurrection” and blamed Trump, without any evidence. “This is not dissent; it’s disorder. It’s chaos. It borders on sedition and it must end now,” he said from Delaware. Biden’s role helped him wean away from Trump many Republicans. The Democrats had a clear victory in the Congress in affirming the presidency of Biden by decimating the Republican concerns.

The swiftness with which the Congress members left their partisan rancour and rallied against Trump, affirming Biden’s victory, raised doubts about the real intention behind the “coup”. Though the Republicans earlier planned to oppose a series of states won by Biden, they soon joined the Democrats in affirming Biden’s victory, disputing only Arizona and Pennsylvania. US Vice President Michael (Mike) R Pence, who was a Trump loyalist, criticised the violence along with Republicans like Senate Majority Leader Mitch McConnell (R-KY), Senator Mitt Romney (R-UT), etc. This further isolated Trump and sealed his fate. As per reports, Trump will skip Biden’s inauguration on January 20th.

“To those who wreaked havoc in our Capitol today, you did not win. Violence never wins. Freedom wins. This is still the people’s house,” Pence was quoted by The Washington Post. Pence uttered this while reopening the Senate. “We gather due to a selfish man’s injured pride and the outrage of supporters who he has deliberately misinformed for the past two months and stirred to action this very morning,” Romney said. “What happened here today was an insurrection incited by the president of the United State”, he added.

Trump had disputed the election results and used all options available to him to retain power. He did ask his white-supremacist fascist supporters to not accept the verdict and continue to support his presidency, while Biden has been preparing his administrative team. But the Capitol Hill rioting by the white-supremacist fascists, who neither seized control of the legislature, nor established any parallel government, but only carried out random vandalism and rampage, doesn’t amount to a “coup”, which the US secret service agency CIA is expert in organising. At most, it can be labelled as violent mob violence by a gang of privileged fascist thugs. But it’s Biden who gained maximum political mileage from the Capitol Hill rioting.

Trump is an unapologetic white-supremacist, Islamophobic, homophobic and hyper-capitalist fascist with no penchant for democratic values or the concept of equality. It’s true that under him the white-supremacist fascists, tempted by the narrative of being “persecuted” and “marginalised”, began to assert their hate-mongering with utmost impunity and at each corner of the US. But it will be wrong to blame Trump alone for the problem.

Biden and his friends have no problems with white-supremacist fascism. They won’t crack a whip on it. They won’t suppress the fascist movements because they tactically derive mileage from it and, to some extent, support their major demands, albeit clandestinely. It was under George W Bush Jr’s rule that the Sub Prime Crisis rocked the world economy’s boat. The intensification of capitalism’s crisis and increasing wealth gap created insecurities in the society under Obama’s rule and those insecurities fed to the intensification of the white-supremacist fascist movement. The Capitol Hill rioting is a manifestation of the fact that those insecurities are still titillating many white, privileged, pro-capitalism American bigots.

The white-supremacist fascism must be destroyed for the sake of world peace, democracy and liberty. But the Democrats, who aren’t merely bed-partners of fascism but fascists themselves, won’t be taking any concrete step to curb the American fascists. The MAGA reactionaries won’t simply vanish under Biden. If Trump has been nurturing them for his devious agenda, Biden will nurture them to create an optics of fear among the people of colour, the anti-fascist sections of the Americans and garner their support. The Capitol Hill rioting serves this purpose.

To end the tyranny of the American white-supremacist fascism, the first precondition is the uprooting of its predatory monopoly-finance capitalist rule, which no political party within the “system” can dare to. Until the Wall Street’s exploitation of resources, labour and markets of Asia-Africa-Latin America isn’t ended through strong people’s movements, there will be no end to the corporate-funded fascism, which comes to rescue of the very system when it’s in crisis. The Capitol Hill rioting is a fascist act, but that’s not the only manifestation of fascism. Seeing Trump’s fascism and ignoring Biden’s fascism will not help the cause of anti-fascism at all.