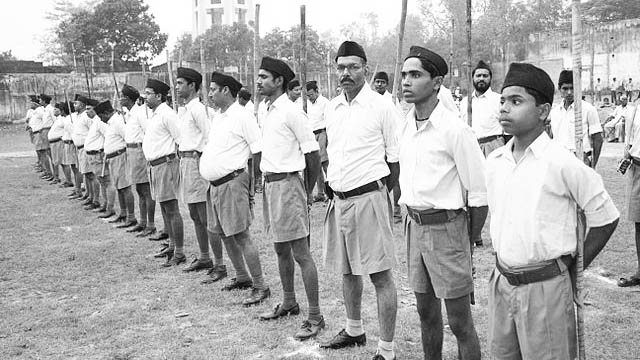 “The RSS is a Hindu nationalist paramilitary group, whose early leaders openly admired Adolf Hitler and Benito Mussolini, and which has been repeatedly accused of stoking inter-religious hatred and committing acts of violence,” stated Deputy Clémentine Autain in France’s National Assembly on March 23rd.

Autain was posing a parliamentary question to the French Minister for Europe and Foreign Affairs, regarding a February 9th visit by France’s Ambassador to India, Emmanuel Lenain, to the headquarters of the Rashtriya Swayamsevak Sangh (RSS). “The deputy would like to know what is the link between the French government and the RSS, an organization which does not hold governmental functions and elective mandates,” said Autain. “Are there any plans for other meetings between French officials and leaders of the RSS?”

“Attacks against religious and ethnic minorities have also increased under the current government of India, led by the Bharatiya Janata Party (BJP), an offshoot of the RSS,” warned Autain. As these attacks continue, India’s international reputation has slipped. A Swedish institute recently declared India is an “electoral autocracy,” a US institute downgraded the country to “partly free,” and a growing number of elected officials like Autain are not only formally voicing concerns about the RSS but also referencing the paramilitary’s connections to the European fascist movements of the 1920s-1940s.

“The BJP is seen as the political wing of the Rashtriya Swayamsevak Sangh (RSS), the radical Hindu, paramilitary ‘largest volunteer corps in the world,’” declared a group of nearly a dozen German parliamentarians from Die Linke Party in a parliamentary question posed in early 2021. “The ideology of the RSS is based on the idea of a leadership claim by political Hinduism (Hindutva) and the political striving to create a state according to radical Hindu rules. It was inspired by the fascist movements in Europe led by Mussolini and Hitler.”

Under the current BJP regime, claimed the German group, “The police and the military use violence against activists and protesters, human rights defenders are spied on, wiretapped, searched and harassed, freedom of the press is increasingly restricted, and arbitrary arrests, violence, torture and extrajudicial killings are widespread. The Indian government uses a multitude of draconian laws to muzzle government critics and to prevent human rights defenders from doing their legitimate work under the guise of national security.” Furthermore, they warned, “The RSS is also represented in other countries such as the USA, the United Kingdom, Canada and Germany by the Hindu Swayamsevak Sangh (HSS) and advocates its interests on a political, economic and cultural level.”

Enquiring about Germany’s perspective on the current circumstances in India, the group asked: “To what extent does the Federal Government see a deterioration in the human rights situation, the rule of law and democracy in India since the election of Prime Minister Narendra Modi?” Moreover, they inquired: “How does the federal government position itself towards the RSS, especially in view of the Hindu nationalist ideology?” Additionally, they questioned: “What information does the Federal Government have regarding the RSS properties in Germany (HSS), in particular with regard to its founder and the managing director, financing, main activities and meetings with politicians or public authorities?”

In November 2020, Australian High Commissioner Barry O’Farrell followed in Lindner’s footsteps. “He’s only the second senior diplomat from any country to meet the RSS at their offices in recent times,” announced Australian Senator Janet Rice. “This is a disgrace. We believe that the high commissioner should resign.”

Speaking on the floor of the Australian Parliament, Rice denounced the RSS as “a fascist organization that openly admits admiration for Adolf Hitler and the appalling genocide that occurred under his Nazi regime.” She continued: “Time and time again, the RSS has attacked Indian people’s rights to freedom of expression, freedom of religion and safety. Their advocacy of a Hindu Rashtra [nation] is for an India where, by definition, minorities are denied rights and privileges. They demonize and encourage persecution of some of the non-Hindu citizens of India, particularly those of Muslim background.”

As BJP rule of India enters its seventh year with RSS member Prime Minister Narendra Modi at the helm, the paramilitary’s influence appears certain to expand. “The BJP relies on the RSS for manpower and organizing grassroots electoral support,” explained a Central Intelligence Agency report in the 1990s. According to a former US ambassador to India, “The RSS can survive without the BJP but the BJP cannot exist without the RSS.”

So long as the BJP remains in power, the RSS’s grip over the country’s circumstances will likely only tighten. Considering that, it is probable that visits to the RSS by senior diplomats from abroad will increase, but so also will international awareness and criticism of the paramilitary.

[This article was first published as “Fascism of India’s RSS Denounced by European Members of Parliament” on Medium. Republished with style editing.]

Pieter Friedrich is a South Asian Affairs Analyst who resides in California. He is the co-author of Captivating the Simple-Hearted: A Struggle for Human Dignity in the Indian Subcontinent. Discover more by him at pieterfriedrich.net.