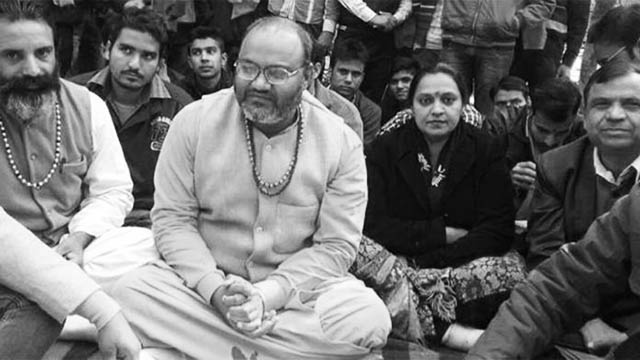 “Islam should be eradicated from Earth,” said Ghaziabad, Uttar Pradesh based Swami Yati Narsinghanand Saraswati in 2019, adding, “All Muslims should be eliminated.”

Narsinghanand’s call for genocide drew fresh attention in mid-April 2021 after the Vishwa Hindu Parishad of America (VHPA) — the US branch of India’s VHP, which is itself the religious wing of the Hindu nationalist paramilitary Rashtriya Swayamsevak Sangh (RSS) — invited him to conduct a recitation and explanation of Ramayana for Chaitra Navrati, a Hindu festival. Soon after it was announced, however, news of the invitation sparked outrage.

“Hosting someone who calls for genocide is unacceptable for US-based non-profits such as VHPA,” stated Rutgers University Professor Audrey Truschke. Referring to the religious-nationalist political ideology known as “Hindutva,” she called the event “another step — a somewhat extreme step — in the acceleration of Hindutva hate by US organizations.”

Journalist Raqib Naik wrote, “Last week, I reported for Al Jazeera English how five US-based Hindu rightwing groups linked to RSS received $833,000 in COVID aid. Today, VHPA, [one of the five], announced an event inviting Yati Narsinghanand — a militant priest who called for the murder of Muslims in India — as the main speaker.”

Hindus for Human Rights (HfHR), a US-based non-profit which launched a petition opposing the event, explained, “Just last month, a 14-year-old Muslim boy was violently assaulted for drinking water at [Narsinghanand’s] temple in Ghaziabad. And an affiliate of his organization provides children as young as nine with arms training to ‘fight Muslims who are exploiting Hindu women.’”

Notably, Narsinghanand’s host of hateful remarks include a call to “finish off Islam” which he issued on the eve of the February 2020 anti-Muslim pogrom in Delhi.

Within a day of the controversy over their invitation to him, VHPA washed their hands of the issue, announcing that they were “not formally involved in organizing a recent spiritual event with Swami Narsinghanand.” The group insisted, “A supporter of the VHPA had circulated the event flyer and sought to stream it on the VHPA social media channels, without being fully aware of some of the controversial statements made by him. The event was cancelled after VHPA became aware of the aforementioned statements.”

VHPA’s claim that they were not formally involved in the event, however, rang hollow considering that the event flyer was not merely circulated through official VHPA social media channels but posted to — and featured on the front page of — their official website.

Regardless, this was not the first time that VHPA has given a platform to Hindu supremacist or notoriously Islamophobic figures.

In 2018, VHPA hosted the second World Hindu Congress (WHC) in Chicago, which was organized by VHP Secretary Swami Vigyananand. In 2003, Vigyananand, calling for the distribution of trishuls — small tridents — to VHP members, declared, “The trishul sends a message that we should stand and fight. You can’t kill with the trishul but symbols and ideas are interconnected by the law of association. When the mind gets ready, everything is possible.” His call was particularly ominous in the wake of the 2002 Gujarat Pogrom in which RSS and VHP members were accused of massacring upwards of 2,000 Muslims. As Human Rights Watch reported, “The attackers arrived by the thousands in trucks, clad in saffron scarves and khaki shorts, the signature uniform of Hindu nationalist, or Hindutva, groups. Shouting slogans of incitement to kill, they were armed with swords, trishuls.”

Notably, in 2018 the WHC organizers temporarily renamed the conference venue’s grand reception hall as “Ashok Singhal Hall” after the former VHP chief. The late Singhal, notoriously, had described the slaughter in Gujarat as a “successful… experiment… which will be repeated all over the country now.” He had further applauded how entire villages were “emptied of Islam.”

Singhal had a record of collaboration with VHPA, including as recently as September 2015, when he joined then VHPA President Abhay Asthana in inaugurating an event in Massachusetts. In November 2015, upon Singhal’s death, Asthana described him as a “friend and a companion in the journey of VHP of America since the mid-80s.” Earlier, at the first WHC in 2014 (where Asthana was also a speaker), Singhal declared (regarding the election of Narendra Modi as Prime Minister of India), “Proud Hindus have finally come to rule Delhi. … It’s time to create a Hindu superpower in the world.”

In 2013, VHPA organized a seminar in Chicago to celebrate the 150th birth anniversary of Swami Vivekananda (who is known for introducing Hinduism on a global platform). What should have been a celebratory occasion was mired in controversy when the Council for a Parliament of the World’s Religions (CPWR) — an interfaith group founded with direct inspiration by Vivekananda — withdrew from the event. Their decision was motivated, in part, by VHPA’s choice of Hindu nationalist icon Subramanian Swamy as a keynote speaker.

Swamy, noted CPWR, was removed from his teaching position at Harvard in 2011 for his Islamophobia. In particular, he had published an article demanding that Muslims be stripped of voting rights and calling for razing hundreds of Indian mosques. (Much later, Swamy argued that Muslims are “not in an equal category” to non-Muslims.)

In a 2014 interview, VHPA’s Asthana explained that VHP was founded in 1964 with “its own mission and its own vision,” while VHPA was founded in 1970. “It is a distinct organization,” he said. “Nothing to do with Vishwa Hindu Parishad of India — legally… Operationally, we are two distinct entities.”

Indeed, VHPA has nothing to do with VHP — legally.

VHPA was founded by Mahesh Mehta, an RSS member who served in the same unit as fellow member Modi before emigrating to the US. Mehta, who is a Vice-President of VHP, also “played the leading role in starting [the] RSS clone in the US — Hindu Swayamsevak Sangh” and “was instrumental in starting a dozen other organizations such as Hindu Students Council, Overseas Friends of Bharatiya Janata Party, Sewa International” and more. His credentials certainly indicate that VHPA was planted as a subsidiary — albeit a legally and operationally distinct one — of the Sangh Parivar (the umbrella term for the family of Hindu nationalist groups springing from the RSS).

Moreover, the VHPA’s routine platforming of Islamophobic figures demonstrates its deep ideological ties to the VHP. The parent group’s co-founder, then RSS chief MS Golwalkar, claimed that Muslims (and Christians) were “internal threats” and members of “foreign races.” Even going so far as to term them “traitors” for being non-Hindus in India, Golwalkar called for their disenfranchisement and hinted that they should be “purged” from the country — just as Nazi Germany had done with its minorities.

“To deny the connection between the VHPA and the VHP — and by extension, the RSS — is to insult our intelligence,” wrote HfHR co-founder Sunita Viswanath. As her organisation stated, “For decades, the VHPA has continually tried to downplay its links to Hindu extremists in India… VHPA’s invitation of Yati Narsinghanand Saraswati is just another example proving the deep ties that exist between Hindu nationalist organizations in the United States and Hindu extremist leaders in India.”

After VHPA’s track record of providing a platform to voices of hate, it’s also an insult to every rational person’s intelligence for the group to argue that it was “not formally involved” with the planned Narsinghanand event.

Following the cancellation of the event, HfHR called on current VHPA President Ajay Shah to “take full responsibility for organizing the event and to publicly disavow the statements of Yati Narsinghanand Saraswati, whose calls for murder and genocide against Muslims have incited violence in India.” Meanwhile, some voices in India insist, “It needs to be said without a moment of doubt and hesitation: any person who does not demand the immediate arrest of Narsinghanand and the leading members of his gang is an enemy of a free and open society.”

Whatever the future holds for Narsinghanand, however, VHPA — thanks in part to generous funding from the US government — appears likely to continue generally uninterrupted operations for the foreseeable future unless and until the nonprofit’s activities and ties to the Sangh Parivar in India come under much closer scrutiny.

[This work is reproduced from TwoCircles.net “VHP-America’s Narsinghanand controversy is tip of Islamophobic iceberg” with the permission of the author. Minor style editing is done.]

Pieter Friedrich is a South Asian Affairs Analyst who resides in California. He is the co-author of Captivating the Simple-Hearted: A Struggle for Human Dignity in the Indian Subcontinent. Discover more by him at pieterfriedrich.net.