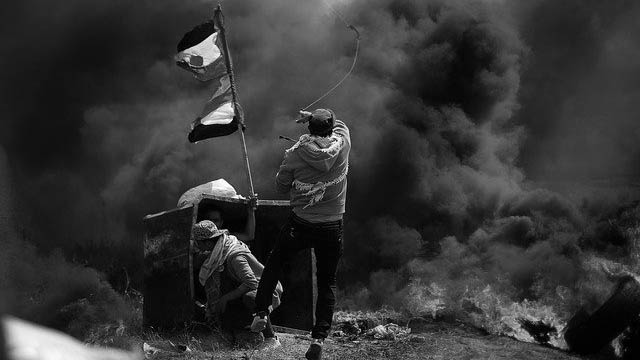 These Zionist Israeli terrorist attacks on Palestinians have provided political oxygen to the provisional occupation regime’s chief Benjamin Netanyahu. The optics of gory atrocities against Palestinian people is used by Netanyahu to incite his diehard fans. He is keen to return to power with a thumping majority by riding the Palestinian corpses. Netanyahu threatened on Tuesday that Palestinians “will pay, a very heavy price” for their resilience.

Tensions erupted in occupied East Jerusalem since the Zionist terrorist forces started imposing restrictions on Arab people. The ancient city known as al-Quds has seen a rising tally of forceful eviction of Palestinians from their homes by Zionist terrorist settlers who are seizing their properties. The tension escalated as atrocities and repression by the Zionist terrorist occupation forces intensified in the Islamic holy month of Ramadan when the Muslims fast from dawn to dusk.

Zionist Israeli terrorists blocked access to the Al-Aqsa Mosque—the third sacred site in Islam—on Friday, May 7th, the last one of Ramadan, which draws a large number of Muslims. On the night of Saturday, May 8th, called Laylat al-Qadr or the Night of Destiny, which is the most sacred night of Ramadan, the Zionist terrorists blocked the Palestinian Muslims from accessing the mosque. It’s estimated nearly 90,000 people pray at the site that night.

From Monday, May 10th, the Zionist Israeli forces started a series of ghastly attacks on the worshippers and protesters at the Al-Aqsa Mosque compound. Many Palestinians, who are evicted from their homes by Zionist settlers in the occupied area, are protesting at the mosque too. Zionist terrorists lobbed tear gas shells, stun grenades and fired rubber pellets as well as fired live cartridges to disperse the protesters.

Apart from the Zionist Israeli terrorist attacks on Palestinians at the Al-Aqsa Mosque compound, ultra-right Zionist groups, backed by the police and paramilitary troops, organised rallies in the old city to observe the Zionist occupation of East Jerusalem in the 1967 Arab-Israel War. The fascists attacked and hurled abuses at the Palestinians. Massive unrest broke in the city of Lod, resulting in the declaration of an emergency. A young Palestinian man was killed in Lod by the Zionist forces.

Quite conveniently, the western mainstream media, which has forever whitewashed the Zionist terrorism as an “act of self-defence” and projected the terrorist Israeli Defense Forces (IDF) in the brightest shade, blamed “both sides” for the violence and even showed the unequivocal attack on Palestinians by Zionist terrorist forces and occupiers as “clash” between two sides. It’s easy to understand their compulsion to peddle this narrative, as it blames the Palestinian side for escalating tension and the Zionist terrorists are shown as those who are on the “defensive”.

Now, following their usual template, the western powers and their lackey states have urged “both sides” for peace instead of pressurising the Zionist terrorists to stop the mindless violence against Palestinian people. The low-grade rockets fired by the militant group Hamas is magnified by the Zionist terrorists to cover up their crimes against humanity. At this juncture, it’s even infantile to consider that the international community, which is under a tight colonial grip of the US, which patronises Zionist terrorism, will even take any step except adopting some resolutions— full of cliché—in the toothless United Nations (UN), which the Palestinians care a lemon about.

The present constant Zionist Israeli terrorist attacks on Palestinians can’t be addressed by resolutions and pleading with the terror-monger forces in Tel Aviv. This is the colonial persecution of the oppressed people by the terrorist forces. The progressive international community must now support the Palestinian people actively to help them tide over the crisis and defeat the Zionist terrorists in a decisive war and win victory for a free Palestine. Nothing less than a free Palestine can be of any effective utilisation for the Arab people and long-lasting peace in the region.