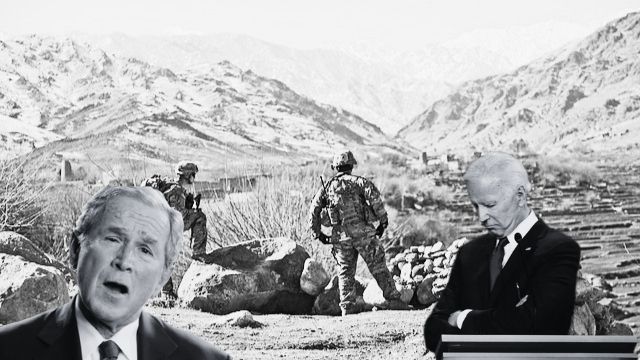 “I flew to Afghanistan, to the Kunar Valley — a rugged, mountainous region on the border with Pakistan.  What I saw on that trip reinforced my conviction that only the Afghans have the right and responsibility to lead their country, and that more and endless American military force could not create or sustain a durable Afghan government,” US President Joe Biden said on April 14th 2021, while discussing the plan to withdraw the US troops from Afghanistan, ending the two-decade-long direct occupation of the war-torn country. With the Taliban, a reactionary fundamentalist bloc, regaining control of several parts of Afghanistan, President Ashraf Ghani’s government is crumbling. This becomes a Deja Vu moment for the Afghan nation’s history.

The US decision to withdraw troops from Afghanistan by September 11th 2021, as per its agreement with the Taliban, became one of the biggest humiliations for the imperialist warmonger. After Korea, Vietnam, El Salvador, Congo, Iraq and Syria, Afghanistan added another badge of shame on the US imperialism, which has been ferociously seeking world hegemony since the second world war.

A joint study by the Watson Institute, International & Public Affairs, Brown University, and The Frederick S. Pardee Center for the Study of the Longer-Range Future, Boston University, showed that nearly 238,000 to 241,000 people have died in the Afghanistan war. An estimated 71,344 civilians have been killed in Afghanistan and Pakistan during these 20 years. Around 2,442 US soldiers and 1,144 NATO or allied soldiers have been killed in action, while 66,000 to 69,000 Afghan government troops and militia soldiers also died in action. The Taliban and its allies lost 84,191 soldiers, with 33,000 of them being killed in Pakistani territory.

So far, the study shows, the US has spent $2.26 trillion in the Afghan war, which was launched against the Taliban by George W Bush’s imperialist regime in October 2001. Mr Bush, a reactionary fascist, used the terrorist attack on September 11th 2001 as a subterfuge to launch an attack on a foreign country and occupy it using the American imperialist cliché of “delivering freedom”. Thus he named this imperialist colonisation drive– “Operation Enduring Freedom”. It was his successor Barack Obama—Biden’s former boss—who elevated the Afghan war to a higher level, aggravating America’s ignominious defeat in the hands of the Afghan people.

“Today, we focus on Afghanistan, but the battle is broader. Every nation has a choice to make. In this conflict, there is no neutral ground. If any government sponsors the outlaws and killers of innocents, they have become outlaws and murderers, themselves. And they will take that lonely path at their own peril,” Bush said during a televised address to the US people on the eve of launching this barbaric war on poor, war-torn Afghanistan. The Afghan war popularised Bush’s infamous “you’re either with us or against us” dichotomy, which became the official foreign policy of the imperialist state. The very man, who was driven by hubris in November 2001 and thought he is able to choke the Afghan people who didn’t surrender to any foreign power before and defeated the mighty forces of British imperialism and Soviet social-imperialism, is now lamenting the loss of the war. The war he thought he won.

In an interview with the German international broadcaster Deutsche Welle, Bush said he is “sad” hearing President Biden’s decision of American troop withdrawal from Afghanistan. He showed false concern for Afghan women. “I think the consequences are going to be unbelievably bad. And I’m sad. Laura (Bush) and I spent a lot of time with Afghan women. And they’re scared,” Bush told during the interview when he was asked whether he thinks the decision to withdraw the US troops from Afghanistan is a mistake.

All these are said by Bush in a saintly way after surviving on the blood of innocent Afghan and Iraqi people during his eight-year-long presidency. Bush conveniently hid the fact that the US and its allies are responsible for killing thousands of those civilians themselves. Hundreds of women have been tortured, killed and raped by the US, NATO and Afghan puppet government’s forces in Afghanistan, who don’t treat the women any better than the savage and misogynist Taliban. Moreover, the US ally Afghan officers routinely sexually abuse boys held captive as per the “bachha bazi” custom that was banned under the Taliban. The Guantanamo Bay torture centre narrates the horrible tale of barbaric persecution of the war prisoners under Bush. Now, when he show concern for Afghans, hypocrisy reaches a new level.

There was a set of hidden reasons behind the glorified mission of defeating terrorism in Afghanistan. It’s true that the Taliban had close ties with Islamist terrorists funded by the US lackey Pakistani state, but it wasn’t the Taliban who blew the twin towers of the World Trade Center in New York City. The September 11th attack on the US was allegedly masterminded and executed by its lackey Saudi Arabia’s Wahhabi terrorists, funded by a Saudi national Osama bin Laden, whose family has business ties with big American corporate houses, including Bush’s. No bombs were dropped on Riyadh or the House of Saud, rather, they continued getting more military aid from the US. Today, the Saudi monarchs are American allies in the “war against terrorism”. This is how irony looks in the real world’s context.

The US attacked and occupied Afghanistan as it wanted to control the Turkmenistan–Afghanistan–Pakistan–India (TAPI) pipeline project. It was keen to establish control over the Afghan mineral deposits and fund opium cultivation in the country. The US needed Afghanistan in its mission to militarily encircle China, to keep Iran under pressure and to build a strong military base in the NATO-controlled Central Asian Republics to reduce Russian influence in the region. Now, 20 years later, the India-Pakistan tension didn’t allow TAPI to materialise. Mineral extraction from Afghanistan didn’t go as per the American plan. Rather than keeping China cocooned, the US occupation of Afghanistan helped Beijing woo Pakistan in its ambitious Belt and Road Initiative and build up infrastructure in the Islamist country. Rather than having Russia meltdown under its military pressure, the US watched Moscow gradually poach Islamabad to its sphere of influence and even organise a dialogue with the Taliban, which outsmarted the American imperialist strategists.

As the US now runs out of the country, the tall talks of building a futuristic Afghanistan, using puppets like Hamid Karzai or Ghani, now mock the imperialist superpower. The Afghan Constitution that Karzai’s regime had adopted was hailed by Bush. The constitution is now found in the trash bin as the very Taliban that once metamorphosed from the CIA-funded Mujahideen and then ousted from power by the US imperialism, is now breathing on the neck of Ghani’s puppet regime.

The intensity with which Biden is now defending the decision to withdraw the US troops and pushing Ghani and other American puppets under the bus, shows the sheer crisis that has engulfed the US economy. At one point in time, Bush advocated “Marshall Plan” for Afghanistan, while now Biden claims that Afghan nation-building isn’t Washington DC’s job.

To mask the ignominious defeat in the Afghan war, Biden claims that the 75,000-strong Taliban isn’t any match for the 300,000-strong Afghan forces commanded by Ghani’s butchers. However, though the Taliban doesn’t have a large army, it has successfully capitalised upon the people’s hatred against the US occupation and the puppet government’s servility to Western powers. The pseudo-Islamic nationalism peddled by the reactionary Taliban is appealing to the masses and many of them are joining the bandwagon to get rid of foreign domination in Afghanistan. If the Taliban is not a threat then why did Donald Trump’s regime and Biden’s regime negotiate with it at Doha? Why the duo agreed on an exit strategy of the US forces while the Taliban will concentrate on wiping out the Afghan government troops?

Summing up the situation in a concrete and realistic way, the leftwing Afghanistan Liberation Organization stated in 2019: “The US knows that the Afghan people, with anti-fundamentalist independence seekers as their vanguard, will ultimately rise against the Taliban and the jihadi criminals. It is due to this realization that the US strategy of collusion with the fundamentalists in Afghanistan is a continuation of its strategy in Iraq, Syria and Libya –the replacement of Saddam, Qaddafi and Bashar Al Assad with fundamentalists. In the same manner, the commonalities that bring the US and the Gulf states together are the same that will keep the US allied with the Taliban and their ilk. Just as the coming to power of leftist revolutionaries in Iran was a nightmare for the imperialists –for the prevention of which they gave aid and succor to Khomeini– in the same manner they will allow any reactionary force of the ilk of the Taliban and the jihadis to come to power in  Afghanistan, but will not allow entities that stand on independence, democracy and progress. The traitorous and  predatory regimes of Karzai, Ghani and Abdullah, under US tutelage, will continue to rule, unless they are taken down by  popular uprising.”

The history of Afghanistan’s history since the 1970s prove that no murderous regime can rule the country with impunity as the Afghan people are uncompromising when it comes to their independence. Dictators like King Zahir Shah, Mohammad Daoud Khan, Nur Muhammad Taraki, Hafizullah Amin, Babrak Karmal, Mohammad Najibullah, Ahmad Shah Massoud, Abdul Rashid Dostum, Gulbuddin Hekmatyar, Mollah Omar, Hamid Karzai, Ashraf Ghani, were and are effaced efficiently and dethroned. It’s to be seen if such bloodthirsty dictators can be obliterated from the course of Afghan politics and a new era can start.

The US occupation of Afghanistan has been one of the gloomiest periods of the nation’s lifespan. However, unfortunately, under the Taliban, the common Afghan people won’t enjoy a post-colonial freedom era. Rather, the regressive, pseudo-anti-colonial Taliban will impose a sclerotic regime that will also gag the people’s voices and suppress their rights. For a freer and better Afghanistan, the people must be united and organised by a progressive and democratic force that is secular, anti-feudal, anti-imperialist and anti-patriarchal. It’s a new struggle for liberation, which the Afghan people must wage to establish a true republic and the real democracy that will manifest their political will and carry out their economic welfare to build a modern, prosperous and independent Afghanistan.