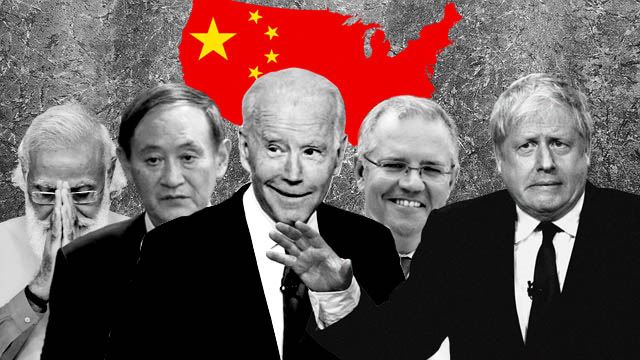 Indian Prime Minister Narendra Modi is visiting the US on September 24th for a Quad summit in Washington DC. Other Quad partners, Australian Prime Minister Scott Morrison and Japanese Prime Minister Yoshihide Suga will also join the summit. The Quad is an anti-China military group led by the US, which aims to militarily confront China and to establish a military hegemony of the US and other Quad members in the South China Sea and the “Indo-Pacific” region.

The Quad summit is supposed to lambast China, probably without naming it as per practice, and will up the ante in the region with more military drills violating Chinese sovereignty in the South China Sea region. The US has been using its allies like Australia, India and Japan as pawns to revive a Cold War-era rivalry, which the Chinese have been opposing. While the members refuse to accept that the Quad is an anti-China clique, its activities never hide the fact. Chinese experts said that the hostility will continue even after this summit.

The Chinese foreign ministry has criticised the Quad summit to be held in Washington. “It is China’s consistent belief that any regional cooperation mechanism should follow the trend of peace and development, and help promote mutual trust and cooperation among regional countries rather than target the third party or undermine its interests,” Chinese foreign ministry spokesperson Zhao Lijian was quoted by The Hindu.

“Forming closed and exclusive cliques targeting other countries runs counter to the trend of the times and deviates from the expectation of regional countries. It thus wins no support and is doomed to fail,” Zhao also said.

Recently, US President Joe Biden asserted that the UK, an old American war-crime partner, has joined the grand imperialist scheme –Indo-Pacific security alliance. A new Australia-UK-US military axis is formed against China in Asia-Pacific. To showcase the UK’s allegiance to the US, Boris Johnson’s government banned the Chinese Ambassador Zheng Zeguang from attending a summer reception of the All-Party Parliamentary China Group.

To intensify confrontation with China, Biden declared that under the AUKUS (the new formation), nuclear-powered submarines will be developed for Australia. This will provoke an ugly nuclear race, the first time after the Cold War, in the region and will threaten, peace, security and stability of entire Asia.

In August 2021, the US began its largest global military exercise since the peak of the Cold War in 1981. This exercise, spanning around 17 time zones, involving 36 ships, 50 virtual units and 25,000 troops from the US Navy and Marines, took place from August 3rd to August 16th. It was aimed at intimidating China and Russia. Both China and Russia opposed the exercise. China asked the US to behave responsibly and not to stoke confrontation. But the US isn’t alone anymore.

Under Morrison, Australia has adopted a white-chauvinistic foreign and domestic policy. At home and abroad, Morrison, whose country is 7,470 km far from China, is stoking Sinophobia to polarise Australians. To ensure his position remains secure, Morrison is constantly using anti-China rhetoric as the focal theme of his fascist politics.

Before and during the second world war, Asians saw the grotesque face of Japanese fascist imperialism. The Japanese fascist-militarist imperialism killed nearly 3.9m Chinese and 111,606 American troops. It was the fiercest and utmost feral fascist force in the world after Nazi Germany. Biden, by allowing Suga to revive Japanese militarism, is repeating the same mistake that Neville Chamberlain did by allowing Adolf Hitler to occupy Czechoslovakia after signing the Munich Pact.

At the same time, the Indian government has given up its sovereignty by acting as a pawn of the US and its allies in the anti-China scheme. As India shares a border with China, it will suffer more in case of a full-scale war or even a border conflict. Even when India and China are engaged in bilateral, military-to-military dialogue to de-escalate a 16-month-long standoff in Ladakh, New Delhi’s unapologetic US appeasement ensures that tension between the two nuclear power neighbours continues to brew underneath.

Following the Biden regime’s diktats, the Modi regime is planning to test its 5,000-km range intercontinental ballistic missile (ICBM) Agni-V, which will have major Chinese cities in its range. China, citing a 1998 United Nations Security Council resolution 1172, asked India to refrain from such testing and constructively work towards building regional peace and stability. It’s unlikely that New Delhi will heed Beijing’s advice now.

As the Quad summit will escalate tension between the US-led military bloc vs China and Russia, the countries of South Asia and the US’s “Indo-Pacific” region must realise whether aligning with the Americans can really help them geopolitically. At present, the Afghanistan debacle of the US showed how fragile it’s as a military power. To rely on the US, which is both economically and militarily ailing, for sustenance in a complex geopolitical situation is a bad diplomatic decision. However, countries like India, whose foreign policy revolves around xenophobia and within the precinct of combatting its neighbours, will not learn to become pragmatic in approach. This tragedy is caused by the scrapping of the non-alignment principle.