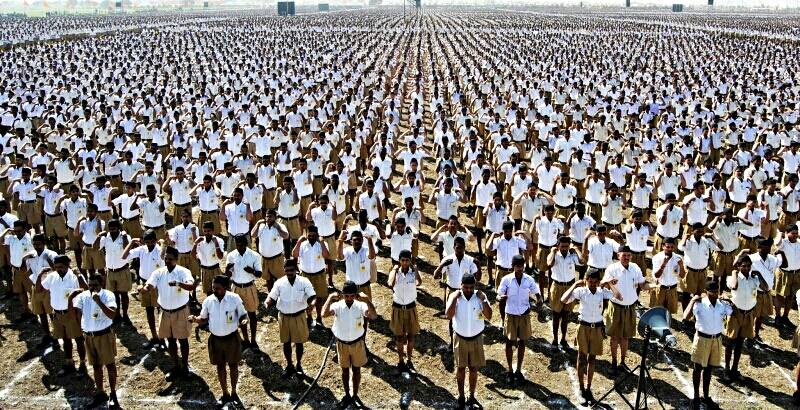 In Ahmedabad city of Gujarat, the dreaded cow vigilantes associated with the Vishwa Hindu Parishad killed the driver of a car, Mohammad Ayyub, by thrashing him mercilessly. Ayyub’s fault was that he ferried calves in a car. The police in Narendra Modi’s home turf even denied that the Muslim youth was thrashed by the cow vigilante force, though a wounded companion of the victim gave testimony in this regard to the police. It’s the same Gujarat where the Dalits led by activists like Jignesh Mevani rallied against the atrocities of the ruling upper castes under the garb of cow protection few days back. The anti-cow vigilante tirade of the Dalits even forced the hardcore Brahminical Prime Minister, Narendra Modi, to condemn the cow vigilante forces, though with Hindutva riders.

Another incident took place in Pedda village of Bijnor district, in communally polarised poll-bound Uttar Pradesh. The communally vitiated environment, created through an intense anti-Muslim hysteria aroused by RSS affiliated organisations by inciting the dominant vegetarian Jat community members against Muslims, caused a communal carnage that caused three lives and wounded 12 people. All victims were Muslims, who opposed the RSS supporters when the latter passed lewd comments against Muslim girls from Muslim family going to school. The scuffle, which immediately broke out, was sorted out by local villagers, however, armed with 12 bore guns and country made guns, the RSS supporters attacked the house of the victims from nearby rooftops. The victims were Haseenuddin, 50, Sarfaraz, 17 and Ehsan, 36. The critically injured are now treated for pellet injuries in nearby hospitals.

In Mewat of Haryana, the cow-protection department of Manohar Lal Khattar’s government first accused the Muslim biriyani sellers of using beef instead of buffoon, and then by using the police force the government started persecuting the poor shop keepers. In Mewat itself, a gang of four cow vigilantes attacked a Muslim family and killed a couple and gang raped two women, including a minor, calling it a punishment for beef consumption.

There was a considerable fear that with the advent of the Muslim festival of Eid Al Adha, a wave of anti-Muslim hysteria will be aroused and it will be converted into violent actions against the minority community in India under the patronage of the Modi led BJP government in New Delhi. Before the festival approached, the ruling dispensation under Modi’s leadership ensured that the on-going Kashmiri people’s struggle for right to self-determination can be portrayed as a communal “Muslim” struggle against India, represented by the upper caste Hindu elites. Through the attempts by Modi’s coterie Rajnath Singh, Ajit Doval and Ram Madhav, the government started showing the Kashmir issue using the prism of Islamic terrorism and bigotry. Rajnath Singh even used the opportunity to rope in Muslim clerics from all over India to use them as a pawn against the Kashmiri people and to influence the nature of the struggle in the valley.

Before the beginning of the celebrations for the Eid Al Adha, a festival of animal sacrifice, the communal tension was tuned up by the Sangh family, which use the occasion every year to portray the Muslim community as a largely violent community with no compassion for animals. The incitement of the predominant Hindu community, especially the caste Hindus, is done by demonising the culture of meat eating and by promoting vegetarianism, which is a practice of the upper caste elite Hindus of North and West India, influenced by Jainism. The RSS and its allies are trying to impose a uniform, pro-Jainist, vegetarian food habit all over the country by overriding the regional diverse diet courses adopted by the non-Hindi speaking communities. The Eid Al Adha provides them the perfect platform to kill two birds with the same stone.

As soon as the Eid celebration started on 13 September, the Sangh internet trollers started sharing a Photoshop edited photo of Dhaka streets flooded with blood of animals. Some of the regime’s supporters started spinning hate messages against Muslims by playing the cow card. In the social media the buzz was about how “inhuman” Muslims are, and how cruelly the Muslims cull their animals. People who will cheer, thump their chests and raise hysterical slogans of crooked “patriotism” when the blood of innocents are spilled on the streets of Kashmir, or when a tribal man is killed by the armed forces in the forests of Bastar, or when Muslims found their homes being burned down in Bengaluru during anti-Tamil stir, found the animal culling by the Muslims for feeding themselves and their neighbours very much “violent” and “uncivilised”.

The Modi regime, under the command of the RSS and the corporate sector, is pushing the agenda of widening the rift between the Hindu community and other minorities, especially the Muslims, under the garb of promoting nationalism. Through the web of BJP ruled provinces, the Modi regime is trying to consolidate a Brahminical theological fascist dictatorship in the country, which will be reporting to the giant corporations owned by Western monopoly and finance capital. It’s pursuing a policy to pit the majority Hindu community against the minority Muslims and Christians to ensure that the unity of the working class and toiling people is fractured and the out caste Dalits, against whom a policy of ostracism is followed by the caste Hindus, are appeased and inducted within the Hindutva fold and used as pawns against the Muslims in the greater RSS plot.

The volatile communal atmosphere will be important for the RSS to reap electoral yields, especially in Uttar Pradesh, which is under a virtual saffron siege since 2012. The RSS is getting huge amount of funding from foreign corporations and their Indian comprador allies. The saffron fascist organisation has encroached upon every sphere of decision making and cultural bodies through its money and political power. These bodies are the leading organisations in spheres like financial planning, defence and security, art and culture, science and technology, foreign policy and diplomacy, etc. One can see how fast the Indian army could implement its perception management policies under the guidance of the RSS, since Modi assumed office. In art and culture, the force feeding of a uniform Hindu community is underway aiming to establish North Indian Hindu customs on Hindus of the whole country. The fascist agenda of one nation-one culture- one leader has transformed into Hindi-Hindu-Hindustan slogan of the RSS, which matches with the zealotry that RSS promotes.

The anti-Muslim hysteria raised by the RSS will not subside with the passing of the Muslim festival, rather to consolidate the polarisation drive in poll bound Gujarat and Uttar Pradesh, the RSS will innovate new nefarious designs and strategies. The incumbent Samajwadi Party in Uttar Pradesh will try to provide utmost assistance to the saffron brigade using the hardcore Brahminical fanatic administration. As the father-son clique of ruling Yadav family will try to milk the crisis to scare and polarise the Muslim voters and keep them at bay from joining any common platform with the Dalits.