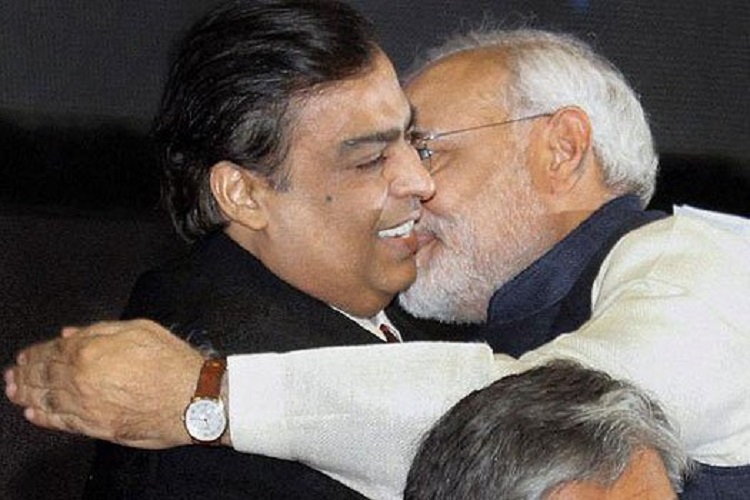 The shameful liaison between the Indian state and the exploitative corporations is nowhere more visible than in the blatant advertising campaign initiated by the Reliance Corporation with Prime Minister Narendra Modi as their brand ambassador. One should also bring to light the fact that Reliance, or rather the Modi regime, launched Reliance Jio officially on the same date as that of the historic worker’s strike in India where the exploited working class called for a nationwide strike against the anti-working class policies of the Modi government. The strike, which was successful to a great extent but the state machinery tried to stab it and overlap its achievements with the hype of Jio’s freebies. The event of Jio’s release coinciding with the workers’ movement is not a mere coincidence. In fact, on the one hand while it clearly shows the utter disregard of the ruling parliamentary forces towards the labour and labour policy in India, on a more precise look one can also see the government and the crony capitalist forces are conspiring to make the living standards of the working class more miserable and force them into a state of primitive slavery. With the price of basic amenities such as LPG,  vegetables, groceries and food items, and petrol among other things shooting through the sky, it is important to give some sense of respite through hooking them up with a 4G connection. Though it is evident that the poor and pauperised masses cannot feed their children the GBs of data that is on offer.

The Reliance group has remained close to the two largest right-wing political parties of the nation, the Congress and the BJP, however, it was the latter, which maintained a close tie up with the Ambanis, since the days of the late Dhirubhai Ambani, the founder of the Reliance group and the arch-master of Indian crony capitalism’s modern avatar. The funeral of the senior Ambani saw the flood of political leaders from all quarters of parliamentary politics, and soon after the death of Dhirubhai, the Ambani juniors launched the Reliance CDMA phones in 2003, which changed the landscape of mobile telecommunications in India. The Ambanis didn’t care for the fact that they lacked a GSM license, and therefore, used the backdoor to launch the WLL services, which they used to bring their first genre of CDMA mobiles. Though the entire telecommunication business of the Ambanis plummeted within years, the entrance itself was a market disrupting event, caused several ripples across the market. All they required was the support of a favourable government, which will overlook their misdeeds and fiddle with the norms and regulations. The Ambani brothers, united then, found extensive support from members of the Vajpayee cabinet, including the over enthusiast Minister cum Reliance agent, late Pramod Mahajan, who worked diligently to sabotage the business of the state-owned BSNL and handicap the enterprise through a course of slow poisoning.

This time the Ambanis have the unconditional backing from their Gujarati patron, Narendra Modi, whose party and its parent organisations have elevated the likes of Ambanis, Adanis and others to the defacto rulers of the country. Indian telecommunication industry is though ruled by the foreign funded Indian comprador and crony organisations, it is only the Reliance group led by the senior Ambani brother, which gets total support from the machinery of the government. It’s therefore not a matter of surprise why Ambanis paid generously for Modi’s election campaign along with Adani, and why the Reliance group is building up close ties with the RSS affiliated organisations and think tanks. The Reliance Industry Ltd is one of the major Indian patron of the Observer Research Foundation, a think tank organisation that works closely with CIA. The government patronage is not only helping Reliance to steal gas and oil for free but also helping the organisation to evolve as a military industrial organisation, which is trying to sell hardware to the Indian military as well that of the underdeveloped countries.

There are many facilities provided by Reliance Jio such as free calling, free internet and free messaging for the first three months, and a charge of fifty rupees per gigabyte after the ‘trial period’ of those three months. This so-called trial period is actually an effort to include more users under Reliance umbrella. After the humiliating fall of the BSNL, a tax-payers funded telecommunication service, which sought to provide national coverage, only private companies like Vodafone and Airtel have risen up to the task. Now Reliance seeks to reclaim the telecommunication market by giving offers of free voice calls and cheap internet. With the recent crackdown by the state on torrent sites, the sale of modems will be hampered to a great extent since all heavy data users inevitably use torrent and the broadband connection is generally used by heavy data consumers or users.

4G internet on a smartphone can be seen as a step further from broadband connection in the direction of advancement in the field of telecommunication, and since live streaming is also stated in the advertisements as effortless, this will increase the business of the American corporation YouTube in ways similar to Whatsapp after the coming of Android phones.

The middle-class is fed with high aspirations and given a technology which would connect it to the international arena forming a communication society of the elite class who would unite and exploit all other toiled classes such as the working class and the peasantry, but this is no more than a ridiculous opiate dream of the Ambanis because the technology that is peddled as something necessary by the state machinery led by Brahminical fascist forces and the market forces, is really something alien to the Indians. Individually we might use smartphones, but there still exists a social culture in India which is diverse and oppositional. This kind of technological advancement without the democratisation of knowledge and capital, by means of education, employment and raising the economic and cultural standards of the people is as important as trying to create a social whole through the technology that we currently have. As we have seen, the age of smartphones has given the giant monopoly capital owned corporations and fascist states exclusive insight into our privacy under the garb of smart marketing using the various smartphone applications or the unrequited production and distribution of pornography.

So on the one side we have free internet, access to Whatsapp and Facebook and on the other, we have the fact that only 17 percent of the population use smartphones and even if we talk about the 17 percent owning the smartphones, getting a 4G connection is not the biggest concern of their lives. However, since India is the second-largest market for smartphones in the world, the state policies on telecommunications with efforts of the crony and comprador capitalist class are directed to monopolise the open market. One wonders looking at the telecommunication sector, which was historically state funded and paid for by taxes paid by the common people, if we see it as an offshoot of the communications industry of posts, telegrams etc., which is completely gone into private hands, which sector will fall prey to privatisation and become antagonistic to the interests of the people is something we should all be conscious of. Still, the truth, which the government tries to hide but ceases to remain hidden, is the disillusionment of a large section of people over the policies and the governmental, administrative and judicial corruption of the state.  The state, therefore, is trying to appease the corporate bodies, the class of Ambanis and Adanis by hoodwinking the middle-class and tweaking their consciousness, while completely concealing the fact that the fundamental issues that Indian working class and toiled people are fighting for is affecting even the middle-class in their everyday life and the drug of 4G internet will fail like all middle-class forgotten fads, but the fighting masses of the workers-peasants-Dalits-Adivasis will keep up their struggling zeal unless and until the exploitative system that plays in the hands of the likes of Reliance and Adani group is smashed paving way to a progressive people’s rule, a new democratic rule, that caters to the basic needs and aspirations of its citizens rather than filling their heads with false consciousness.