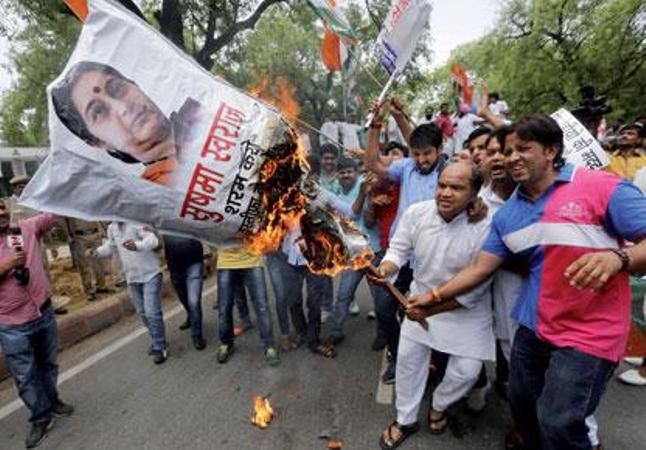 (This article was first published in July 2015 in the previous version of People’s Review. Due to an incident of hacking the old website was pulled down and we could only restore the old articles in this section)

Trying their luck on the Lalit Modi saga initiated by the BJP foreign affairs minister Sushma Swaraj, the opposition parties, especially the Congress, is trying to sanctify itself from the IPL scam that started during their tenure in North-South Block and Lalit Modi was allowed to flee India and escape the legal prosecution.

It’s well understood that the Lalit Modi – Sushma Swaraj nexus is a small part of the larger web that connects the politicians of all brands of parliamentary parties and the capitalist classes of this nation and of the West. Therefore, ignoring the plight of the common people, who felt victim to the ISIS aggression in Iraq last year, Sushma Swaraj poured her humanitarian grace upon the hapless little Modi stuck in the UK with multi-billion dollars in his closet. The opposition is just performing the act of opposition, the BJP would have done the same if the Congress party was calling the shots in New Delhi, but no one dares to question the fact that how could these crony capitalists grew in this country without political patronage (the term crony would not have applied in that case)? As the answer to this question will unearth many rotten coffins buried deep in the foundation of our so-called democracy.

Lalit Modi in particular, came from a comprador capitalist family, the infamous Modi group, that has acquired a huge fortune exploiting the virtually free resources and cheap labour of India since three generations. An accused in drug trafficking in the US during the 1980s, Modi built his future in India by concluding successful deals in the entertainment business with major foreign monopoly enterprise – the Disney group. Then he used his links to gain access to the fastest money minting business of India as well as the most popular form of public entertainment – Cricket.

Since the 1980’s, especially after the first world cup victory in 1984, cricket became quite popular in India and with the process of economic liberalisation initiated by the World Bank handpicked Manmohan Singh in the early 1990’s, the foreign monopoly capital, led by US, started venturing into the sports business of India either through sponsorship or by investments in other heads of the sport. Cricket soon turned out to be a lucrative business venture and most top shot business tycoons and political stalwarts started claiming their stake in their respective state cricket boards. As these boards were the initial step to reach the ICC accredited BCCI, there was a very dirty contention between different parties aiming to control their provincial cricket boards and in many instances, such rivalries and dirty politics came out in public.

The BCCI and the provincial boards did attracted a host of political top notch personalities and business tycoons who personally never played in any competitive match, leaders and businessmen starting from Lalu Prasad, Arun Jaitley, Dalmiya, Amit Shah, Vasundhara Raje, etc. who are even not physically fit to be in a stadium, started claiming their stake in the game, as the board was not liable to answer anyone and there was ample opportunity to mint money, the capitalist – politician nexus got attached with it like parasites. The starting of the IPL was another magnificent plan to extract money by using the popularity of the new version of the original five-day long game. The cricketers were sold and bought at high prices and money was flowing everywhere. The BJP and the Congress equally played their innings in promoting the scam and insulating the scammers like Modi.

The part played by Sushma Swaraj is as tiny as a pebble in a riverbed, as she only used her connections and position to show favours to a figure who has also shown favour some or other way to her party and government. The so-called ‘humanitarian’ angle developed from the fact that Lalit Modi is a capitalist, and all ministers of all governments that survive by exploiting the present political – economic system are bound to provide similar aid to the capitalists in crisis.

Morally Sushma Swaraj and the government led by BJP is at the sloppy edge of the political see-saw and they cannot have themselves cleaned before the people of India with any sort of justification for their misuse of power. The only way left for them, and that is what the BJP has exactly taken up with active support from its long-time collaborator, Shiv Sena, is to combat the Congress and the opposition by hurling similar abuse at them and thereby justifying theft by calling everyone accomplice in the crime.

The BJP wants to justify its act of misuse of power by citing similar instances committed by the Congress regime and the Congress will throw the ball back in the court of the BJP in turn; these blame games will be continued by the right-wing parties in the parliament to fool the people in the long run. However, it is the people who are required to understand that the Congress and the BJP are the two sides of the same coin. The change of the leaders or ministers does not, at any cost, curb scams, as the scams are the by-product of the very economic system, which generates crony capitalists and corrupt politician – bureaucrats.

The corrupt practices and misuse of power are not limited to cricket only, but the union of the politicians, capitalists, feudal lords, black marketers, stock speculators, corporate sharks, and their toady media has engulfed the nation over years. The resources of the nation, right from its land, minerals, forests, to water, are opened up by the pro-corporate governments of the BJP, the Congress, and their regional allies. The rhetoric of development, which literally means development of the super rich and the elite upper-caste Hindus, including a section of the urban middle class, has turned the country into two antagonistic camps, one of those who has all, and the other of those who are losing whatever they ever had, and the crony capitalists with their feudal landlord allies are eating the cheese out of the miseries of the people.

Unless the people of the country are awakened and equipped with political consciousness, educated with the praxis of dynamism of politics there cannot be any end of the menace that threatens the existence of the common people due to its anti-people policy. Democracy is always meant for the people, in India too it is meant for the people, but only to fool them by a handful of politician – capitalists and feudal landlords. The proper essence of democracy can be felt with a mass awakening campaign which cannot happen in the corporate sponsored way, as did by the AAP and their likes, but from the grassroots, the people must be made aware of their rights and the real situation that is prevailing in the nation.